On climate change the BBC is once, twice, eight times a liar

THEY say once is an accident, twice is a conspiracy. I wonder what eight times is?

Following my complaint to the BBC about its news report claiming that African penguin populations were declining because of climate change, the BBC has now formally upheld the complaint, and logged it on the Complaints website: 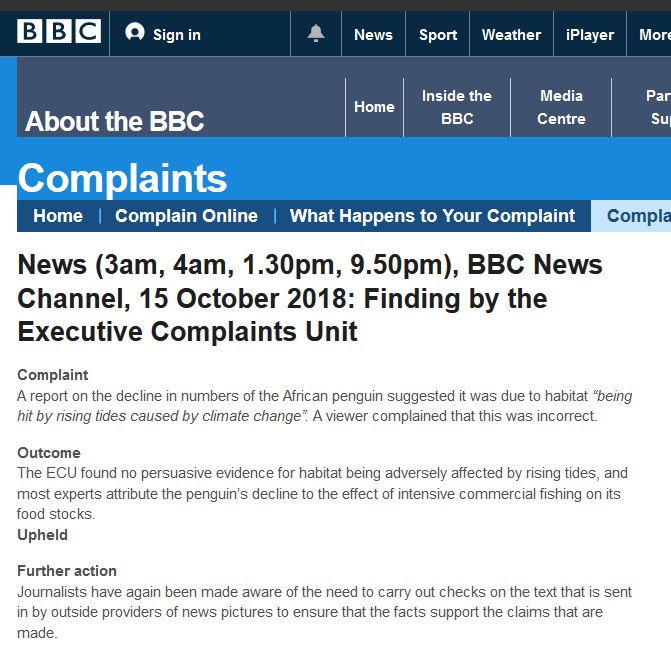 This is the eighth climate-related complaint I have been involved with which has been upheld against the BBC in the last two years. There may of course be others that I am not aware of.

In October 2017, the BBC broadcast an episode of Russia with Simon Reeve which linked the deaths of ‘tens of thousands of reindeer’ to climate change. After a complaint was submitted, the BBC accepted that reindeer populations were in fact stable or increasing.

Written by Chris Fawkes, the BBC meteorologist, it categorically stated: ‘A warmer world is bringing us a greater number of hurricanes and a greater risk of a hurricane becoming the most powerful category 5.’ The actual data shows this is simply not true, as the Intergovernmental Panel on Climate Change (IPCC) themselves have made perfectly clear. Eventually, the BBC printed a correction that their claim was based on ‘modelling and not historical data’.

In May 2018, Roger Harrabin wrote an article on the report of the Environmental Audit Committee which criticised the government’s clean energy policies. Harrabin claimed that investment in clean energy had slumped following a fusillade of policy changes, including a ‘ban on new onshore wind farms’. There has been no such ban, only the removal of subsidies. The BBC Executive Complaints Unit accepted that the article was materially misleading, and that there had been a serious lapse of editorial standards.

In June 2018, John Humphrys interviewed Lord Deben, the former John Selwyn Gummer, allowing him to get away unchallenged with wildly inaccurate claims about wind power. In particular, Deben stated that ‘even where a community wants to have an onshore wind farm, it can’t have it’. In fact there is no such ban, and the Government has actually devolved the decision to approve onshore wind turbines to local councils. As a result, the BBC Executive Complaints Unit found that Deben should have been challenged on this point to ensure listeners were not left with a materially misleading impression.

December 2018 saw an episode of the BBC Weather World programme, which was little more than a free puff for onshore wind farms. At one stage, the presenter casually commented that ‘already about 30 per cent of the UK’s power is produced by wind energy’. The actual figure is 15 per cent. Following a complaint, the BBC accepted their claim was wrong, and have now withdrawn that segment of the programme from their website.

In February 2019, Roger Harrabin covered the newly published report from the Institute for Public Policy Research, ‘Facing up to the age of environmental breakdown’. Central to the IPPR’s case was this statement: ‘Since 2005, the number of floods across the world has increased by 15 times, extreme temperature events by 20 times, and wildfires seven-fold.’ [‘Since 2005’ was subsequently amended to ‘since 1950’.] Harrabin made absolutely no attempt to challenge or query this statement, or some of the other contentious claims in the IPPR report, despite the fact that it was patently absurd. Instead his article was effectively just a cheerleading exercise.

The IPPR claim is in reality totally fake, as they misinterpreted the International Disasters Database used for their analysis. As the organisation which maintains the database makes totally clear, many disasters occurred in past decades but were never officially recorded in the database, purely because of better methods of reporting nowadays.

After considerable controversy, the IPPR made substantial changes to that section of their report, accepting that the original claims were false. The BBC then withdrew the fake claims and issued a correction.

Finally we come to the story about the decline of African penguins, which was broadcast on the BBC News Channel last October. Introducing a video report from South Africa, the presenter baldly stated: ‘The next report is about the African penguin population and how it’s rapidly declining. Conservationists are saying their habitat is being hit by rising tides caused by climate change. And it’s interesting that since that report by the UN last week on climate change, so many different organisations have been coming forward to emphasise the importance it has on their work.’

Amazingly the video which followed made no mention of climate change or rising tides at all. Zilch! Nada! Instead, the local ranger, who was interviewed, categorically blamed the decline on overfishing. This is actually very well understood by experts, such as those from the Organisation for the Conservation of Penguins. Despite the efforts of the BBC to fob off my complaint, the Executive Complaints Unit agreed that there was no evidence for the presenter’s claim and criticised their journalists’ failure to check claims.

I have no doubt that these eight cases relating to climate change are just the tip of the iceberg. Many other such fake reports are broadcast and go unnoticed.

It is also true that the BBC regularly try to fob off complainants with spurious replies, leading many to give in. This is even the case when their inaccurate claims are obvious, easily proven and factual.

Indeed, one of the things which continue to astound me is how the BBC continue to broadcast so many claims about climate change which are so utterly preposterous that even my dog would find them suspicious. Are their reporters and presenters so absorbed by global groupthink that they believe every bit of tripe and junk science put before them?

Are they just lazy?

Or are they following orders from higher up?

Unfortunately it is a fact that the BBC’s coverage of climate change has been unreliable for many years, and has long since abandoned any pretence of impartiality. It has got so bad that Fran Unsworth, the BBC’s director of news and current affairs, sent out a missive to all her staff last year, itself full of factual errors, directing staff how they should report climate change and how they should marginalise sceptical scientists.

As a result of this one-sided, blinkered approach to climate issues, the BBC frequently finds itself accused of misinformation, lack of objectivity and promulgating downright falsehoods.

But no matter how many times they have complaints upheld against them, one problem remains. The original fake news has gone around the world and back before the truth emerges. By this time, nobody actually gets to see the ‘corrections’ hidden away in the online news reports originally published months before.

Something has to change.

A version of this article was published on Not a Lot of People Know That on March 15, 2019, and is published here by kind permission.