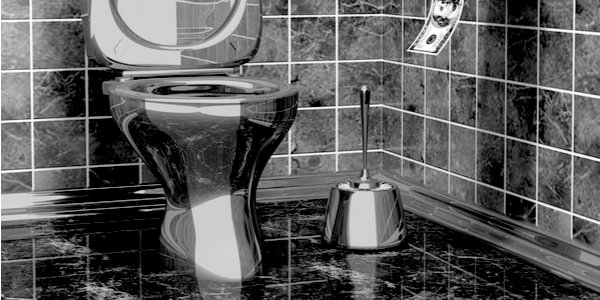 I grew up in a s***hole and spent half my life in a s***hole. I have a love-hate relationship with this s***hole. I wish past Presidents of the United States had referred to Bombay, my birthplace, as a s***hole. Perhaps their use of the acrid adjective would have shamed Bombay’s ruling classes into building toilets rather than temples.

I didn’t need Donald Trump to spill the beans on s***hole countries (or Democrat Senator Dick Durbin to fabricate this statement and attribute it to President Trump). My family woke up to the pungent reality of living in a faeces-ridden city when Uncle Alex, Dad’s younger brother, told us he was bringing his Canadian wife to visit India for the first time.

We were hugely relieved when Uncle Alex said they would be staying not with us but in a hotel. We lived in government quarters – a lone building plonked right in the middle of a slum. The sight of men, women and children lining up at the slum’s outer recesses and performing their morning rites of passage was not particularly scenic.

Millions of Mumbai’s railway commuters, forced to endure the nauseating stench of biodegradable human waste every morning, use expletives far more explosive than Donald Trump when referring to this s***hole.

What compensates for living in such a hellhole is the outstanding cultural life of the city. I sang my first Bach motet and my first Rossini opera in Bombay, saw my first Rodin sculptures in Bombay, whizzed through English literature from Chaucer to Eliot in Bombay, and worked with the finest news editors and investigative reporters in Bombay.

The winds of high culture did little to flush away the pong emanating like evil spirits from Bombay’s serpentine gullies and gutters. India’s literary geniuses have immortalised the scenes of public shame in scintillating prose. Rohinton Mistry’s novel A Fine Balance describes a slum-dweller living near the tracks who memorises the railway timetable to avoid downloading his daily output when a train is likely to hurtle past. V S Naipaul, in his travelogue An Area of Darkness, outdid Trump-speak by a gazillion miles when he wrote, ‘Indians defecate everywhere. They defecate, mostly, beside the railway tracks. But they also defecate on the beaches; they defecate on the hills; they defecate on the riverbanks.’

Yet the Indian government did nothing to improve national hygiene and provide the poor with latrines. India was a s***hole of socialism and corruption, and the two go together like strawberries and cream. I wasn’t surprised at all when the US documentary filmmaker Dinesh D’Souza, my contemporary from Bombay, tweeted: HOW S***HOLES ARE CREATED: India too was kind of a s***hole under socialism until its leaders got smart and liberalised the economy. D’Souza is married to a Venezuelan. Now she’s telling us how socialism has so impoverished the richest economy in Latin America that people have to queue for hours simply to buy a roll of toilet paper. Chavez, the hero of the Left, turned Venezuela into a s***hole.

The Left has the reverse of the Midas touch. Everything it touches turns to ordure, literally as well as metaphorically. Especially art. The Left began turning Western museums into ‘up yours’ celebrations of human excretory functions in 1917, the year of the Russian Revolution. That year, Marcel Duchamp exhibited a urinal titled Fountain. Instead of howling like a cat on hot bricks, as is the response of the media, academy and even Christian leaders to Trump’s comment, philosopher Stephen Hicks argued that Duchamp was making a provocative statement. This was his calm critique of the work of ‘art’:

‘The artist is a not great creator – Duchamp went shopping at a plumbing store. The artwork is not a special object – it was mass-produced in a factory. The experience of art is not exciting and ennobling – at best it is puzzling and mostly leaves one with a sense of distaste. But over and above that, Duchamp did not select just any ready-made object to display. In selecting the urinal, his message was clear: Art is something you p*ss on.’ The Tate Modern proudly displays a replica of this tour de force.

The American artist and photographer Andres Serrano takes this a bold step further. He calls his masterpiece P*ss Christ. The artwork depicts a small plastic crucifix submerged in a glass tank of the artist’s urine. Serrano received $15,000 for the work, and $5,000 in 1986 from the taxpayer-funded National Endowment for the Arts. Sister Wendy Beckett, a British art critic and Catholic nun made famous by her BBC documentaries on the history of art, defended the artwork by telling Bill Moyers on TV that she regarded the work as not blasphemous but a statement on ‘this is what we are doing to Christ’. I’d love to hear her response to a copy of the Koran being immersed in a similar fluid as a work of art. If a cartoon is drawn of Muhammad, it’s Islamophobia! If Christ is mocked, it’s art!

Marcel Walldorf’s sculpture of a policewoman in armoured olive-green riot control gear squatting and urinating won an award as it pushed Western civilisation and art further down the drainpipes into the sewers. Petra is a life-size sculpture made of silicone and metal. She is squatting on her haunches, legs spread, pants and underwear pulled down, exposing her genitals to urinate. The sculpture even has a mechanism by which a liquid is released from the sculpture’s genitals, but to avoid damaging the floor, a puddle of urine made of gelatin was substituted for the exhibition in Dresden.

The most expensive work of poop art is in New York’s Guggenheim Museum. The installation by Maurizio Cattelan is a fully functional toilet cast in 18-carat gold, called America. Visitors to the museum are encouraged to relieve themselves on this throne. ‘Come spend a little alone time with America, and you can ponder that meaning for yourself,’ says the museum on its website.

The meaning is clear. Guggenheim Museum invites you to defecate on America, on ‘life, liberty and the pursuit of happiness’, on the American dream, on Western civilisation and on the glories of Western art. This is the great project of the Left. It is the supreme countermove to the project of Judeo-Christianity.

When upper-caste Hindus forced Indian untouchables to work as scavengers and carry human excreta in wicker baskets on their heads, it was Christian missionaries, not Leftist activists, who touched them and told them God had created them in his image and likeness. Christianity was the only liberating solution to the worst form of racism the world has ever seen – the Hindu caste system.

It was Christianity and capitalism, not Hinduism and socialism, that transformed India from a s***hole to an economic and educational powerhouse. Donald Trump needs to use the word s***hole more – not merely to describe countries reeking with the stench of corruption, but every institution in the West that the Left seeks to pollute with its reverse Midas touch, especially s***hole art galleries and museums.

Share
Facebook
Twitter
WhatsApp
Email
Previous articleAccept it, feminists. You work less, you earn less
Next articleTrump says what everyone else thinks and it terrifies the Left