NewsPaperthe art of publishing
HomeNewsOur democracy was built on hard work and patience – not suffragette...
36 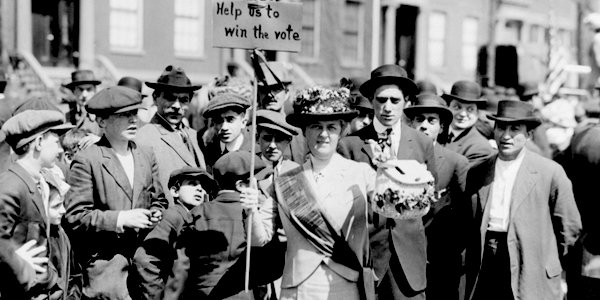 This is the last of three posts by BELINDA BROWN on the violent reality of the terror campaign by suffragettes, in contrast to the peaceful suffragists. Despite their activities, which only by luck avoided large-scale casualties, they are now revered as heroines.

In my first blog on the suffragettes I established that their campaign of violence was relentless and extensive. In my second I looked at some of the processes which turned much-loathed terrorists into the suffragette heroines we know today.

Now I will look at the widespread belief that there was enormous resistance to female suffrage, and that their violence did actually help get women the vote.

Firstly, the narrative of resistance is hugely exaggerated. Sixty per cent of men had recently acquired the vote and there was plenty of evidence that women would soon follow. For example, there were numerous massive petitions as well as many private Members’ Bills which were being forward to advocate for female Suffrage, suggesting that the idea was gaining both public and political traction.

What was not on the agenda at that time – and was more politically challenging – was the enfranchisement of working-class men. While only men of property had the vote it was politically extremely difficult to extend the vote to propertied women. This would only have increased the power of the elite and further marginalised the working class.

However Emmeline Pankhurst had no grasp of the nuances of political process. Nor did she have any interest in the enfranchisement of the working class. When in 1902 the Independent Labour Party, of which she was a member, voted in favour of a universal franchise where all adult men and women would have the vote, rather than only property owners, she actually left the ILP.

This was the point at which she set up the Women’s Social and Political Union to campaign for propertied women to have the vote. Democracy was never her aim.

This caused hostility and suspicion towards her from Labour Party members. Katharine Glasier suggested that the WSPU should more appropriately be called the ‘Society Woman’s Political Union’. Henry Snell described her as an ‘autocrat masquerading as a democrat’. Ada Nield Chew, a working-class suffragist, pointed out that WSPU policies meant ‘the entire class of wealthy women would be enfranchised . . . the great body of working women, married or single, would be voteless still’.

It was the type of suffrage which Pankhurst was after which caused the problems. But then the majority of her funding came from extremely wealthy aristocratic women who would have been unlikely to support a movement which enfranchised the working classes. In effect, she was hoist by her own petard.

This insistence on the vote for privileged women also put the Liberal Party in a very difficult position. In 1910 they had beaten the Conservative Party by a majority of precisely one. In a system where property owners had plural votes the suffragette policy was a gift to the Conservatives. As Lloyd George explained: ‘A limited female suffrage spells disaster to Liberalism; and unless you take it in hand, and take it all at once, this catastrophe is inevitable.’ In other words, first of all we need to extend the vote.

On the other hand the suffragists, a far larger grass-roots organisation, had a far more constructive response. They formed a pact with the fledgling Labour Party – the Electoral Fighting Fund – who agreed that they would not support any future bills for the franchise unless it supported votes for women as well. For their part the suffragists put their considerable resources – they had £45,000 in their kitty from subscriptions (£3.7million today) – at the disposal of the Labour Party to help fund candidates, and thereby they helped to build the Labour Party.

Through their activities the suffragists had an impact on the Liberal Party as well. Any Liberal candidate who didn’t support female suffrage would now be faced with a Labour candidate who did support suffrage at the next election. Through this strategy the suffragists were able to increase the number of Labour candidates and three-cornered seats. The turnover of Liberal candidates also went up.

In fact the Labour Party was doing so well as a result of the suffragists’ intervention that the Women’s Liberal Federation, which had provided considerable logistical support to the Liberal Party (for example canvassing and keeping up electoral registers) were defecting to the Labour Party in their droves. About 18,000 Liberal women left at this time.

At this point it seems highly likely that Liberal Prime Minister Herbert Asquith, despite his personal prejudice against female enfranchisement, would for political reasons have been very keen on giving women the vote. A majority of Liberal MPs supported suffrage, and Labour was fully behind it. Lloyd George, then Chancellor of the Exchequer, had promised George Lansbury and Sylvia Pankhurst (who had been ejected from the WSPU for her democratic inclinations) that he would not serve in a Liberal Party which was not committed to female suffrage.

There was only one thing which stood in his way: suffragette violence.

This period in history was marked by The Great Unrest. Strikes and rioting had been so extensive in recent years that 3,500 infantry and cavalry were stationed in Liverpool, warships were sent up the Mersey, and 12,000 soldiers were quartered in Central London parks.

At the same time Ulster Protestants were bringing enormous consignments of rifles into Northern Ireland to challenge the prospect of home rule. Asquith was faced with the threat of civil war in the UK.

It was really not a good time to be seen to give way to a terrorist organisation – the suffragettes – with their relentless arson and bombs.

In the end it was the First World War that did it. The registration requirements meant that many of the men away fighting didn’t meet residency requirements. Many men in the trenches didn’t even have the vote. A revision of the national register was called for.

Arthur Henderson had now become head of the Labour Party. He had been the key collaborator with the suffragists in the Electoral Fighting Fund. Millicent Fawcett found out about a forthcoming government bill and told Henderson. He then wrote a confidential memo to the wartime Cabinet suggesting revisions. These became the blueprint for the electoral reform which was discussed at the subsequent Speaker’s Conference. At any point where support for female suffrage waned Henderson made it clear that he would resign if women were not included in the government bill. The Representation of the People Act of 1918 was the result.

For one hundred years we have been told a story in which a terrorist group – the suffragettes – are heroines and martyrs winning votes for women against oppressive men. The story has served women’s interests very well. But our democracy was not built on violence. It was built on hard work, patience, persistence and ordinary political processes. And after one hundred years it is time we started telling the truth.

Information for this blog comes from Forging the Franchise; the political origins of the women’s vote by Dawn Langan Teele and The Suffragette Bombers; Britain’s Forgotten Terrorists by Simon Webb.