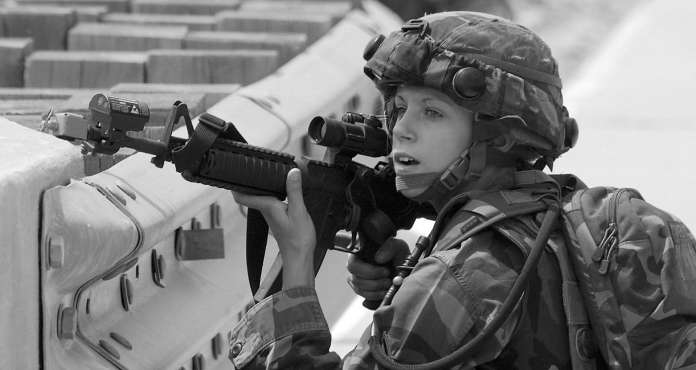 Since the 17th century the British Army has built a reputation for dogged fighting and often, indeed usually, winning. This reputation is under threat following the debacles of Afghanistan and Iraq, but its recent loss in Whitehall and Westminster eclipses even these. I refer, of course, to the admission of women to combat roles in tanks and infantry.
For readers who don’t know, combat soldiering is an intensely unpleasant and physical business. One of the fundamental requirements is strength for the simple reason that weapons and ammunition are heavy. As are infantrymen, who rely upon their colleagues to carry them to safety if they are wounded. The basic combat load is over 25 kg and infantry soldiers often carry over 40 kg on their backs. For days at a time.

The US Marine Corps completed a comprehensive study on women in combat roles in 2015. It demonstrated categorically that there was an adverse effect on capability. The Israelis tried it, found problems and abandoned it. The Russians did use women in World War Two, but not in the infantry. The US Army has allowed women into combat arms, but not willingly.

Now, women have served successfully in combat in Iraq and Afghanistan as medics, linguists, searchers etc, almost always being protected by infantry. An analogy would be the women acting as scrum halves to the infantry forwards. They’re on the same pitch hoping to achieve the same thing – but that does not make a scrum half a prop forward.

Indeed, the law acknowledges that women are physically weaker than men, ISO 11228 and EN 1005 both limit female loads to 66 per cent of the male ones. Moreover, there is increasing evidence that the shape of the female hip and pelvis is ill-suited to carrying the very heavy loads inherent in infantry soldiering. This should not be surprising to anyone with GCSE biology.

So why did David Cameron remove the bar on women soldiering in combat roles in July?

The army estimates that just 5 per cent of the 7,000 women serving could meet the required standards. Allegedly, an army review supported lifting the ban despite the facts above and in the full knowledge that the addition of 350 combat women to the infantry will increase cost and reduce combat capability. That excludes too any consideration of the additional psychological effects and impacts on small group cohesion that is fundamental to success in combat.

This decision is a reflection of the weak senior leadership of the army bowing to political pressure.

What then will happen when most of the first cohort of trainees fail (as they will)? The suspicion within the army is that test standards will be reduced. But that is just moving the problem to the front line. No enemy is going to reduce his efforts. In any case, physical tests represent minimum standards, not the limit of aspiration.

What has caused this lunacy? Feminists demanding universal equal rights for women. If the Chief of the General Staff had simply stated that all the evidence supported his professional opinion that the number of women able to reach the necessary physical standards was so low as to not merit this step, no government could. Inviting a few feminists and the press to attempt the infantry tests would have closed the debate.

Has feminist dogma now such strength that no one dare challenge it? Allow me.

For a start, there is no right to be a combat soldier. Many who want to be fail for a variety of reasons, including lack of physical strength. And the physical demands remain huge; in spite of the best efforts to reduce the load the increase is inexorable. Soldiers tend to be complicit in this and seek to carry as much ammunition as possible (if you run out of ammunition in a combat you are effectively left with a knife while the enemy has guns – there’s no future in that).

The law already accepts that women are weaker than men. The tiresome demands for equal prize money at Wimbledon always peter out when women are invited to play five sets.
Has anyone actually polled women leaving school to enquire whether they want to be in combat? This means being shot at, watching friends die and killing the enemy, with a bayonet if necessary. When not fighting, it means arduous physical training, practising living in a small metal box with seven or more men, digging trenches and living in them? There are very few women soldiers (i.e. those who know what infantry and close combat is all about) who want to be involved in it.

Theresa May is one of the most powerful women on the planet. I hope that she will realise that there are better uses for taxpayer’s money than trying to turn women into combat troops and reverse her predecessor’s ridiculous decision. She might also give the Army Board a much needed lesson in moral courage.

Patrick Benham-Crosswell is a former Army officer who spent over twenty years in commerce before starting to write.