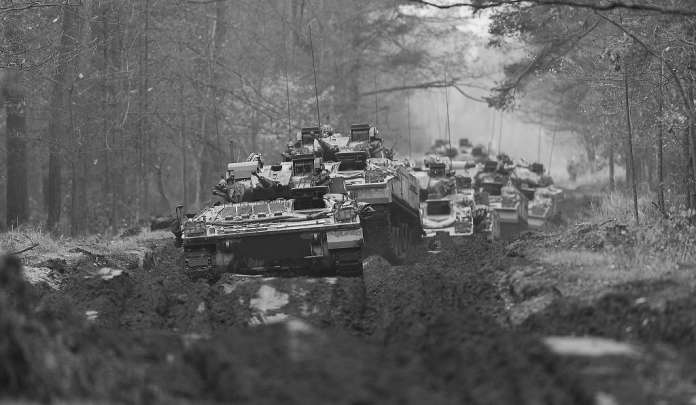 As well as reporting a Trident malfunction, The Sunday Times also mentioned an army study document, implying that there was concern that the UK could lose its only warfighting division “in an afternoon.” If they had bothered reading the paper they would have seen that the problems are much worse. Getting a UK division onto a battlefield is a pipedream.

First some jargon busting. A division is generally regarded as the basic high level formation of warfare. It comprises two to five brigades, each of which comprises three to five infantry battalions and/or armoured regiments. A brigade comprises 5,000 to 8,000 men, a division around 20,000. At the moment the British Army has one warfighting division, a spare infantry division and a few specialist brigades. That warfighting division, called 3 UK Division, comprises three armoured infantry brigades, only two of which have regular army tank regiments – the third relies on a reserve tank regiment.

There is more to a division than its tanks and infantry; it also needs artillery, engineers, reconnaissance, attack helicopters, transport and logistics, air defence, medical services and communications (which includes electronic warfare). 3 UK Division does not have all of these elements, as the paper makes clear. 3 UK Division is dependent upon “partner” assets (i.e. borrowing from US or other allies).

The last time the British Army deployed a division was in the 2003 invasion of Iraq (and that was a weak one). Since then its focus has been on the counter-insurgency operations in Iraq and Afghanistan. Simply put, it has no current experience of operating at divisional level, or even training for such operations. Sure, it does things on paper (called command post exercises) or in some simulators. But that is not field training and does not test the systems, commanders and components.

And, of course, the division is not fully manned as the army is almost 5 per cent under strength. The cunning plan in 2015 was to use the reserves to fill some gaps, but reserve manning is even worse than the army’s. The recent advertising campaign has yet to deliver much, and it takes almost a year to get from recruiting office to front line.

There is also the significant challenge of moving the division to wherever the war is. As the paper notes, the UK simply does not have the capacity to transport the division anywhere. It would either have to commandeer commercial ships, as it did successfully for the Falklands War, or seek to borrow from allies – the flaw in this being that those allies would probably be busy moving their own troops.

It might be possible to use the rail network, (all British military vehicles are re-designed to fit onto European railways – as was recently demonstrated at the Channel Tunnel). But moving a division requires an awful lot of trains. Getting from the railhead to the battlefield is another problem – the UK’s ability to transport tanks (which weigh 70 tons apiece) is limited. Driving the tanks there wears their tracks and transmissions out (typically they need replacing every 1,000 miles) thereby creating a significant logistic problem.

Mind you, before the fighting vehicles could be loaded they would have to be brought into service. At the moment, under a disastrous policy known as Whole Fleet Management, around 75 per cent of the fighting vehicle fleet is in “light preservation”, with only 25 per cent being ready to roll and being used for training.

So, deploying the UK warfighting division requires getting the vehicles sorted, making up deficiencies in manpower and finding substantial amounts of transport. We also would need to borrow a fair amount of stuff from allies to make the division credible and whole. Given that we don’t train at divisional level, a fair amount of intense training is also advisable.

The MoD’s response was “The army… is ready and capable of deploying a potent, large scale, war-fighting force at divisional level with sufficient notice.” Given that the report identifies 2025 as being the aspirational date for a fighting division to be available, “sufficient notice” translates as 8 years. Minimum.

But fret not, the spin doctors have it covered and the House of Commons is focusing on a (probably) minor technical malfunction in a Trident missile, rather than the awful truth of the parlous state of the army. The Realm is not defended.