Patrick Benham-Crosswell: Don’t panic – Russian ‘supertank’ not all it’s cracked up to be 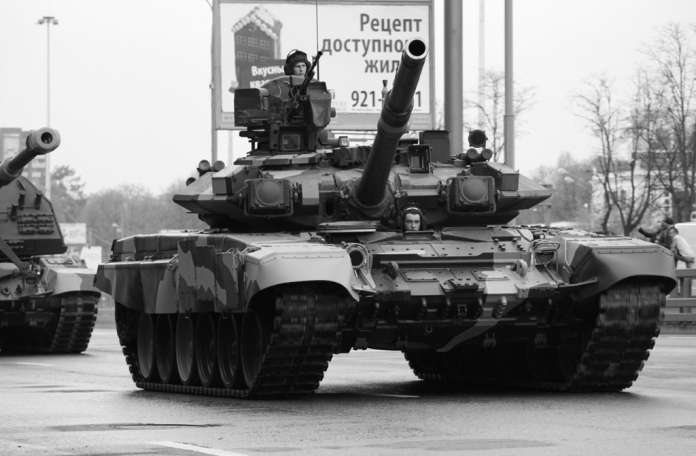 The Sunday Telegraph reports that the latest Russian tank, (the T-14 Armata), could vanquish the British Army, and indeed NATO.  Great headline – now let’s look at the facts.

The T-14 is the first deployed tank to have an unmanned turret.  This should allow it to have a larger gun in a smaller, more easily protected volume and that is indeed potentially effective.  I say potentially, because there is more to good tanks (and winning battles) than firepower – although it is important.  Having spent a decade or so as a tank commander, there are benefits to being in the turret – primarily one can see much better, and much further.  That gives better spatial awareness, which is crucial for maintaining order and cohesion in the chaos of battle.  The T-14 design has been experimented with repeatedly, and rejected repeatedly, over the years for just this reason.  Yes, modern electronics and optronics mean that it is possible to relay views from one part of a tank to others more easily now than in the 1970s. But that does not make it battle winning.

Big guns are important – in simple terms the bigger the gun the more one can kill at a greater distance.  Current Western tanks (and indeed Russian ones) can knock out opposing tanks at well over 2,000m.  What range you need rather depends on where you are fighting (tank rounds travel pretty much along lines of sight – you can’t hit what you can’t see).  In Western Europe, which is what Western kit was designed for, the average engagement range would be around 1,200m (this figure comes from the shape of the ground, and is computed from survey data).  In the deserts of Iraq it was somewhat further, as it would be on the Russian Steppes. However opening fire also gives your position away, and invites all sorts of retaliation.  That said, the current version of the T-14 has similar firepower to Western tanks.

The T-14 crew are more protected than that of any other tank.  But that does not mean that the tank as a weapon system is better protected.  A hit on the turret is still likely to disable the gun. Arguably, given the additional complexity of the T-14 design, the turret is more vulnerable than a conventional one.

The article states that the T-14 also has an integrated active defence system to defeat missiles.  These are not new; the Israelis have one in use on their latest Merkava.  And it won’t work against an incoming tank round.  Most Western countries are investigating retro fits (there are other issues that make them more complicated). The article also, rightly, makes the point that the British Army tank strength is risible in terms of numbers and the Challenger2 is an old design in need of an upgrade (which it is getting). It also (rightly) questions whether the Army’s new reconnaissance vehicle is going to be all that was hoped – although that is a different story.

Where the article is spot on is that the concerns over casualties from IEDs (Improvised Explosive Devices) in both the Iraq and Afghanistan campaigns have meant that the British Army has ignored tanks.  For historic reasons, the British has always had a bias towards infantry, and that has got out of hand in the past decade or so.  The article also, rightly, makes the point that the British Army tank strength is risible in terms of numbers and the Challenger 2 is an old design in need of an upgrade (which it is getting). It also (rightly) questions whether the Army’s new reconnaissance vehicle is going to be all that was hoped – although that is a different story.

If the British people wish to continue to benefit from an Army that can fight any enemy, anywhere then they need to have a long hard look at its ability to fight armoured warfare (which remains the method of choice for those with ambitions of territorial expansion, like Putin). We can probably just about do it now, but it is on the limit of both the equipment, the numbers and the level of training. Increasing our capability to what is necessary will not come cheap, and will probably need rather more than the 2 per cent annual increase in current plans.

It is not quite time to panic – the T-14 is not a “supertank” and has not altered the balance of power.  However, it is time to take a long, hard and critical look at our military capability in the light of possible future conflicts.