Patrick Benham-Crosswell: Nato is a paper tiger east of Poland 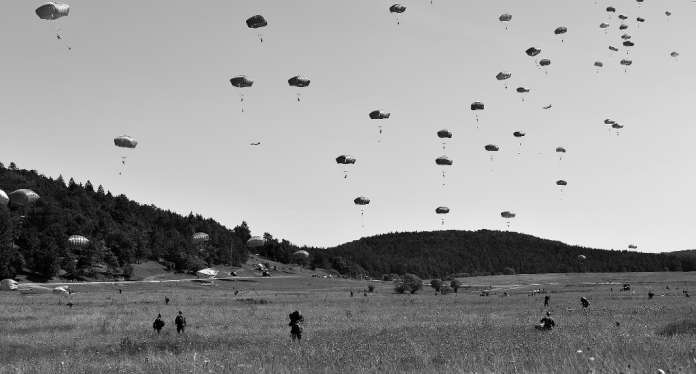 Putin is deploying more missiles into Kaliningrad (the Russian enclave at the southwest corner of the Baltic, bordering Poland). The media is concerned that some of these are nuclear capable and have the rang (500 miles +) to hit European cities.

The reality is rather different. The Iskander ballistic missile is a replacement of the Scud. Its 750kg warhead (about the size of one Western bomb) which can manoeuvre aggressively to evade anti-missiles. Its prime job is to hit high value targets such as command centres, airfields (and aircraft carriers). Yes, it can carry a nuclear warhead but if Vlad wanted to drop instant sunshine on Berlin, he already has other systems that can do it far more effectively from places other than Kaliningrad. This is not some rerun of the Cuba Crisis.

The other missile system being deployed is the S400, which is a system of various anti-aircraft missiles capable of engaging aircraft from ranges over 250 miles down to short range. It is, by all accounts, a very capable system.

Putin is doing this because he is concerned about the expansion of Nato to the Baltic states. While this is not new, post-Ukraine Nato has been keen to convince itself and its members that the Balts are full members, and an attack on them is an attack on all. In support of this proposition, the UK has deployed a battlegroup of about 1,000 men to Estonia. Other Nato countries are taking similar action.

As I have written before, the reality is that fighting a war against Russia in the Baltic states is very difficult; winning it would be a challenge. The reason for this is simply that the Nato lines of communication are long and vulnerable, both on land and at sea. The Russian ones are not, and the existence of Kaliningrad makes the Baltic a very hard place for Nato navies to survive in. That was true before this Russian deployment; nothing much has changed.

Nato has brought this problem upon itself. The harsh reality is that while Nato may well send more troops to oppose a possible Russian invasion, it is unlikely to ever be able to send sufficient numbers to provide a credible deterrent. To be credible those troops would also have to be supplied with all the ammunition that they might need for a war; that scale of deployment is not yet envisaged.  Were it to be undertaken, Russia could reasonably point out that such a deployment was very close to a declaration of war. It could well interfere with assets moving by sea or air (akin to the Cuba blockade).

The Cuban analogy goes further. That island was used as a proxy to irritate the US throughout the Cold War. However, the Cuban crisis demonstrated to the Soviet Union that the island was exceptionally vulnerable.  Khrushchev backed down rather than face Armageddon. The Baltic states are now westernised. But they are not easily defensible. Nor, I suspect, does Nato have the resources or political will to go to war if (say) Estonia requested that following a Russian invasion.

The Russians have feared Nato since its creation. However, Nato is now over-extended, militarily run down and a paper tiger east of Poland. If Mr Putin wants to invade the Baltic states he can, unless those nuclear capable Nato members (the UK and the USA) are prepared to deliver Armageddon, and shoot first. I don’t think that we are. You probably don’t. Mr Putin believes that we won’t.

Which, I’m afraid, means that Nato as constituted is not viable. Given a United States that is bored of shouldering much of Europe’s defence costs and member states that are not prepared to fund adequately their armed forces (and that most certainly includes the UK), it is perhaps time for us to move on. Soviet-era Marxists will chirp that the decadent West has been the architect of its own misfortune. I’ve an awful feeling that they are right.