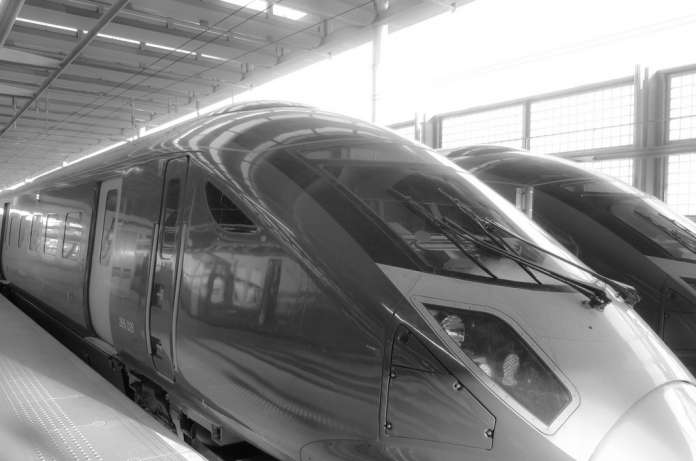 The Coalition is changing the way the country’s democratic principles are interpreted and in a manner that owes much to Orwell’s 1984  (The Ministry of Truth and all that).

HS2 is an issue that illustrates much that is wrong with Westminster and the operation of parliamentary democracy. What is galling is that Parliament is so permissive over this matter and takes issue with trivia.

Parliament has colluded with:

On 23rd June 2014, Mr Justice Singh granted permission to the Information Commissioner to proceed with a judicial review of the Government decision not to publish a report into HS2, a report which showed the project was in danger of failing. Since a request in May 2012, ministers have withheld a critical report from Parliament (from the Major Projects Authority) which rated the HS2 Rail project as ‘amber-red’, despite the Information Commissioner ordering its publication.

The Secretary of State for Transport, Patrick McLoughlin, scuppered a tribunal investigating this matter in December 2013, less than 24 hours before a public hearing concerning publication of the report was to start.

Vast amounts of taxpayers’ money (£75bn) are to be spent despite the fact that the public has clearly voiced support for other more pressing priorities. HS2 is Cameron and Osborne’s pet project.

There is another exemplar of the perverse processes of Westminster – that of the (London) ‘housing issue’. Foreign Investors whose funds are welcome in the UK are forcing up the prices. Those dispossessed are scrabbling for alternatives in the south east.

The official solution is to raise interest and mortgage rates, ration mortgages and introduce “mansion” taxes. Such measures will disproportionately effect those in the south east already saddled with spending a disproportionate amount of money on housing compared to their more northerly compatriots. This will  force more Londoners out of London.

Perhaps this is why HS2 is needed:  to solve the London housing problem and bring Birmingham, Leeds and Manchester within commuting distance of the capital.

Then there is the interesting ‘land grab” issue and the denigration of the AONB contrary to national policy. CPRE have produced maps showing the effects of HS2.  They have three maps, showing the landscape impact, the operational impact and the construction impact. They can be viewed here.

David Cameron is man of dubious integrity and wisdom, as evidenced by his stance at the EU presidential election and his decision to employ convicted  phone hacker Andy Coulson.

HS2 is about the only thing currently on track for the Prime Minister (I don’t believe the economy is actually thriving – it is simply national and private debt that is growing).

The project is being driven by a ‘hands off’ quango HS2 ltd that has already absorbed many ministerial staff on secondment and spent a fortune.

Now, acting like Pontius Pilate in sheltering behind its quango, the Government is trying to gag the two national groups opposing HS2, by legally challenging their right to appear in front the Parliamentary Select Committee of MPs examining the details of the HS2 Hybrid Bill.

HS2 Action Alliance and Stop HS2 received official notice from Government/HS2 ltd solicitors on Friday June 20th (always a Friday) that HS2 ltd were opposing their right to be heard by the Hybrid Bill Committee, despite the fact both groups have already appeared before the Committee, when they were called to give evidence at their first public session on Tuesday May 13th. The legal challenge will be heard.

Yet the two groups represent over 100 action groups across the country opposing the £50 billion line.  They work closely with councils, individuals and businesses affected by HS2. There will now be hearings to decide whether Stop HS2, HS2 Action Alliance and other groups and individuals, whose ‘locus standi’ has been challenged, can petition and explain in detail the failures of the current plans in terms of environmental damage, impact of noise, poisoning drinking water and property blight. These hearings will take place over four days in July.

Joe Rukin, of Stop HS2, said: “We are absolutely amazed that the Government wants to block us from giving evidence to the Hybrid Bill Committee. “We work on behalf of over 100 action groups, yet HS2 Ltd are trying to claim that we do not represent anyone affected by HS2!

“HS2 ltd do not want us to appear because they fear what we will say, and are trying to squirm away from MPs hearing the truth about their incompetence and arrogance over the last four years.”

Hilary Wharf, director of HS2 Action Alliance, added: “The Government is sinking to new lows by trying to deny us the right to explain to the Hybrid Bill committee the very serious issues with the current plans. But, of course, if you know that what you are selling is fatally flawed you are tempted to resort to any action, democratic or not, to make sure that you force it through. It is sadly just further evidence that HS2 is all about politics rather than transport.”

“This is the last in a series of undemocratic actions from the Government as they try to force through the highly controversial line with the absolutely minimum of public scrutiny.”

A Department for Transport spokesman retorted: “Parliament is clear that a campaign group, which is not composed of individuals directly and specially affected, but which simply opposes the principle of the Bill, cannot petition.”

George Orwell also wrote: “Freedom is the right to tell people what they do not want to hear’.

And that includes the right of the Public to speak to the Government.