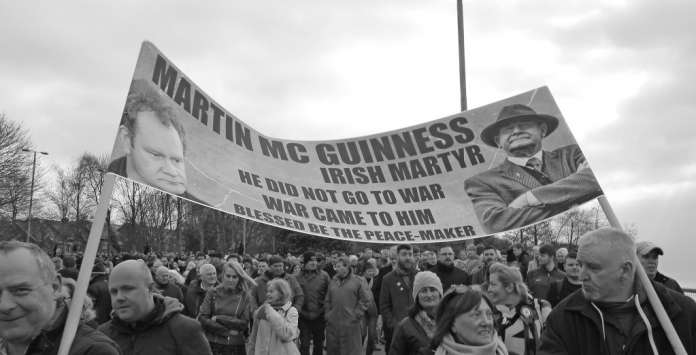 The theatre of British public life has many character types. One is the hate figure. For the quarter-century after the end of the War, this included Sir Oswald Mosley. Mosley was Britain’s home-grown fascist leader in the 1930s. He checked all the boxes: charisma, demagoguery, uniforms, jackboots, raised-arm salutes, street marches, rallies, street fighting, and anti-Semitism. Given this country’s fight against continental fascism, Mosley was widely regarded as more of a traitor to our country than the Cambridge Five. He was voted the country’s Worst Briton of the Twentieth Century in a history magazine poll.

It was, therefore, a surprise to a lot of people that, when Mosley passed away in 1980, the broadsheet obituaries were rather reverential. The BBC even lampooned this on ‘Not the Nine o’Clock News‘. Mosley was a veteran of the Great War and a rising star in the House of Commons. He ended up as a Minister Without Portfolio in Ramsay MacDonald’s second Labour government. He was at the time seen as a future Prime Minister.

Asked to suggest solutions to the Great Depression, he advocated increased state ownership and massive investment in public works in a socialist programme that was years ahead of its time. This was struck down by the Labour Cabinet; there was a requirement to reduce the deficit. Mosley quit the government in a huff and formed a party that evolved into the British Union of Fascists. By the time the National Government accepted deficit financing, Labour had been banished to opposition, and Mosley had entered the Pit. His early promise forgotten, his reputation was ruined.

By contrast, the late Martin McGuinness emerged from the Pit in the 1990s and was widely eulogised this week as a major actor in the ‘peace process’ in Northern Ireland. For this, he ended up before his passing being co-leader in a power-sharing administration in Ulster as Deputy First Minister. He has been celebrated and honoured like the Prodigal Son. However, instead of spending his inheritance and repenting, McGuinness had been involved in something far darker, as a key figure in a terrorist organisation. He did not repent.

When news organisations, led by Channel Four, started broadcasting interviews with Gerry Adams and Martin McGuinness in the late 1980s, the public’s main reaction appeared not one of revulsion for all the murders committed by the organisation whose political wing these men claimed to represent, but curiosity at exactly what the public face of terrorism in the UK had to say for itself.

Adams and McGuinness chose their words as carefully as a lawyer, or indeed a politician. They condemned all violence, conflating the legitimate violence practised by the State to protect the population with that designed to cause terror and fear. Equivocation over murder was uncritically portrayed by broadcasters as reasonable, perhaps as part of the ‘peace process’.

Sinn Fein’s spokesmen, when they emerged, seemed to be normal human beings instead of raving psychopaths. Apparently, it is okay to be a random serial killer if it is in the name of a kind of politics instead of personal gratification. They had support from mainland UK politicians, including our current Leader of her Majesty’s Loyal Opposition, of which more later.

McGuinness’s ascendancy to a senior statesman in Ulster was based on two factors. The first was the usurping of moderate nationalism by militant republicanism in Northern Irish politics during the Troubles, surely aided by the ability to influence voting patterns in communities where the consent to be lawfully policed was not a given. The second was McGuinness’s ability to turn off the violence emanating from the terrorist organisation in which he played a leading part. A compelling, but imprecise analogy would be if the Yorkshire Ripper was given a seat on a women’s liberation committee after he unilaterally suspended his campaign of night-time murders.

McGuinness’s republicans had a clear goal and used violence to try to achieve their aim, which was a united Ireland whether the people of Ulster wanted it or not. In this they failed, a largely unrecognised victory for our security forces. But unlike nation states, terrorist organisations seem unable to unconditionally surrender. Instead there was political compromise that goes on to this day. A policy of murder did lead to political power. Men who had committed heinous crimes had their convictions nullified. Murderers on the run were promised there would be no further investigations. The criminals were off the hook.

This is not without precedent. An Act of Oblivion pardoned anyone guilty of a crime committed during the English Civil War, The Commonwealth, and Protectorate so long as it was due to an order from the Crown or Parliament. Civil wars are governed by different laws to civic peace.

It is said by the misguided that ‘one man’s terrorist is another’s freedom fighter’. Ronald Reagan has the best demolishing of this assertion. Unborn babies, children, teenagers, mothers, pensioners, musicians, horses and their riders, shoppers, and drinkers in pubs were but a few of the types of innocent victims of McGuinness’s ‘armed struggle’. The 42nd President of the United States came to his funeral. The wife of this former President wanted to be the 45th.

Western democracies have few answers to terrorism if they wish to remain democracies. The only countries that have not had to endure terrorist campaigns seem to be the most violent dictatorships. Stalin’s Russia and North Korea seem immune to terror, or they have not let on, but this is because it was the State that practised terrorism on its captive peoples.

The career of McGuinness and the manner and commemoration of his passing represent an anomaly in democratic politics. Terrorist insurgents, hiding in plain sight while they practise their evil trade, are demonstrably able to gain a seat at top table based on a promise to negate their threat to the population in return for amnesties. Unlike democratic politicians, there is no positive value on offer to the public. Thus violence or its threat seems to have an entry point in our democratic political system that should only belong to lawful persuasion by rosetted hopefuls. If this is not exclusively due to the path of Irish history, it remains a worrying and as yet unsolved conundrum about modern democratic politics.

No article about republicanism in the UK can be complete without a brief word about Jeremy Corbyn and John McDonnell. These two claim some part in the growth of peace in Ulster due to their engagement with Gerry Adams et al for over three decades . This is not backed by events. Their purpose was not peace, but to weaken the United Kingdom and its institutions as part of the Marxist-Leninist playbook. McGuinness had a major role in the ‘peace process’. Corbyn and McDonnell had none that can be detected or has been successfully claimed.

The British Government, without Corbyn’s ‘help’, achieved compromise among the interested parties, even those that practised violence. The current Leader of the Opposition just wanted defeat and surrender as a part of his dystopian ambitions.