NewsPaperthe art of publishing
HomeNewsPaul T Horgan: Once again we have a handbag to defend us
12

Paul T Horgan: Once again we have a handbag to defend us 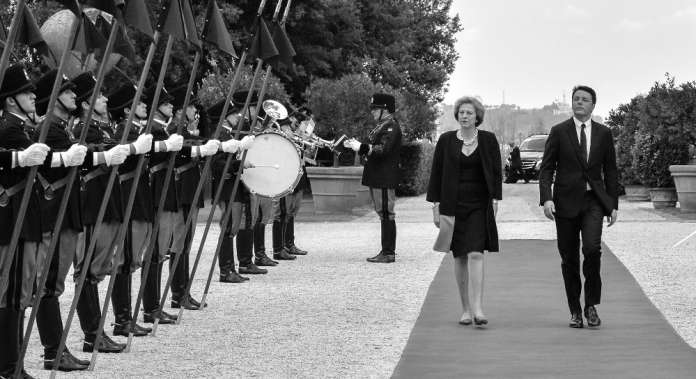 Trump’s election is not last week’s news. It’s the week before. The liberal media elite cannot stop reporting it. They seem to believe it is possible to rewrite history by wasting their editorial budget in overzealous scrutiny of an event they do not like. Trump is not due to take office for over sixty days and the wronged media are aching to find any kind of fault or error to magnify in a way to invalidate a democratic vote of a free people. And news organisations wonder why the public like journalists as much as they like their politicians, which is not much. Apart from one blond tousle-haired journalist-politician, it appears.

Another event unfavoured by the liberati is Brexit. The narrative is developing that the UK will get a bad deal out of Brexit.

Well, it’s true. The UK will get a bad deal out of Brexit.

The reason we are having Brexit is because we were getting a bad deal while in the EU. David Cameron went to Europe with openly announced negotiating positions on the UK’s EU membership and came back with his tail between his legs. The European politicians humiliated our well meaning and decent former Prime Minister and probably lost him the referendum, his job and ended his political career. They did not care.

Cameron tried to make the best case for the EU in the referendum, but had to resort to wild dystopian predictions to scare people into remaining. Unlike the Scottish independence referendum, there was no last minute ‘vow‘ from Brussels to swing the polls.

These Europeans are simply not our friends, if they have ever been so. Perhaps they resent us for being able to liberate them from tyranny when they could not do so themselves for reasons they cannot face. Peoples ashamed of their history might resent those that have related reasons to be proud of theirs.

Commentators should take lessons from how we entered the EEC. It was prolonged and messy, even after we joined. This was not a courtship, where the participants got to know and love each other better over a number of years. There were numerous vetoes by the French spurred on by an irrationally vengeful De Gaulle apparently channelling the disastrous vanity of Napoleon III. The deal was seen as so bad by elements of the British government in the 1970s that it resorted to a referendum to confirm it barely two years after we joined. The financial agreement was so unequal that Margaret Thatcher was able to force her reluctant counterparts to concede permanent rebates of billions of pounds until Tony Blair gave part of them away following French complaints. And now some German politicians are suggesting that the UK will be paying in to the EU until 2030, if not longer. So what’s new…

The opposition parties demand the Government is open about our negotiating position, forgetting how well that turned out for David Cameron, or perhaps remembering all too well and trying to use pressure to lure Mrs May into a trap she is avoiding. Give it up, Angus and Jeremy, and move on. You’re boring us. And Angus, you really have no other use for your three PMQ questions, especially since your party actually wanted to leave the EU two years ago.

Countries always enter negotiations fighting for their corner and act exclusively in their own best interests. Labour and the SNP want the Government to be seen to fail, even if it actually does not, as this is in their political interests. The EU want the UK to get the worst possible deal to deter further defections of nation states from its faltering collectivist project. Various direct and indirect beneficiaries of Brussels’s largesse want the Government to stumble and fall so a historic ignoring of a democratic will of the people may take place.

Brexit is going to be a dirty business, but then so was Brentry. Tinpot corporate tax avoidance facilitators like the unpleasant wine-loving Jean-Claude Juncker will see to that. Formerly a finance minister in a country whose population is little more than that of Sheffield’s, but who diverts multinationals’ taxes in grubby sweetheart deals away from the countries that deserve the revenue, the fate of the EU is being left in the hands of a man who in the UK would be little more than a dodgy municipal treasurer, and not even one good at concealing his various questionable schemes. So all this hand-wringing is moot.

So, discount all the naysayers. They are right. But that is only because the EU has been built on historical bad faith by damaged countries, and borne of misplaced arrogance and the elevation of the wrong leaders as regards its relationship with the UK. It is a good thing we once again have as Prime Minister a person who is accustomed to carrying a handbag to EU summits.