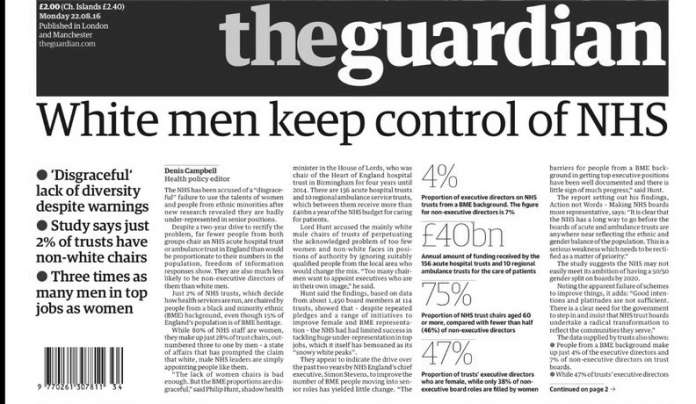 A newspaper whose main attribute is leaking cash as it squanders the capital raised from the sale of Auto Trader.  It is certainly succeeding in a quasi-socialist redistribution of irreplaceable wealth while not creating any more for its hapless owners.

The front page of its print edition for Monday may explain why it is such a turn-off for the buying public, apart, of course, from all those taxpayer-funded institutions, like the BBC, that buy thousands of copies for their right-on staff to peruse when they should be working.

The Guardian has no front-page celebration of Team GB’s Olympic glory.  The victories of elite sportsmen and sportswomen, elevating our small islands to the status of sporting superpower presumably offends their socialist sensibilities.  Perhaps there is an editorial policy that the the Union Jack can never grace the front page in a positive way.  This would not be too surprising. What a bunch of sad killjoys on that paper. But it gets worse.

Their main article is headlined ‘White Men Keep Control of NHS’.  Consider these words.  If any other combination of race, gender, sexual orientation or religion was used, the headline would clearly be racist, sexist, homophobic, transphobic or Islamophobic, all of which are punishable by social death enforced by the permanence of the internet.  However, nothing is too bad for ‘white men’.  They can be discriminated against with no comeback.  For The Guardian, white men are The Enemy.  It is strange in this context that there are no similarly strident complaints about the ‘White Men’ running the Labour Party.  Perhaps that does not count in the self-styled ‘party of the NHS’.

The Guardian’s article is about a report looking at the composition of the people in charge of the NHS that came to this highly specific conclusion.  But does it actually matter?  If people are not selected for responsible positions in the NHS based only on their ability to do the job, then patients will die unnecessarily. If identity is a consideration that rates higher in the candidate selection process then there is a risk that it will also rate in the accountability process as well.  Criticising a failing professional could be muted, delayed or ignored if the criticism runs the risk of being regarded as prejudiced against an identity.  This means more people will die before their time.  And more people will continue to die.  The organised diversity rape in Rotherham that went on for the entire life of the last Labour government is an example of what happens when identity intervenes in the actions of supposedly competent professionals.  The fact of sixteen hundred young rape victims in one small town cannot be ignored.

The NHS is about saving and improving lives, not about social engineering.  The identity of the person whose hand is on the scalpel should not be an issue, still less the person that manages the scalpel-wielder’s schedule and activity.   Life-threatening conditions care not for the race, colour, creed or any other attributes of the team of people charged with its treatment and cure other than ability.  How many lives will actually be saved in the NHS if these clearly evil ‘white men’ are purged from their positions of power?

The Guardian should be called out for their clearly racist and sexist bigotry before people start dying unnecessarily.