NewsPaperthe art of publishing
HomeNewsPaul T Horgan: Trump can do a Reagan and confound the Left’s...
13

Paul T Horgan: Trump can do a Reagan and confound the Left’s propaganda 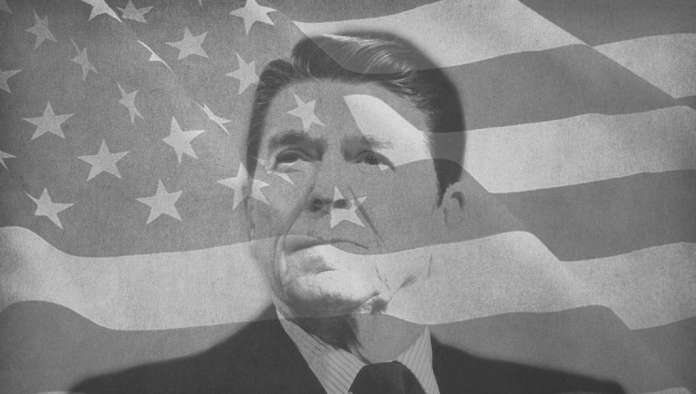 The grip that the Left has over mass media is almost total. But it is being usurped by the free market as content delivery migrates online. Right-wing thought is able to proliferate outside this grip of the ideologically-committed TV producer or newspaper editor – all thanks to the internet.

The Left’s domination of traditional mass content explains why broadcast and print media portray the ascension of Donald Trump to the Presidency as an event akin to an asteroid strike in Lower Manhattan. At the time of writing, the forty-fifth President has yet to take office. However, if the BBC and The Guardian are to be believed, we are in the middle of a global disaster.

T’was ever thus. This opprobrium against a Republican President who, at the time of writing, has not even entered office is not unique. Anyone past their fifth decade of life should be experiencing a sense of déjà vu.

The election of Ronald Reagan as fortieth President thirty-six years ago was greeted in an almost identical fashion. Despite Reagan being an experienced politician, having served as Governor of California during those periods when the apparently immortal Jerry Brown was not in charge, commentators focused on his career as a cowboy actor and also his advancing years. The absence of multichannel digital television, a rolling news cycle and the internet were the only factors that limited the depth, but not the intensity, of unreasoned opposition and mindless ridicule. Public derision of the free and open democratic choice of the American people was mainstream, as evidenced by the BBC’s Not The Nine O’Clock News‘ skits at the time, lampooning presidential news conferences and bemoaning Reagan being elected in the first place.

The mass media-stimulated climate of hate boosted the career of left-wing politicians like Jeremy Corbyn, who built their support on being resolutely pro-terrorist, pro-Soviet, anti-American and anti-capitalist. Labour is now run by these 1980s throwbacks and their indoctrinated disciples.

There are other parallels. The USSR was flexing its muscles in one of its client states to the South of its borders, sending troops and bombers into Afghanistan during the presidency of Reagan’s Democrat predecessor, a man who was widely seen as a nice guy unsuited to the global challenges facing him. The Soviets were also ramping up their military presence in Europe with increased threats against NATO countries. Meanwhile the USSR’s economy was quietly collapsing. There was also a global economic crisis that had been running for years.

In Britain, a woman became Conservative Prime Minister and she started to change the direction and focus of the British economy, as well as its relations with Europe. Labour was ideologically split and the hard Left took over. There were a series of strikes in the UK that appeared superficially about manning levels, but were really politically-motivated.

The anti-American, anti-Reagan culture pervaded the mass media across Europe and elsewhere for about five years, until the USSR had to get rid of an increasingly enfeebled gerontocracy that was rapidly dying off. Three successive dictators passed away from old age in four years as the ageing ruling clique feared handing power on to a younger generation that had never rubbed shoulders with Stalin. Once Gorbachev was in charge, the game was up. The Communists had bankrupted the USSR while deceiving themselves and the world that the Soviet Union was anything remotely as powerful as the USA and was also a legitimate global counterbalance to capitalism. The Marxist-Leninist state spent itself to oblivion trying to match or exceed America’s military power, ruining its economy in the process. Its people lost their fear of an openly incompetent government, its pickled ideology, and the instruments of repression it used to keep power. Once the fear was gone, Communism had to collapse. Peace broke out because the USSR had lost the Cold War.

Reagan, demonised for years by the Left as a warmonger, was the world’s greatest peacemaker.

The Left had to shut up for a decade until a terrorist outrage that killed thousands of innocents gave new impetus for their blind anti-Americanism by providing them an opportunity to make new alliances with evil.

Donald Trump is not Ronald Reagan. The 2010s are not exactly like the 1980s, despite numerous parallels, like a computer-fuelled technological revolution and a never-ending major war in the Middle East not involving Israel. However, the popular media climate is the same and is just a standard knee-jerk reflex by Left-dominated outlets dismayed that their candidate for office was defeated in a free, fair and open election.

Do not expect much rational commentary in traditional media for the next five years or so. All that is being broadcast, printed and posted at present is the unpitiable lament of extremely sore losers feeling disenfranchised by reality.