NewsPaperthe art of publishing
HomeNewsPaul T Horgan: Trump’s opponents turn to the courts at their peril
7

Paul T Horgan: Trump’s opponents turn to the courts at their peril 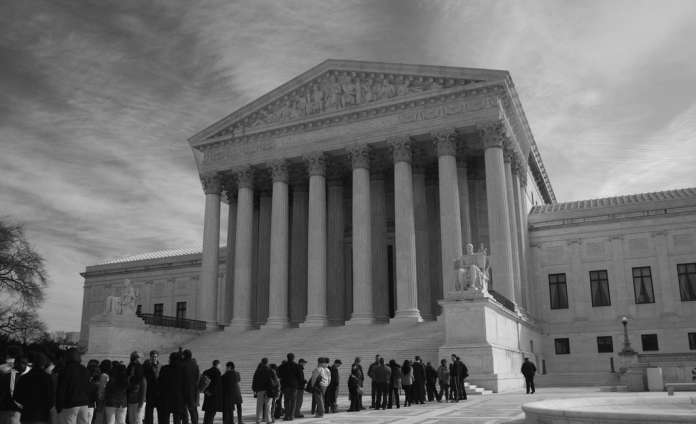 We folk in the UK have a bit of a problem when it comes to looking at the twists and turns of Trump’s temporary travel ban directive. It is that few of us are familiar with the complexities of American governance. Most people in the UK have a hard time working out the complexities of governance here. This is not helped when the whipping system used by the major parties in Parliament seems to now be optional in the Labour Party.

Take for instance the use of the Presidential Directive. This is a decree associated with national security. There are also Executive Orders. Both of these are made by the President without any scrutiny by the legislature, although they may be challenged in the courts. Perhaps the closest we have here to these are exercises of the Royal Prerogative or Orders in Council. Or perhaps not. Someone send for Professor Vernon Bogdanor.

There is one Executive Order that is exercising the liberati at present, and that is President Trump making good on an election pledge to temporarily limit travel from some mainly-Muslim countries. Demonstrations have taken place. The order has been challenged in the courts. This is despite the fact that Trump actually has the legal right to prevent entry under 8 U.S. Code § 1182 (f) that states:

The law notwithstanding, Trump still has a fight on his hands. His Executive Order has been repeatedly struck down in Federal Courts. The current composition of the Supreme Court is a tie between conservatives and liberals. There is an unfilled vacancy, which is in the gift of the President, subject to congressional ratification. If there is a tie in the Supreme Court over the constitutionality of the ban, then the decision of the lower court prevails. So it appears that Trump will be prevented by the courts from fulfilling a version of the promise he made to the electorate. Incidentally, Trump’s Executive Order has been found to be popular in opinion polls conducted in the USA and Europe. However, courts are not concerned with popularity, just the law.

There are three possible outcomes that should be considered. Of the three Trump comes out well in two of them when he is thwarted.

In the first, the order is struck down. There is an atrocity. One or more of the perpetrators hail from one of the countries named in the travel ban. Trump is vindicated. There is less, if any, opposition to a new ban. The protesters and the judges are seen to have blood on their hands.

In the second, the order is still struck down. There are no atrocities, or if there are, they do not involve any person from any of the named countries. Trump is still vindicated. His desire for an order can be interpreted as deterring nationals from the named countries from committing an atrocity on US soil lest they play into Trump’s hands by proving his point for him. Trump has successfully shut off terrorists from from their major sources just by signing a piece of paper, even if it has not been implemented.

In the third, the order goes through. It has no effect. There is an atrocity on US soil, committed all or in part by people from countries subject to the travel ban. Trump’s policy has failed to protect American citizens.

There is also a fourth where the ban is in force and there are no atrocities. This is Trump getting the outcome he wants. But I should like to focus on the first three.

Of the first three, there is only one case where Trump looks bad and this is where the protesters do not get their way. Even if Trump loses the court cases, he can come out of this looking good and his opponents will look from bad to terrible. Trump is trying to save lives, he can say, and the terrorists have either been deterred by his words alone or encouraged by those of his political opponents.

Trump’s opponents by their protesting are preventing a President they hate from getting enough rope to hang himself in two out of the three cases. This is political Monty Hall Problem, where a game show host has an expensive car hidden behind one of three doors. The contestant chooses a door. The host opens a different door that shows a goat behind it. Should the contestant stick with the door they first chose or choose the remaining closed door? The answer is counter-intuitive. It is not a fifty-fifty choice.

Trump’s opponents are sticking with the first door, which is the losing option. They are refusing to allow Trump to fail by using the courts to prevent him implementing one of his key pledges. They are deliberately stacking the odds against themselves by their instant protests. Their best option is to let the lawfully-elected President govern the country possibly to prove them right. At present they are using ideology to play with the lives of their fellow citizens and risk getting the political equivalent of a goat for their troubles.