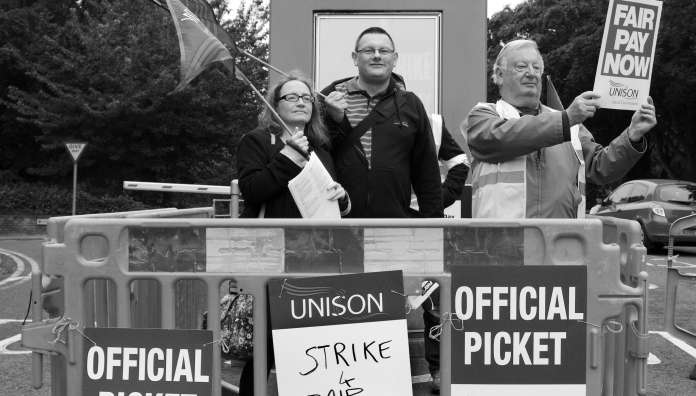 Readers of this blog who are also parents may have been recently inconvenienced by having to look after their children due to a walkout by members of the National Union of Teachers. They will have been made aware that this industrial action, like all strikes, was as a result of a ballot by union members. What is also clear is that the proportion of union members eligible to vote in a strike ballot that actually supported this strike action was only 22 per cent. For some reason more union members abstained from voting than actually voted to strike. The turnout was a mere 27 per cent.

The unions, quite naturally, oppose such a measure as it clearly takes away power from the activists and redistributes it to the moderate majority. In their defence they argue that the strike ballot test is more severe than that required by politicians to get elected.

This is actually a dangerous and silly argument. It equates and thus elevates union strike ballots to the level of national and local elections. It tries to increase the stature of union leaders back to the levels they enjoyed in the era of Gormley, Scanlon and Jones.

Worse still, this argument appears to have the sympathy of some Tory backbenchers. Mark Garnier, known for his forensic destruction of bankers’ defence of their failures as a member of the Treasury Select Committee, stated on the BBC during the most recent day of stoppages by state sector workers that politicians pushing for such thresholds would be in ‘slightly dodgy ground’ criticising the overall numbers of union members backing strike action, with a turnout of just 65 per cent at the last general election, 30 per cent in district council elections and just 15 per cent in police and crime commissioner elections.

Strike ballots of union members cannot and should not be equated to national and local elections for many reasons. The unique common feature is that a vote is cast secretly. That alone does not make the unions’ argument.  It is typical muddled socialist thinking to believe that it does. Once again socialists try to portray equality where none actually exists.

What is surprising and disappointing is that the unions’ case appears to have been accepted uncritically by the broadcast media, politicians and also Conservative commentators. There appears to have been no disagreement by anyone with the unions’ case for this undeserved equal treatment. This is despite the fact that there are several obvious differences between strike ballots and elections. Here are just a few:

As far as I can see, no-one in the media or the Conservative Party is making these points clearly. The argument of the Left is presently unchallenged. While some may not bother to refute the unions’ case because it is clear that it has no merit, the lack of such a challenge only gives credence to the unions’ bogus position.

The unions actually have no case and this should be pointed out every time they try to make it. If they want to cause disruption and inconvenience to the people of this country, the unions must have the mandate of the explicit votes of the majority of their members to do so. At present this is not happening. Once again socialists have fudged imposed democracy to serve their narrow political ends. The Tories plan to correct this misbehaviour in the next parliament.

Share
Facebook
Twitter
WhatsApp
Email
Previous articleChris Lenon: So much for local democracy. Crossrail 2 “consultation” is a charade
Next articleJill Kirby: Volunteers are altruistic. Pay them and they become cheap labour