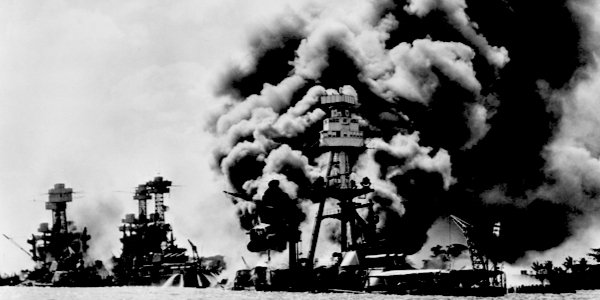 ON December 7, 1941 – ‘a date which will live in infamy’ as US President Franklin Delano Roosevelt called it – the Japanese attacked the American naval base at Pearl Harbor in Hawaii.

The surprise strike by more than 350 carrier-borne bombers, fighters and torpedo planes on the home of the Pacific Fleet came shortly after dawn on that Sunday 80 years ago today. It left 2,400 Americans dead, and four battleships were among the many vessels sunk.

Next day, Roosevelt asked Congress to declare war on Japan, which had also invaded British-ruled Malaya on December 7 as part of its grand strategy to conquer South East Asia. Britain in turn declared war. You can see and hear FDR’s momentous speech here.

The Pearl Harbor attack sent shockwaves across America and the world. However, perhaps its most significant repercussion came four days later when Germany chose to declare war on the US. It was a fatal move by Adolf Hitler, virtually ensuring the Third Reich was doomed to lose the Second World War, no matter how long it took.

Many historians see it as the Nazi dictator’s biggest blunder, because there was no need for Germany to become involved with fighting the US. It simply seems to have been the Fuhrer’s unhinged temperament that led him to make the decision.

It all pivoted on the Tripartite Pact mutual defence agreement, which Germany, Italy and Japan had signed on September 27, 1940. It specified that each of the trio would come to the aid of the others if they were attacked.

However, Japan knew that because it would be the aggressor with its Pearl Harbor operation, it would technically negate Germany’s commitment to becoming involved.

The warlords in Tokyo did not tell Hitler of their audacious plan to sink the US fleet. But on November 5, 1941, they sought a formal agreement from Germany that in the event of war between the US and Japan, Hitler would offer them military support and would not conclude a separate peace.

Germany’s Foreign Minister, Joachim von Ribbentrop, assured Tokyo that the Reich would join the war immediately and there would be no separate armistice, saying: ‘The Fuhrer is determined on that point.’

Crucially, the new deal was not signed when the Japanese attacked on December 7. So Hitler had a legitimate get-out for not backing Japan if he so chose. However, on December 11, shortly before he gave a speech to the Reichstag announcing the declaration of war on the US, the revised agreement was signed.

Hitler’s decision was a Godsend for Roosevelt and Britain’s Prime Minister, Winston Churchill. Although the US had officially been neutral since the start of the war in September 1939, it had approved the Lend-Lease Act, supplying Britain with armaments. US troops had also taken over control of Iceland, to free British forces who had occupied the strategic island in 1940 to prevent it being seized by the Germans. In the Atlantic, the US Navy was regularly clashing with German U-boats.

In March 1941, US military planners had agreed with the British that, if America entered the war, defeating Hitler would be the priority. However, the US public were against a conflict with Germany and it might have been impossible for Roosevelt to change their minds without an overwhelming reason.  Now, there could be no prevarication.

Hitler’s decision brought Britain the American lifeline Churchill had long been seeking. When news of the Pearl Harbor attack reached him at Chequers soon after it happened, he phoned Roosevelt.

The President confirmed the air strike, saying: ‘We are all in the same boat now.’ Churchill was saddened by the US losses, but elated by the consequences, knowing that Germany would now almost certainly go to war against the US.

It meant that Britain’s valiant struggle against Hitler would be immeasurably strengthened with the aid of America’s manpower and industrial might, and the fighting forces of the resurgent Soviet Union, which in late 1941 had fought Germany’s invasion armies to a standstill with the onset of winter.

Churchill knew that although there was still a long, hard road ahead for the Allies, December 7, 1941 was a turning point in the war.

‘No American will think it wrong of me if I proclaim that to have the United States at our side was to me the greatest joy,’ he wrote in his memoirs. ‘The United States was in the war, up to the neck and in to the death. So we had won after all. Being saturated and satiated with emotion and sensation, I went to bed and slept the sleep of the saved and thankful.’