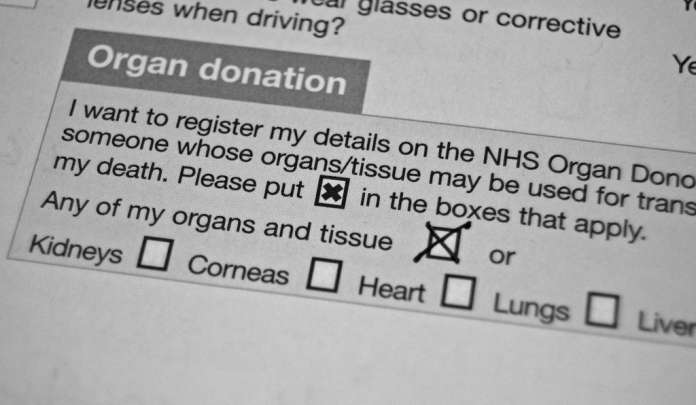 The debate about changing the law on organ donation is one of a number of controversial issues where I believe that we are increasingly seeing see the triumph of ideology over evidence.

A campaign to introduce ‘presumed consent’ to organ donation on death has been gaining momentum for some time and now similar legislation to that passed in Wales in 2015 is set to be debated, and perhaps passed, in England and Scotland next year.  It has been on the agenda in Northern Ireland too.

To give some background: everyone generally agrees that the number of people waiting for organ transplants is painfully high and more must be done to increase the pool of potential organ donors. Public campaigns to encourage people sign up to the organ donor register have been very successful, as have changes to the infrastructure of donation, but nonetheless hundreds of patients are still waiting, desperate for organs for transplants.

Can more be done to increase organ donor numbers?

Passing legislation to presume that every person automatically consents to donating their organs on death, unless they specifically choose not to be a donor by opting out, seems like an attractive and obvious way to increase numbers of organ donors. This is what Wales passed in 2015.

Should England and Scotland also put everyone automatically on an organ donor register, unless they specifically opt-out of it, as in Wales now? Or do we continue simply to encourage people to sign up to be an organ donor on death, and not presume they have automatically consented to do so?

Is there evidence to show which is the most effective way of increasing organ donation?

To clarify, this blog is not about whether or not we want organ donations to increase. I am taking it as read that we do. The issue here is how best to achieve it.

That requires a look at the hard evidence.

The ‘presumed consent’ system was introduced in Wales in December 2015 and the results from the first full year are now available (April 2016-April 2017). Figures show a small decrease in deceased donors since the same period the previous year. Although variability is to be expected, they certainly do not show an obvious increase in donations.

Instead of achieving the additional 45 organs that the Welsh Government confidently predicted per year, 2016-2017 saw a drop in the availability of organs for donation, with three fewer donors and 33 fewer organs donated than in the previous year.

However, over the same period there was an increase of people on the organ donor register (ODR) from 1.05 million to 1.1 million, which is an encouraging increase (66,051 people to be precise).

It is worth at this stage delving a little deeper into these statistics and the legal changes because what this means is that those 175,000 people have now completely withdrawn themselves from donation, so their families can no longer be approached in relation to donation.

Under the previous system in Wales (and the current English and Scottish systems), before consent was automatically presumed a family could still donate the organs of a deceased person even if the deceased had not signed up to the ODR, or the opt-out register. So families or living representatives of the deceased could decide to donate their loved one’s organs in the absence of express direction to do otherwise. However, under the new presumed consent system, those donations cannot happen. For those 175,000 people, such conversations cannot even begin. That means that one in 20 Welsh adults has opted out after the new process, compared with none before.

A 2017 BMJ article warns about this exact phenomenon happening with presumed consent and the potential harm: ‘…some or many of those opting out may have been willing to donate freely but not under uncertain legislation. It means that the number of potential donors has shrunk by 5 per cent. It may mean unease with doctors, donation, or death. Trust may decrease as a result.’

A further interesting comparison is that the number of people who have removed themselves from being organ donors in Wales (175,000) is far greater than across the rest of the UK in 2016/7. In England the figure was 27,559, in Scotland 1,834 and in Northern Ireland 204 – all places where consent is not presumed.

If we want to look at other countries in search for evidence, Spain is usually held up as a model to follow – the high achiever of the organ donating world – with apparent presumed consent legislation and high donation rates. However, as this 2017 BMJ article comments, no increase in donations was noted until ten years after an opt-out law was passed, when well-staffed transplant coordinating teams were instigated. The threefold increase in organ donation in Spain occurred without changing the law and, instead, because the system was changed.  Moreover, the system there is quite different to Wales.

The Director of the Spanish National Transplant Organisation, Dr Rafael Matesanz, made it quite clear when giving evidence to the House of Lords in 2008 that the key to success in Spain was due to organisational changes, not legislation, for example, having a centralised office for coordination, regional organ donation coordinators and trained coordinators in each hospital to talk to families:

Fabre, Murphy and Matesanz state in the BMJ that ‘Spain in fact demonstrates it is possible to have the highest rates of organ donation without recourse to presumed consent’

As for other countries, donation rates in countries with presumed consent laws do not actually differ from countries requiring explicit (opt-in) consent. Indeed, some countries operating presumed consent systems have lower rates of organ donation (including Sweden, Greece and Bulgaria).

In a recent Parliamentary debate I was struck by the irony of an argument presented in favour of introducing presumed consent. While suggesting that we can ignore the evidence of the Welsh data (thus implicitly acknowledging that it does not help the presumed consent case!) Paul Flynn MP stated that: ‘It is not important that the Welsh Government might not have had entirely accurate evidence; evidence rarely is entirely reliable, and there may have been misunderstandings.’ But then in his immediate next statement he says, with great surety and specificity, that: ‘At least 40 lives were saved—at least 40 people are alive today who would not have been had the presumed consent Bill not passed.’

Aside from the irony of claiming that evidence is not important, and that the evidence is not accurate or reliable but then confidently stating exactly how many lives were saved by presumed consent, I am not sure how his figure of 40 lives ‘saved’ is reached. NHS data shows that the total number of organ transplants in 2017 was lower than in 2012 (187, compared to 210 transplants), and the number also fell between 2015 and 2017 (from 214 to 187). Perhaps he reached his figure of 45 lives from the prediction by the Welsh Government back in 2012 that ‘…around 45 more organs could become available to the UK pool for transplantation.’

I could bring many other issues into this argument (such as the debate about ethics and consent, or ownership of dead bodies or other ways of improving donation rates) but the primary point I want to make here is that politicians and media campaigners who are truly interested in increasing organ donation, should look at the evidence, and produce evidence-based policies and changes. Those who want to take an ideological and not evidence-based route should be honest if that is what they are doing, and they should then prepare to see more people opt out of organ donation.

It depends whether evidence or ideology is more important.