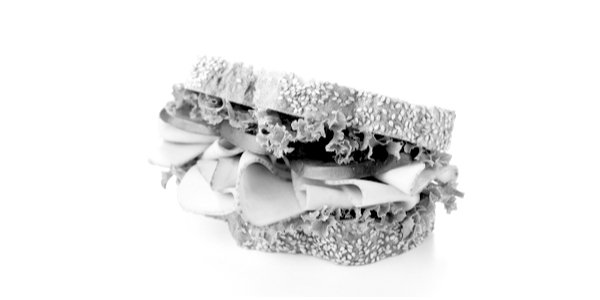 ‘YES, what is it, Inspector Kroon?’

– ‘There’s been a big bust at the docks, Commissioner Van der Valk. A ferry just got in from Harwich and a British lorry has been stopped. It looks dodgy.’

–  ‘Bloody hell, boss … a packet of ham and cheese sandwiches. With mustard!’

‘Yes, definitely. A street value of, let’s see … could be five euros a packet.’

– ‘There’s lots more sandwiches here in the back of the lorry, boss. Look … chicken and avocado, tuna and sweetcorn, cheese and pickle, BLT, beef and onion, turkey and stuffing.’

‘What does the British driver say?’

–  ‘He says they’re all for his personal use. He’s driving all the way to Italy and he can’t stand what he calls “that foreign muck”.’

‘A likely story. Book him, Kroon!’

‘You know, Kroon my boy, this is serious stuff. If this lot got on to the streets, the whole country could become addicted. I mean, who’d want to eat Dutch stuff like slimy raw herring with gherkins and onions, or deep-fried skinless pork sausage, when they could have snacks like this?

‘Get in touch with Chief Commissioner Samson back at headquarters and tell him I want all 20 of my squad sent down here right away.’

–  ‘Okay, boss. Are we going to deploy for a shakedown of the whole terminal?’

‘No, Kroon, it’s lunchtime. All these delicious British sandwiches aren’t going to eat themselves, are they?’