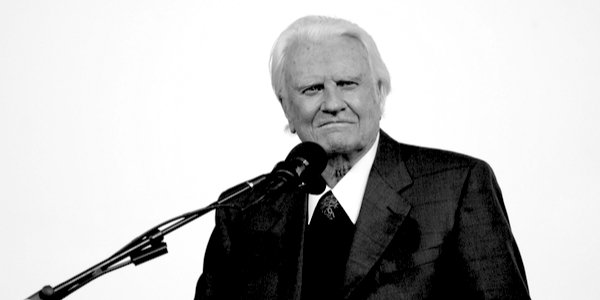 Three weeks later the lanky 31-year-old, tanned and topped by a wavy blond mop, looking like a vaudeville performer, entered the Oval Office. Graham told Truman about his evangelistic meetings in Los Angeles and Boston and affirmed his support for the President’s response to the Korean crisis.

‘What I really wanted to talk to him about was faith,’ Billy Graham writes in his autobiography. As his 20-minute slot was running out, Graham asked Truman about his religious background. Truman said he tried to live by the Sermon on the Mount and the Golden Rule. ‘It takes more than that, Mr President. It’s faith in Christ and His death on the Cross that you need.’

In a single sentence, refined to the point of crystal-clear clarity, God’s salesman had pushed his best and only product to the most powerful man in the world. ‘I am selling the greatest product in the world; why shouldn’t it be promoted as well as soap?’ Graham told TIME in 1954. Graham would be selling his ‘soap’ to every president after Truman. Only his soap could cleanse humanity of its principal problem, sin.

You can sum up Graham’s message in two words: sin and salvation. Graham began every sermon by hammering home the fact of sin – what the journalist Malcolm Muggeridge called ‘the most empirically verifiable reality but at the same time the most intellectually resisted fact’. Sin separates us from God.

No matter how much Rousseau and his successors denied the reality of sin, no matter how fiercely Marx and his followers transferred sin from individuals to structures, Graham called sin ‘a disease of the human heart’.

Salvation was possible only when a person was deeply convicted of sin and saw himself in desperate need of salvation. The solution for sin was the blood of Christ shed on the cross.

Christ’s death on the cross for our sins was the core of Graham’s gospel. Scholars refer to this core as the kerygma – the essential apostolic proclamation of the Christian faith. This is distinct from didache, another Greek term meaning fuller teaching and moral instruction.

Graham, the world’s second-greatest evangelist, was, in essence, modelling his preaching on that of the world’s greatest evangelist, St Paul. Writing to the Corinthians, Paul defines this kerygma with unmistakable clarity: ‘For I delivered to you as of first importance what I also received: that Christ died for our sins in accordance with the Scriptures, that he was buried, that he was raised on the third day in accordance with the Scriptures.’

In his lilting American accent, Graham’s refrain ‘the Bible says . . .’ rang with the authenticity of gospel preaching. It was clear because it was always ‘in accordance with the Scriptures’ and never confused with the ever-changing Zeitgeist – the spirit of the age.

‘At first I resisted his rebuke,’ writes Graham. ‘But that night I could not sleep, and before morning came I knew he was right. I made a commitment never to preach again without being sure that the Gospel was as complete and clear as possible, centering on Christ’s sacrificial death for our sins on the Cross and His resurrection from the dead for our salvation.’

Graham would explain why the cross was central. ‘When Christ hung, and bled, and died, it was God saying to the world, “I love you”.’ Billy Graham preached what Thomas Cranmer sonorously summed up in the Book of Common Prayer as a ‘full, perfect, and sufficient sacrifice, oblation, and satisfaction, for the sins of the whole world’. Cranmer’s clarity was unmistakably precise.

But clarity, however commendable, was not an end in itself. It was a means to an end. That end was personal commitment to Christ. God’s salesman had to clinch the deal and close the sale. The invitation to make a personal act of repentance and receive Jesus was the high point of Graham’s evangelistic meetings.

Each individual was culpable for the crime of crucifying Christ, insisted Graham. ‘It was not the people or the Roman soldiers who put Jesus on the cross – it was your sins and my sins that made it necessary for him to volunteer his death.’ Hence, each individual had to surrender to Christ as Saviour and Lord.

The result was assurance. Graham’s preaching offered salvation and eternal life to the repentant sinner who surrendered to Christ. ‘At most, you will live a hundred years on earth, but you will spend forever in eternity,’ he said.

It was this message of hope for the world that Graham shared with world leaders and was delighted when they occasionally reciprocated. When he was invited to coffee with Konrad Adenauer, the German Chancellor asked, ‘Mr Graham, what is the most important thing in the world?’ Graham recounts, ‘Before I could answer, he had answered his own question. He said, “The resurrection of Jesus Christ. If Jesus Christ is alive, then there is hope for the world. If Jesus Christ is in the grave, then I don’t see the slightest glimmer of hope on the horizon.” Then he amazed me by saying that he believed that the resurrection of Christ was one of the best-attested facts of history,’ writes Graham.

This wasn’t the psychobabble of inner peace or mindfulness or feel-goodism or niceness or moralistic therapeutic deism or the pseudo-Marxist mantras of social justice and economic and gender equality and diversity and multiculturalism and pacifism and a world without borders. It wasn’t the saccharine ‘All you need is love’ goo of the Beatles. It was the clearly focused gospel of sin and salvation, cross and resurrection, new life and eternal life.

The Apostle of Clarity preached this good news to 84million people in 185 countries and to 215million people by satellite, resulting in more personal moral and spiritual revival than St Paul or Wesley could have imagined.

I’ve preached in dozens of churches. Tragically, many churchgoers have never heard the gospel preached with clarity (never mind those outside the church). Graham’s message to Truman remained as clear as the message he would also preach to Queen Elizabeth II.

If only church leaders would stop faffing around with fashionable fads and preach ‘what is of first importance’, we’d have revival in our churches and in the world. Billy Graham, 1918-2018. Well done, thou good and faithful servant! Rest in peace, rise in glory!