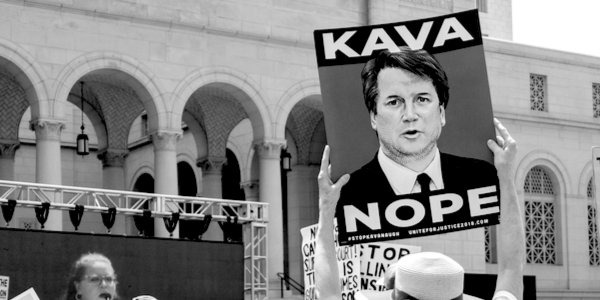 Once upon a time, when I had time to read fiction, I read quite a bit of Ian McEwan. Atonement is one of his best but I never actually finished it (I also love the film, mainly because you get to look at the beautiful people Keira Knightley and James McAvoy). There you are, enjoying the budding love affair between poor boy Robbie Turner and posh girl Cecilia but a rape allegation is made against Robbie and, boom, that is the end of his life: game over. I was so angry about Briony’s lie I couldn’t finish the book.

So, when I look at what is happening to Brett Kavanaugh, the US Supreme Court nominee, across the water it makes me not want to finish the book. In fact the whole thing makes me sick. At the eleventh hour of his confirmation hearing, an allegation has been made against Kavanaugh by a Californian professor, Christine Blasey Ford. She claims that Kavanaugh sexually assaulted her ‘in someone’s house’ 36 years ago when all of those alleged to have been involved were minors. Now we are to believe that this is enough to end Kavanaugh’s confirmation.

If this were a book, I would probably bin it. Sadly, this is real life and the Democrats will do anything, anything, to stop the confirmation from happening and if it means trashing a man’s life and reputation, then so be it.

First, the allegation is serious – namely that Kavanaugh held down Ford, groped her, attempted to remove her clothes and covered her mouth when she tried to call out. As I said, they were both minors at the time. However, secondly, and let’s be clear, there is no way this allegation can be seriously or fairly challenged either in a court of law (it is 36 years ago and I believe out of time under statute of limitations) or in the Senate politically.

The Democrats have set up a checkmate scenario here: any challenge by the Republicans against the testimony of an event that happened 36 years ago will be seen as bullying and harassing victims of sexual assault. In the #MeToo era this is toxic. As CNN gleefully pointed out: ‘If Republican senators attempt to impugn her character, they will disgrace themselves in the eyes of the American people.’ Checkmate.

In sum, Kavanaugh is seriously limited in his defence. In fact many on the Left are saying that, as it will be men asking questions of the accuser, this disqualifies them straight off. So if the Judiciary committee don’t call Ford, they are not taking the allegation seriously. If they do call Ford, they are disqualified from asking her any questions by the mere fact of being men. Checkmate.

Democrat Senator Dianne Feinstein, the ranking Democrat on the Judiciary committee, could have brought this to the attention of the committee and FBI weeks ago. Instead she kept quiet, knowing it would leak eventually. And so the media circus continues and the show trial begins. Where were you, Brett Kavanaugh, 36 years ago, at a time we can’t specify, on a day we can’t specify, in a place we can’t specify? If this sounds Kafkaesque, it’s because it is.

Perhaps you don’t follow US politics as closely as I do and you don’t care who is on the Supreme Court. But you should care about the presumption of innocence, you should care about due process and you should care about basic justice. And don’t bother pointing out that this is not a criminal trial. I know that. I was a criminal defence barrister in a previous life. But in many ways this is worse: Kavanaugh is fighting for his reputation, his good name, and his career. He is a married man with two girls entering their teens and he is being accused of a serious sexual assault against which he cannot properly defend himself other than flat-out denials which he has issued, twice. This is a despicable move by the Democrats.

If Kavanaugh is not confirmed, this will cement the presumption of guilt in civil life once an allegation of sexual abuse arises in all cases, no matter how flimsy.

In Atonement, Robbie Turner was thrown to the wolves because he was the poor kid in privileged circles. Today, it is the privileged white man who is treated with suspicion. No need for details, no need for evidence, ‘they are all the same’.

Did you know it was him, or you saw it was him? I know it was him, said Briony, ‘I saw him with my own eyes.’ And you know what – Briony believed her own lie because Robbie Turner fitted in with all her prejudices. Kavanaugh fits in with all the prejudices held by the Democrats. He represents everything that is wrong with the world today: conservative, white, male and privileged. We are witnessing a great injustice and it isn’t a work of fiction.