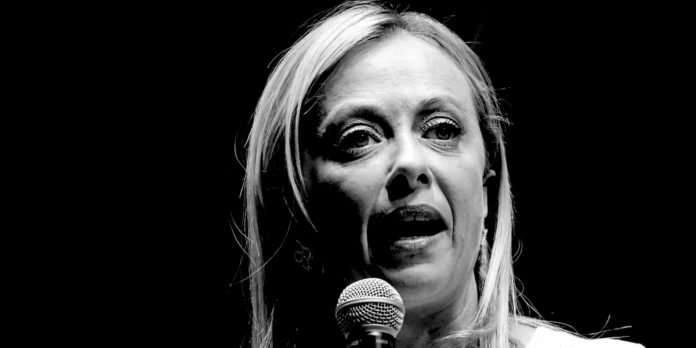 THE Left is worried so be prepared to hear a great deal more about the ‘far-Right’, ‘hard-Right’, ‘Right-wing extremist’ Giorgia Meloni. Press mentions of Italy’s rising centre-Right star almost always include a reference to Mussolini or assertion of her Brothers of Italy party’s ‘neo-fascist origins’. She is characterised as a figurehead who ‘threatens to send Italy down a dangerous authoritarian path’. The Guardian warns, ‘Success of far-Right Brothers of Italy raises fears of fascist revival.’ It is clear that the prospect of her party gaining ground in Italy’s next general election is sending shock waves through the mainstream media.

Named after the opening words of Italy’s national anthem, the Brothers of Italy (Fratelli d’Italia) is a national conservative party which is growing in prominence and is being touted as having a good chance of leading the government after the election, which must take place next year. Meloni also chairs the European Conservatives and Reformists Party, an alliance of centre-Right parties in the EU.

In recent local elections the Brothers of Italy took 10.3 per cent of votes in nearly 1,000 local contests, significantly more than the 6.7 per cent won by the rival League party led by Matteo Salvini. This reverses the result of the 2019 European elections in which Salvini took 34 per cent and Meloni just 6 per cent.

Meloni is now in the driving seat in a Right-wing coalition alongside Salvini and former prime minister Silvio Berlusconi. Polls make their Right-wing alliance favourite to win the 2023 election and if the Brothers of Italy takes more votes than the League, Salvini has agreed she will become prime minister.

Meloni is not the type of conservative to whom we have grown accustomed. She is a national conservative and this frightens the Euro-elites because her aim is to put conservatism back into its traditional sphere of national identity. She sees the nation state as the sole means of combating globalism and protecting freedom. ‘The Nation is the place where our values are safeguarded and transmitted.’

Globalism takes power from the people and transfers it to supra-national organisations run by and in the interests of the elites. Globalists thus see national identity as a hindrance to their totalising ambitions which has to be overcome. We see this in the continuing media and political stress on diversity with its consequent fracturing of communities through identity politics pitting one single identity group against another, each fighting for its own rights and caring little for the good of all. National identity is being continuously eroded throughout Europe.

National conservatism is the opposite of what we have fed to us by the mainstream parties of Right as well as Left. Most centre-Right parties favour liberal conservatism with free-market economic policies, deregulation and controlled spending the overriding priorities. Most European parties nominally of the Right, such as the UK’s Conservatives, are run by economically liberal conservative elites who have deliberately marginalised the social and cultural issues which concern their electorate. We are used to continual promises to cut immigration to ‘the tens of thousands’ yet it keeps growing, as this suits the economic interests of the establishment by keeping wages low and weakening opposition to globalist aims. What the people want is sidelined or ignored.

Meloni has gained support by demanding that the EU leaves the global compact on migration. Whilst welcoming immigrants who would be able and willing to integrate into a European country with a Christian heritage, she is staunchly opposed to taking in any more migrants and refugees who cross the Mediterranean from North Africa. The party advocates a naval blockade of North Africa to stop illegal immigration.

National conservatism emphasises patriotism, nationalism, cultural conservatism and monoculturalism. Meloni sees national conservatism as the only real democracy because only by defending the nation state do we defend the political sovereignty of the people who belong to that state. Nations composed of people sharing the same historical and cultural memory are the bedrock of democracy.

Meloni sees the protection of ‘religious and moral values, the noblest purpose of all political action’. Democracy without cultural values degenerates into a free-for-all plunge into decadence, something we can see around us in ‘Pride Month’ where a Pride march can be little more than a celebration of perversity.

Meloni is dedicated to the freedom of the individual. Although she had a Covid vaccination herself, she was vehemently opposed to the Green Pass scheme by which all Italians over the age of 12 were banned from most enclosed public spaces and many open-air ones as well, unless they could prove they had received at least one jab.

‘The idea of having to use this Green Pass to be able to participate in communal life is chilling, and the ultimate step towards the realisation of an Orwellian society,’ she tweeted when Mario Draghi, Italy’s technocratic non-elected Prime Minister, announced the policy. ‘It is an unconstitutional act of madness that Fratelli d’Italia rejects outright. For us individual liberty is sacred and inviolable.’

National conservatives are painted as obtuse nationalists, thinking only of the good of the home nation. Modern national conservatism defends the identities of nations as the basis for new forms of co-operation. It does not want to impose its own interests at the expense of other nation-states. What it actually wants is co-operation between independent nation-states once again able to defend the freedom, identity and sovereignty of their peoples. Brothers of Italy defends Viktor Orban’s Hungary and Kaczynski’s Poland, nations under attack from the European progressive mainstream. The aim is to build a true, real Europe of peoples and identities, not an abstract Europe run by nameless bureaucrats.

Meloni sees Europe facing challenges today that will shape the future and the very survival of our shared civilisation, challenges which we have to face together. No wonder the established elites vilify her.