Put down the toaster and come out with your hands up 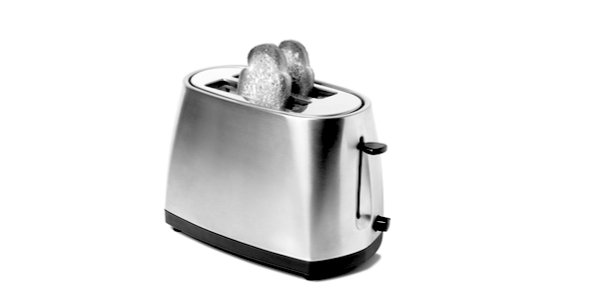 WHAT a comfort it is to know that highly paid scientists are beavering away at the frontiers of research to find new ways of scaring the living daylights out of us. And credulous journalists are only too happy to assist.

Such fun the Sunday Times and Times had on consecutive days, pointing out firstly the life-threatening danger of toast, secondly how a roast dinner turns your home into a death trap.

Just when you thought it was safe to char a couple of slices of Warburtons wholemeal for your Sunday breakfast, the message came that ‘toasting bread can expose people to more pollution than standing at a busy road junction’.

The worrying news came from lead researcher Marina Vance, from the University of Colorado Boulder. Having fitted a three-bedroom house with advanced sensors, she and her colleagues discovered that toasters send toxic particles into the air as soon as they are switched on.

The Sunday Times went on: ‘At last week’s annual meeting of the American Association for the Advancement of Science, held in Washington, she said: “When you make toast, the heating element starts warming up the debris and gunk in the toaster which includes oils”. (Note the use of the specialist term ‘gunk’).

‘In an accompanying video detailing early results of the research, Vance . . . added: “Add to that the bread itself — it’s going to emit a range of things. We found ethanol, a by-product of yeast. If there’s tiny pieces of bread touching the heating element you can see the smoke, maybe from crumbs at the bottom of the toaster — they will all make a lot of particles.’

She went on: ‘It led to what would be considered “very unhealthy” air pollution levels if compared to outdoor air quality standards.’

The newspaper quotes Jonathan Grigg, a professor who chairs a committee set up by the Royal College of Paediatrics and Child Health which is investigating indoor air pollution, saying: ‘This research could be a wake-up call to the risks posed by toasting and toasters.’

So precisely how dangerous are these ‘toxic particles’ careering around your kitchen? How many slices of toast does it take to kill you off? Of course, we are not told.

On to Monday’s Times, which had another go at the same research source under the headline: ‘Cooking a roast is as polluting as inner city traffic’.

However, don’t go vegan just yet. The article admits that ‘short exposures from cooking are not directly comparable to long-term exposure in a city’.

And the laugh-a-minute Ms Vance declares: ‘The joke we’ve been telling ourselves is to boil everything, avoid roasting – but it’s too delicious.’

What a wag. Bet that had the American Association for the Advancement of Science clutching their sides.

My favourite dose of boffin balderdash comes, however, from a paper published in the American Journal of Clinical Nutrition and reported in the Times of February 8.

Skip past the customary gibberish intro from Mr Tom Whipple and we find that scientists have broken new ground in research into the hangover. Their stunning conclusion is that the two best predictors of feeling like death in the morning are a) being drunk and b) puking.

Our thanks are due to Dr Kai Hensel, from University Hospital Wuppertal in Germany and the University of Cambridge, who was looking into whether ‘tactical drinking’ – consuming wine and beer in a certain order – affected the subsequent morning after. The answer: No it didn’t.

Dr Hensel goes on: ‘Of course people were really happy. There was some singing, some dancing. I had a megaphone to control the room. Then we had to tell them, “Now it is time to go to bed, no more drinks for you”. Then they weren’t happy.’

So that’s more illusions shattered. I always thought it was the pork scratchings and salted peanuts in the pub, or the doner kebab hoovered up on the way home, that did the damage. Turns out it was alcohol all along.

Wow, thanks for that, Herr Doktor. His final word is that the research participants had given him broadly positive feedback. ‘The vomiting rate was a little higher than I’d have thought. But they enjoyed it.’

As I always say, you can’t beat a good chunder to make your night complete.