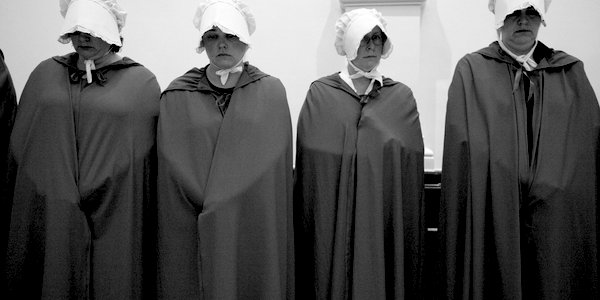 WANTED: Women who are not psycho killers, fewer rape scenes and less torture in our ‘entertainment industry’.

It is true that I watch very little TV, but I can’t opt out completely so I am vaguely aware of Killing Eve, Game of Thrones and of course The Handmaid’s Tale. It seems these days you can barely blink before some new ‘spunky’ female writer sketches another ‘strong, complex, psycho female character who likes killing people’ that we are all supposed to watch and admire and feel empowered about.

Melanie Phillips discussed this a while ago. On Killing Eve, she wrote: ‘We’re asked to admire her [psycho-killer Villanelle] in an ironic and blackly comic kind of way. So we are invited to stifle our own feelings of revulsion not just at the violence but at Villanelle’s chilling absence of moral sensibility, the thrill she gets from shedding blood, her enthusiasm for serial murder. We are invited to delight in her ingenuity and preternatural talent for killing; we become smiling voyeurs of psychopathic violence. And that’s said to be “empowering”?’

True to form, a Times reviewer, Carol Midgley, was delighted when Villanelle snapped the neck of a 12-year-old orphan boy in the latest episode. This apparently made it ‘as fresh as a new pair of knickers’.

And here I was thinking that maybe watching 12-year-old orphan boys getting their necks broken was not such great entertainment. I thought such a thing was demonic.

Then there is Game of Thrones, which my research tells me features murder galore and gore as well as a lot of rape, incest and the killing of pregnant women. Yet millions of people feast upon this stuff on both sides of the water. They just cannot get enough of the killing, the rape, the incest and sometimes all three in the same episode. Pass the popcorn, I’m on the edge of my seat!

Finally, then, we have the latest series of The Handmaid’s Tale, now well past the book of the same name. There is plenty of rape in this too (one scene saw a very heavily pregnant June being raped by the Commander) as well as lynching and the life of various babies repeatedly being put at risk of death. This handy piece of Leftist propaganda has the added benefit of keeping women in fear of a ‘dystopian future just around the corner’ and on the verge of a nervous breakdown so they’ll keep voting for the Lefties. That is the beauty of fear – it makes people easy to manipulate.

I don’t understand why people watch this stuff for entertainment. Is the news not bad enough? It lowers our sensitivity to stories that are genuinely horrific and all too real. I’m not saying watching Killing Eve will turn you into a psycho killer – but I am saying it is not good for your soul. I am saying it is demonic and contributes to the degrading of the citizenship.

There is enough real horror out there without viewing it for entertainment. There was Dylan Tiffin-Brown, who was two when he died of cardiac failure after his father assaulted him in December 2017, and Evelyn-Rose Muggleton, who was one when she died in hospital days after being battered by her mother’s partner in April 2018.

Was Peter Connelly not enough for you – tortured and killed by the mother’s boyfriend? In fact, barely a week goes by before another child is killed through neglect or murder.

There is very little entertainment in watching kids being killed and women being raped, even if it is ‘empowered’ women doing the killing. And if you are entertained by all of this, if you do think it is ‘as fresh as a new pair of knickers’, then maybe you should take a long hard look at yourself in the mirror.