WITH 12 candidates declared so far, possibly more by the time this is published, and even though not officially under way until next Monday, the ‘Conservative’ Party leadership contest already resembles not so much a Westminster fight as a Whitehall farce.

It’s obvious that most of the candidates aren’t serious leadership prospects, and some will inevitably withdraw. In fact, James Cleverly already has done. Several are clearly either trying to attract enough support for themselves to secure a promise of Cabinet or ministerial office from a genuine contender if they withdraw and switch their support to him/her, or to boost their own profile and lay down a marker for a future contest.

With the Party’s leadership election rules giving its MPs a series of one-by-one elimination ballots until the final two go forward to be voted on by the entire membership, the question of who’s supporting and being supported by whom assumes a crucial significance. Not all MPs disclose their preference, though, and some who do don’t necessarily do so truthfully – remember, this is allegedly the most devious, capricious electorate in the world – but the running spreadsheet being maintained and regularly updated by the Guido Fawkes website Tory Leadership MP Backers is probably the most accurate predictor.

So the Remainers know that, in a straight Leave-vs-Remain contest in the final run-off, the Leave candidate is virtually assured of victory: hence firstly the ‘Stop-Boris’ and ‘Stop-Raab’ campaigns, and secondly the drive to get either or both of Gove and Hunt into the final two.

To try reading the tea leaves against that background, let’s look at the declared candidates with the most endorsements as at 3pm on Tuesday afternoon, 4 June, when this article was filed, and focus on the top four. 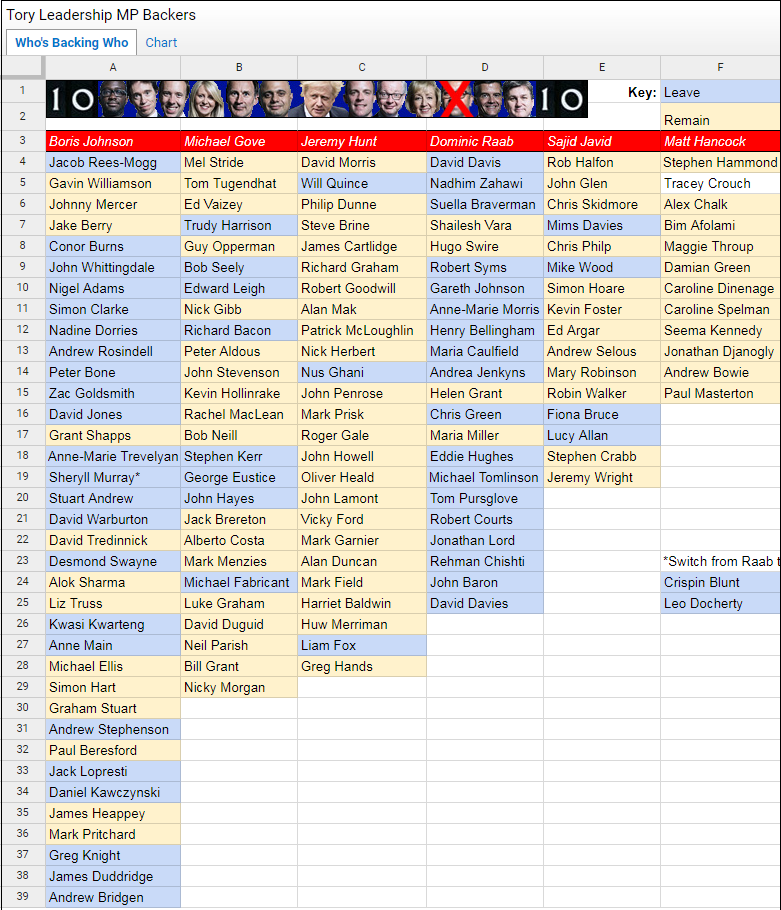 It’s immediately apparent that both Johnson and Raab are predominantly Leaver-supported, Raab more heavily so, while Gove and Hunt are clearly drawing their support mainly, almost overwhelmingly in the case of Hunt, from the Remain camp.

Can we now please now end, once and for all, the fiction that Gove is a Leaver? Apart from the origins of most of his support, the indicators in the other direction are powerful, and becoming more so. He’s remained steadfastly in May’s Cabinet despite the Chequers Deception, has still not repudiated her duplicitous vassal-statehood ‘Withdrawal’ Agreement, and indeed loyally voted for it no fewer than three times in the Commons, as his personal scorecard in the highly-recommended Statisticus Collegium database.

His ‘unity candidate to deliver Brexit’ appeal Michael Gove: Back me for Tory leader to beat Jeremy Corbyn and deliver Brexit can just as easily be read as a coded signal to the One-Nation, Brexit-in-name-only, closet-Remainers headed by Amber Rudd as a readiness to compromise with them. He duly received an endorsement from one of their number, Nicky Morgan. 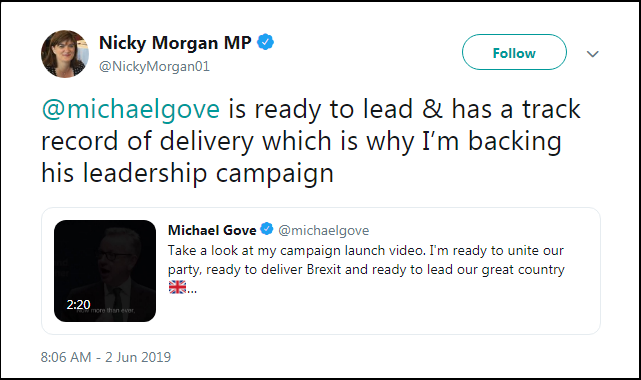 In the last couple of days he’s openly proposed delaying Brexit until 2020, Michael Gove tells Cabinet ministers he is prepared to delay Brexit until late 2020 in the process earning not only the immediate implied approval of anti No-Deal Amber Rudd, Amber Rudd warns Tory leadership candidates against backing no-deal Brexit but even an uncritical write-up from the scabrous Weekly Remoaner, otherwise known as The New European. Gove: Delay Brexit until 2020 to avoid no-deal.

To put it mildly, his professed support for Leave no longer looks even remotely convincing. No surprise, perhaps, that the Daily Telegraph’s Charles Moore has halved his personal assessment of Gove as a true Conservative from 8/10 to a mere 4/10. Who, in this swollen and ever-widening field, can truly claim to be a Tory? He surely cannot be trusted to deliver Brexit.

Hunt need not detain us unduly. Assumed for some time to be on opportunistic leadership manoeuvres, he recently tried to burnish his credentials as a Brexiteer by purporting to warn May against doing a deal with Labour to get her ‘Withdrawal’ Agreement through the Commons, Striking Brexit deal with Labour could alienate Tory MPs, Jeremy Hunt warns despite, like Gove, having voted for it three times himself.

But, again like Gove, Hunt sat on his hands and allowed May’s Cabinet to descend into its state of acquiescent chaos simply to maximise his own chances of becoming leader. Theresa May faces new coup after second referendum gamble backfires Since her resignation, his declared Brexit policy has been one of serial flip-flopping, epitomised by his warning that a No-Deal Brexit would be ‘political suicide’, followed by a declaration only three days later that No-Deal was better than no Brexit.

Hunt talks about ‘getting Brexit done’, but his interpretation of ‘getting Brexit done’ is obviously somehow to get May’s damaging ‘Withdrawal’ Agreement over the line in the Commons and then claim to have ‘delivered Brexit’, when it would in reality be nothing of the sort, but instead signing up to perpetual vassalage as a colony of Brussels. Rightly did Charles Moore give him a personal assessment of only 2/10, as an ‘all-purpose person of the bland 21st century who could fit just as easily into a Blair Cabinet or a LibDem one’. Hunt, basically, is Theresa May in a suit.

The odds must therefore surely be quite high on whoever ends up as the trailing candidate out of Gove and Hunt either voluntarily withdrawing and transferring his endorsements – or as many of them who are willing – to the other in return for a promise of a senior position in the other’s Cabinet, or doing so following elimination in the later stages of the MPs’ ballots. That looks to be the only way of sending a soft-Brexiteer or Brexiteer-in-name-only into the final membership poll.

To counter that, and get a committed Leaver or clean-Brexiteer into the final two, at some stage there will presumably also have to be some kind of pact or showdown between Boris and Raab. Ceteris paribus, logic would suggest Raab as the less-supported candidate of the two transferring his endorsements – with the same caveat as in the preceding paragraph, obviously – to Boris on the same basis. This is where it gets a little trickier.

Question marks must remain over just how robustly committed to a clean Brexit Boris would actually be. On the plus side, his endorsement by the more free-market inclined Liz Truss bodes well for seizing the deregulation and tax-cutting opportunities a clean Brexit would present: moreover, both that, and his pledge to deliver Brexit, ‘deal or no deal’, on 31 October.

But does that not raise the question of why he was apparently entertaining overtures from the latter in the first place?

Boris appears from his campaign video, effective though it is, to have adopted the Remainer narrative that people voted for Brexit mainly because they felt ‘left behind’ economically, rather than, as the most reliable post-Referendum polling showed, to re-exert political self-determination by retrieving their sovereignty and democracy from the unaccountable and unelected elites of Brussels.

Boris likes, above all, to be liked, and I fear the possibility that he will soften his declared Brexit stance, to maintain his internal popularity and ensure the ‘Conservative’ Party’s unity or even its survival, cannot be discounted. And we should not forget that he eventually buckled and decided to vote for May’s shameful ‘Withdrawal’ Agreement, despite agreeing with the criticism of it as, in effect, a treaty of perpetual vassalage.

Which brings us to Raab. He positioned himself earlier, and as a firmer, advocate of a No-Deal Brexit if necessary than did Boris, and is reported to be the potential Brexit negotiator whom Brussels fears far more than it does Boris – I’ve watched Dominic Raab negotiate with Brussels. It’s no wonder they’re so scared of him which has to be a plus. Neither should we forget that, during his brief post-Chequers sojourn as Brexit Secretary, before he resigned in protest at May’s final ‘Withdrawal’ Agreement, he did actually participate in negotiations, which Boris, who resigned straight after Chequers, never did.

Against that, though, he also decided to abandon his previous resistance and vote for May’s ‘Withdrawal’ Agreement before her fall from office in effect killed it off.

It’s possible that Raab’s lower public profile, along with his lower number of declared supporters, will work against him: yet it’s also arguable that he’s more ideologically committed to Brexit from first principles than Boris is, and so would be more prepared to risk personal unpopularity to deliver it, and that that will work in his favour. That, incidentally, seems to be the view of TCW readers, whose latest poll reversed Boris’s early lead.

Whatever, one thing seems incontestable. To capitalise on the Brexit-favouring view of the ‘Conservative’ Party membership, there will have to be a Boris-Raab coming-together in some form to counter the expected Gove-Hunt equivalent. The supporters listed in the Javid and Hancock columns may play a lesser role, but all else is just background noise.