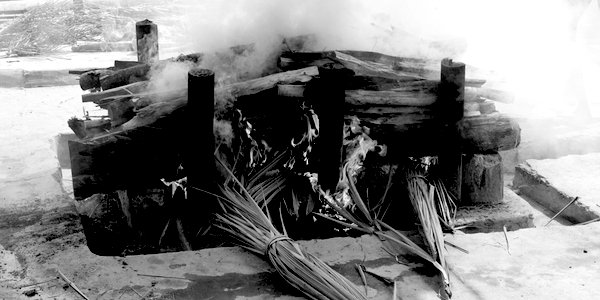 If you want to wind up the self-flagellating, self-loathing, British Empire-hating, West is worst, I’ve got a bee stinging my imperial backside brigade, do what I did when I taught at Liverpool Hope University. At the start of every lecture on postmodernism, I performed this experiment on my student guinea pigs.

‘If you had been a British colonial administrator in India, would you have let the natives under your governance burn the widow at the funeral of a man who had died?’ I would ask my snowflake students. The response was shocked silence. It was as if a Bengal tiger had got their tongue.

Their entire educational system had indoctrinated them to believe that Rule Britannia was the supreme avatar of evil since Columbus introduced tobacco to Europe. Their ‘edjukayshun’ had also brainwashed the juvenile sponges into believing that all cultures are equal. So for Governor-General Lord Bentinck to abolish this charming indigenous practice through the Bengal Sati Regulation Act of 1829 was colonial, racist and white supremacist.

On one occasion after much needling, a student blurted out: ‘I would have given the women a choice.’ I asked him if he knew any women who would relish being barbecued on a funeral pyre. He started fiddling with his iPhone. I’ll admit I pinched this idea from Allan Bloom’s The Closing of the American Mind. When Professor Bloom posed this question to his students at Harvard, he got a similar response. ‘They either remain silent or reply that the British should never have been there in the first place,’ he writes.

My morally relativistic students adamantly believed that Western colonialism was immoral. But they were unwilling to say that burning a woman alive on her husband’s funeral pyre is immoral and that it was moral for the British to ban sati.

With this background, I can well understand why heresy hunters are attempting to gag Professor Nigel Biggar at Oxford University. Biggar is a leading academic. He has written one of the most substantial and provocative books on the just war theory. I bought his book In Defence of War a couple of years ago and it cured me of the virus of utopian pacifism. It gave me the ammunition to combat the ‘confection of hokey, fatuousness and noise’  (Jeremy Paxman’s description of Justin Welby’s New Year ‘massage’) preached in most Anglican pulpits on occasions such as Remembrance Sunday.

Biggar is a big gun at Oxford. He has the grand title of Regius Professor of Moral and Pastoral Theology. His project on ‘Ethics and the Empire’ will analyse the impact of Britain’s imperial past. The academic thought police began stampeding like a herd of mad Indian elephants on steroids when Biggar wrote an article in The Sunday Times titled ‘Don’t feel guilty about our colonial history’.

More than fifty Oxford academics signed a public petition condemning Biggar. For them, Biggar is worse than a Holocaust denier (or that ultimate abomination – a climate change denier).

Biggar’s piece was measured. He quoted from Bruce Gilley, political scientist at Portland State University. ‘For the last 100 years, Western colonialism has had a bad name. It is high time to question this orthodoxy,’ Gilley writes. ‘The notion that colonialism is always and everywhere a bad thing needs to be rethought in light of the grave human toll of a century of anti-colonial regimes and policies.’

A perfectly reasonable proposal for an academic to put forward, you’d have thought? Coming from India, it’s what my wife and I have been saying to the hand-wringing chattering classes for the last 17 years of our stay in Britain, especially when at High Table in Cambridge the sackcloth-and-ashes crowd have whispered in my ear: ‘We are so ashamed of what we did in your country.’

What did you do? Build roads. Bring law and order. Unify five hundred squabbling fiefdoms under petty maharajahs into a single country that had never existed. Create the world’s largest democracy. Give us the English language (and not just so that we could sell you Viagra through call centres in Bangalore). Real education (not the New Labour child-centred absurdity). So shut your fake guilt factory and take your patronising fatuity elsewhere.

Of course, British colonial rule was on occasion harsh and oppressive. But in that case why bash only Western colonialism? The British Raj was around for a couple of hundred years in India while Islamic imperialism existed for centuries.

Francois Gautier in his book Rewriting Indian History says: ‘The massacres perpetuated by Muslims in India are unparalleled in history, bigger than the Holocaust of the Jews by the Nazis; or the massacre of the Armenians by the Turks; more extensive even than the slaughter of the South American native populations by the invading Spanish and Portuguese.’

Even ‘tolerant’ emperors such as Babur (1483-1530) and Akbar (1556-1605) and other more militant Muslim rulers ruthlessly stamped Islamic imperialism on the Indian subcontinent by destroying thousands of temples and building mosques on their foundations. The British, on the other hand, actually paid for the upkeep and refurbishment of thousands of Hindu temples and for a very long time refused to send Christian missionaries to India (even as chaplains)!

‘Contrary to the conventional wisdom, it is the Middle East where the institution of empire not only originated (for example, Egypt, Assyria, Babylon, Iran, and so on) but where its spirit has also outlived its European counterpart,’ writes Professor Efraim Karsh in his book Islamic Imperialism: A History.

Post-colonial guilt is a subtle form of racism and white supremacy. The premise is simple. The poor benighted black or brown subjugated peoples were subjects. The white colonial rulers were the actors and the agents. The colonised were helpless and continue to be helpless because of ‘us’ (Western white liberals). It is all about ‘us’ because we conquered you and only we can make a difference to you today and we will make that difference by whipping ourselves until we finally descend to your level – where you poor things have existed and will continue to exist if we don’t step in and save you. As it was in the beginning, is now and forever shall be. Amen.