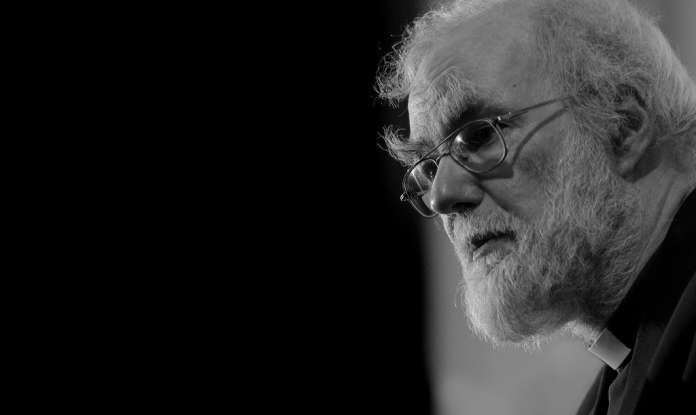 Rowan Williams is more dangerous than Donald Trump. No, you don’t need to go to Specsavers. You read that right. The former Primate of All England is a greater threat to democracy than the President-elect of the United States of America. In an article in this week’s New Statesman, bordering on the hysteria of a doomsday prophet misreading the book of Revelation, Dr Williams sets fire to his designer eyebrows and thunders through his apocalyptic megaphone, warning us that ‘mass democracy has failed—it’s time to seek a humane alternative.’

Dr Williams is an eyebrow, oops, I mean, highbrow academic. Every statement he makes dies the death of a hundred footnotes and a thousand qualifications. Journalist Steven Glover likens Rowan-speak to ‘wading through cold porridge with a lead weight attached to one’s feet.’ Benjamin Disraeli might have described him as a ‘sophistical rhetorician, inebriated with the exuberance of his own verbosity.’

Almost anything emanating from Rowan Williams ‘reads like a master-class in ecclesiastical imprecision’, laments Kevin Myers. Reading Rowan, is like reading the telephone directory, only upside down. Had the CIA read his writings aloud to detainees at Guantanamo Bay, the poor creatures would have cracked sooner than most under this sophisticated form of torture.

So why is the prelate of ponderous, pompous, and pretentious prose suddenly calling for the conflagration of the Constitution like the pastor of the Westboro Baptist Church would summon his flock to set fire to the Koran? Because a rather odious businessman called Donald Trump won the US presidential election? Yes.

Let’s examine Rowan’s argument or lack of one. His Claim: Mass democracy has failed. What does he mean by “mass” democracy? Aren’t all modern democracies “mass” democracies—where anyone above 16 or 18 can vote? Is he suggesting the revival of an Athenian-style democracy where only adult males completing military training could vote? Or does he mean a system in which ‘the number of voters is so large that very few voters know the candidates personally,’ as economist Fred Foldvary defines it? In case of the latter, it is legitimate to argue that mass democracy has its fair share of problems and discontents.

But is a US presidential election where the electoral college decides the outcome a valid example of ‘mass democracy’? And do the primate’s premises support his conclusion that mass democracy has failed? Or, is this a thinly veiled ad hominem Rowanesque rant against the new Antichrist of the Left, Donald J Trump?

The archbishop’s main argument for the abolition of mass democracy (code for “I don’t like it when my ideological nemesis Trump wins and fairy godmother Hillary loses”) is his disdain of Trump’s political theatrics—‘the ersatz politics of mass theatre….’ By his logic, people voting for Hillary voted rationally; the ‘basket of deplorables’ voting for Trump was tricked by his theatrics.

Is it illegal or immoral for politicians campaigning in elections to use publicity stunts and oratorical firecrackers? Did Dr Williams expect Mr Trump to take Margaret Beckett’s course on ‘How to make a speech using a robotic voice’? Contrary to Rowan’s claim, Trump is a poor orator. His gestures are forced. His vocabulary is limited. His grammar is faulty. He does not charm you with the gift of the gab like Obama. Would Dr Williams like to identify the precise theatrics used exclusively by Trump that were not used by Hillary Clinton as well?

So what if politicians appeal to the ‘disenfranchised’? Poor Druid Rowan couldn’t fill a chicken coop of ‘disenfranchised’ people with his monotonous ministerial monologues and his mind-numbing oratory of the bland preaching to the bland. So he blasts this ‘cynical betrayal’ of the American unwashed who ‘have no part in real political processes; they can only choose their monarch.’ Read that again! Choosing your monarch/ruler/president is not an act of power? No kidding!

Rowan’s article on the alleged failure of mass democracy reminds me of the story of the centipede whose hundred feet were sore. He asked the wise owl for a solution. ‘Learn to fly and give your feet a rest,’ said the owl. ‘Terrific idea! How do I begin?’ replied the centipede. The owl snapped, ‘I gave you the principle. You go and work out the specifics for yourself.’

With the wisdom and cultivated looks of Albus Dumbledore of Hogwarts, Rowan proposes a magical solution in his mumbo jumbo lingo: better analysis of and investment in local civic activism. So will we have to work out the specifics for ourselves, Dr Williams? Actually, I do know of one group who have done just that. They are based in Gaza. They have food co-ops, microcredit and local civic activism coming out of their ears (plus good ol’ Shariah law recommended some time ago by Dr Williams). They are the perfect antithesis of a mass democracy.

So what does Dr Williams have to say when this utopian micro-democracy opts for a more ‘humane alternative’ and votes in a genocidal Hamas regime?