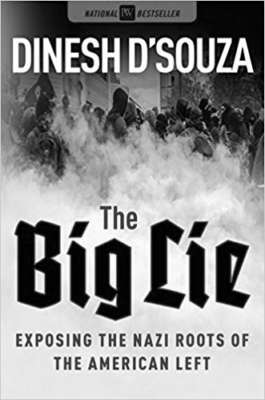 If you love someone on the Left, give him or her a box of dynamite sticks for Christmas. Carefully camouflage it in colourful wrapping paper. Make sure it has a very short fuse, produces a very big bang and gives out both heat and light.

Dinesh D’Souza, my contemporary from Mumbai who migrated to the US as a Dartmouth student, became a celebrity under Reagan, was booted into prison under Obama, gave ‘crooked hag’ Hillary Clinton the thrashing of a lifetime during the presidential elections, and is the star of the conservative speakers’ circuit in the reign of Trump, has written the definitive book which can be described as gift-wrapped dynamite.

In his previous book, Hillary’s America, D’Souza argued that the Democrats were the party of slavery, segregation, Jim Crow, the Ku Klux Klan and Indian removal. In his talks, D’Souza flaunts the fact that not a single Republican owned a slave in the year before the Civil War. The Democrats owned all four million slaves in 1860 and later spawned the Klan as the terrorist wing of the party. The Democrats have never admitted to, let alone apologised for, their racial crimes.

The Democrats are now losing the ‘race’ argument. But they have a new trump card – the Nazi card. D’Souza pins ‘the Nazi tail precisely where it belongs – on the Democratic donkey.’ He show how they, not Trump, are the real fascists and how the Nazis used the racist policies of the US Democratic Party as templates for their own vile anti-Semitic policies of Juden Raus and Lebensraum.

The Left repeatedly links fascism with the Right. D’Souza launches his opening salvo by establishing fascism as a phenomenon of the Left. He follows in the footsteps of Friedrich Hayek’s The Road to Serfdom and Jonah Goldberg’s Liberal Fascism. Drawing on historical scholarship, D’Souza shows ‘how fascism and Nazism both emerged out of a debate within socialism’ when ‘the central prophecies of Marxism failed to occur . . . Marxism split into two camps: the first became Leninism and Bolshevism, and the other became fascism and Nazism.’

So how did Mussolini and Hitler suddenly become ‘Right-wingers’? By a clever sleight of hand, from the 1960s the Left falsified history and suppressed the fact that fascism and Nazism were systems of thought. ‘Instead the Left identified fascism with amorphous tendencies that could just as easily be applied to numerous other political doctrines: authoritarianism, militarism, nationalism, and so on,’ D’Souza writes. He calls this ‘the big lie in full operation’.

D’Souza traces fascism to its creator, Giovanni Gentile, who saw it as ‘nothing more than a modified form of socialism’ which also included an ‘aroused national consciousness’. Gentile urged all citizens to submit to the authority of the state in all matters, not just in the realm of economics. ‘We belong to the government’, the slogan unveiled by Obama at the 2012 Democratic Convention, could well have come from the hymn-sheet of Gentile’s paean to the state or from one of Mussolini’s favourite phrases: ‘Everything in the state, nothing outside the state, nothing against the state’.

D’Souza quotes Stanley Payne’s A History of Fascism. ‘The nucleus that eventually founded fascism in Italy did not stem from the right-wing nationalists but from the transformation of part of the revolutionary left,’ Payne insists. Historian of fascism Anthony James Gregor also points out that ‘the first fascists were almost all Marxists’.

So it was with Nazism. Hitler changed the name of the German Workers’ Party to the National Socialist German Workers’ Party (NSDAP). ‘We are socialists. We are the enemies of today’s capitalist system of exploitation . . . and we are determined to destroy this system under all conditions,’ Hitler said in 1927. Hitler’s socialist policies included nationalisation of large corporations, government control of banking and credit, profit sharing for workers in all large companies, a broader pension system and universal free health care and education.

Despite the Left’s attempts to portray Hitler as a Right-winger, D’Souza shows how Hitler allied himself completely with the pro-slavery and Indian removal policies of the Democrats. Nazi policies such as Lebensraum, concentration camps and genocide were created by the Democratic Party in the US and used on Indians and blacks long before Hitler adapted them to his own situation.

The Nazis drew from American laws on inter-racial marriage, laws restricting immigration on the basis of race, and the Jim Crow laws. They modified the race laws into the Nuremberg Laws. Surprisingly, they were actually far less racist than the Democrats (!) because while Southern segregation laws were based on the so-called ‘one drop rule’ (even a single drop of black blood qualified one as black), the Nazis relaxed this to having three Jewish grandparents to qualify for being Jewish.

D’Souza is defending his country of adoption from Left-wing libel that is sweeping the schools, universities, media, politics and Hollywood – the libel that America’s original sin is racism and slavery. ‘Yet we can search the founding period in vain for the kind of bigoted extremism that defines Democratic rhetoric and practice in the nineteenth and early twentieth centuries,’ he argues, providing evidence from the writings of Jefferson, Hamilton and other founders.

The Big Lie: Exposing the Nazi Roots of the American Left is a racy book probing the darkest and dirtiest ideological secrets of the Democratic Party. It blasts the Left to kingdom come and fragments Democrat propaganda to ‘couldn’t put Humpty Dumpty together again’ damnation. D’Souza dirty-bomb is meticulously researched and interacts with serious historical scholarship.

D’Souza doesn’t write in pompous and ponderous prose. He lights his short fuse every few pages and rubs his hands in impish glee as the reader is shocked by revelation after revelation. ‘It simply can’t be true! D’Souza is exaggerating beyond belief! Where are his facts, his primary sources, his interaction with other historians?’ you ask every time there is an almighty bang. And then you turn the page and D’Souza inundates you with an academic Armada of evidence.

If you’ve been sickened to the stomach by the ‘Reductio ad Hitlerum’ non-arguments of the New Left who suffer from Trump Derangement Syndrome, you finally have your revenge and a superb toolkit to dismantle the ‘fascism’ rhetoric now cascading from the Leftist Niagara Falls against conservatives.