NewsPaperthe art of publishing
HomeNewsRemainers, eyes closed at the edge of the cliff
179

Remainers, eyes closed at the edge of the cliff 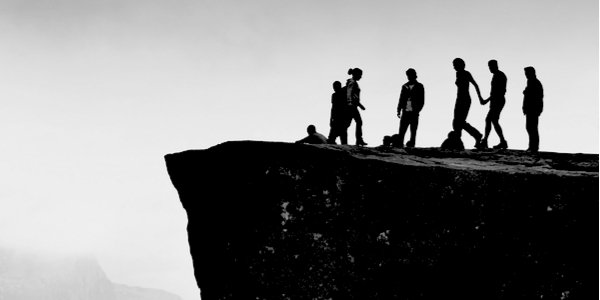 THE Establishment has got cliff edges all wrong. Unless one has a death wish, they are not particularly dangerous when one is aware of them. However, they are exceptionally so when your gaze is distracted elsewhere.

Thanks to their endless Cassandra-like wailings, we are very well aware of the so-called economic cliff edge of a ‘hard’ (i.e. real) Brexit. However, perhaps because so many elite Remainers in the Establishment seem to have an Excel spreadsheet where a culture should be, they seem utterly blind to their – and our – own fast-approaching cultural cliff edge: the huge and irreversible loss of respect and trust that any Brexit outcome will now certainly bring between the governors and the governed.

Let us take each conceivable Brexit outcome in turn and see what the consequences are, going from least bad to worst from the Establishment point of view:

1. WTO and disaster. Many within the Establishment could justifiably say they warned about it consistently and it turned out to be true. However, the utter failure to prepare for ‘No Deal’ will cause huge damage to whatever remains of the reputation of British government politicians and officials for basic competence.

2. WTO and no disaster. The so-called ‘millennium bug’ scenario, when despite portents of doom nothing much at all actually happens. Remainers would sulk, the public would breath a sign of relief . . . and no one would believe anything the elite experts and their chattering class acolytes said again.

3. Norway For Now (and for ever and ever, amen). Rapidly becoming the preferred option of Cabinet ministers desperate to avoid a WTO Brexit, some form of EFTA membership would return many aspects of sovereignty whilst ensuring a much smoother economic transition. However, catastrophically from a political point of view, it would not end freedom of movement. Since for a great many who voted Leave, ability to control immigration was the important point of regaining national sovereignty, such an outcome would be perceived as a blatant betrayal of the referendum result. An agreement like this might also come with extra terms and conditions, such as customs union membership, that made it almost as bad as May’s deal (see below). Either way, the so-called ‘Norway for now’ deal may in practice prove it very difficult to leave, storing up ever greater problems for the future.

And now we move from the merely disastrous to the truly catastrophic:

4. Another referendum. We were told that the 2016 decision would be implemented and not be revisited for a generation. Changing the rules of the game would surely be the final nail in the coffin for many, showing that we do not live in a democracy at all. A victory for Remain would lock us into an ever more autocratic but economically failing super-state and unleash revolutionary forces in the process. A victory for Leave would put the Establishment back to square one, but with much less room for manoeuvre and subject to a profound and lasting contempt from the people who would never trust it again.

5. Unilateral cancellation of Brexit. Assuming it were possible via rescinding Article 50, this would cause an even worse reaction than a Remain victory in another referendum would.

6. May’s deal. Perhaps the worst option of all. Binding us in as a humiliated EU colony, with perhaps no way out except by violence. There are very few imaginable scenarios in which a truly fascistic figure could ever take over Britain, but the sense of humiliation and shame that this would bring over time is one of them.

As Michael St George has said in TCW, it is very plain to us conservatives that we face a crisis of how we are governed that is much, much bigger than Brexit itself, and that irrespective of how Brexit is enacted, conservatism can never triumph until the old ways of doing things are fundamentally reformed.

Every crisis is also an opportunity, and the crisis of legitimacy for our liberal Establishment that Brexit will bring must be exploited by conservatives if we are ever to see our ideas in the ascendant again.