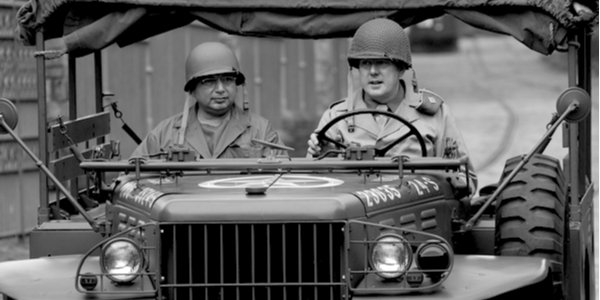 IT was one of those warm, mellow September days with which England is sometimes blessed before autumn sets in.

‘This was a perfect Sunday, a morning for a walk down a country lane and a pint at the local,’ recalled Fred Warrender.

Roy Edwards agreed. ‘Everything was so serene it was like going on a bus outing to the seaside.’

But the destination of the two young men was neither the pub nor the beach on that sunny day 76 years ago today – September 17, 1944.

Instead, Private Warrender and Private Edwards, whose words were recorded in Cornelius Ryan’s book A Bridge Too Far, were among 34,000 Allied airborne troops about to be flown from England to Holland at the start of Operation Market Garden.

Hours later, their English idyll was only a memory as they became embroiled in the bloodshed of the ill-fated attempt by the Allies to end the Second World War by Christmas.

The plan was for British, American and Polish paratroopers and glider-borne soldiers to capture five key bridges along a 62-mile route leading from the Belgian border to the Lower Rhine at the Dutch town of Arnhem.

British tanks, artillery and infantry would follow hard on their heels. Once the ground forces reached the final bridge at Arnhem, they would pour into Germany, overrunning the Ruhr industrial region, the centre of Nazi war production.

Tragically, it did not work out like that. Market Garden was a costly failure, with around 16,000 Allied troops killed, wounded or captured. The British 1st Airborne Division was hardest hit, with almost 1,500 of its 10,500 men killed and around 6,500 taken prisoner.

Today, it is widely agreed that the whole operation was probably fatally compromised from the start. It was too hastily planned and over-ambitious, with unrealistic objectives, underestimates of enemy strength and no contingency for delays or mistakes. Most recently, the reasons for the disaster were starkly set out in Antony Beevor’s book Arnhem: The Battle for the Bridges, 1944.

But nothing can detract from the dash, courage and determination of the men who took part.

In particular, the crossing of the River Waal under fire by US 82nd Airborne troops in flimsy canvas rowing boats to secure the Nijmegen bridges was a breathtaking act of bravery.

The stubborn stand of Colonel John Frost’s 2nd Parachute Battalion, holding on to the northern end of Arnhem Bridge, waiting for relief that never came, was an epic of sacrifice.

For all that, the overall operation was a heroic failure which – like the Dunkirk evacuation – nonetheless entered the British national psyche as somehow a triumph.

In 1946, a reconstruction of 1st Airborne’s role in the battle was made into a film, Theirs is the Glory, which became a huge cinema hit. Many of the participants were veterans of the battle who had been called on to re-enact their experiences.

They included Major Freddie Gough who after being captured was congratulated by a Waffen-SS officer on the performance of his men. The German said: ‘I fought at Stalingrad and it is obvious that you British have a great deal of experience in street fighting.’ Gough told him: ‘No. This was our first effort. We’ll be much better next time.’

Another hero was Major Digby Tatham-Warter, who carried an umbrella because he kept forgetting passwords and wanted a way of being recognised. He said ‘only a bloody fool of an Englishman’ would carry an umbrella into battle. During the fighting around Arnhem Bridge, he disabled a German armoured car by poking his umbrella into the driver’s eye. Noticing a chaplain pinned down by enemy fire while trying to reach wounded soldiers, Tatham-Warter got to the clergyman and escorted him across the street under the ‘shelter’ of his umbrella. In the 1977 film A Bridge Too Far, Tatham-Warter was depicted as Major Harry Carlyle and seen apparently dying of wounds. In fact, Tatham-Warter survived and was taken prisoner, later escaping back to the British lines.

It was men such as these – and, of course, the legions of ordinary footslogging soldiers – who salvaged a measure of redemption from the wreck of the Arnhem operation and indeed deserved the glory.

With the passing years, the number of surviving Market Garden veterans grows ever smaller and today’s anniversary commemorations in Arnhem will be severely curtailed because of coronavirus.

Let us salute them. And perhaps remember that this country once faced a far more dangerous enemy than Covid-19, and in the end we won.