NewsPaperthe art of publishing
HomeNewsRequiem for a faraway country
0

Requiem for a faraway country 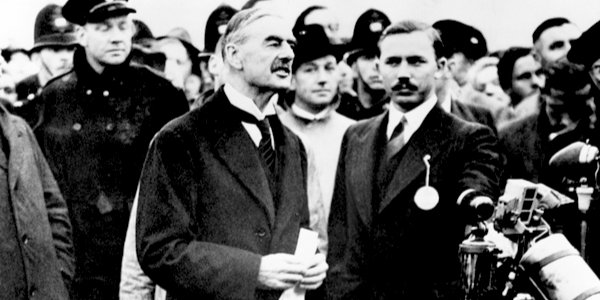 EIGHTY-TWO years ago this morning – Sunday, September 3, 1939 – families gathered apprehensively round their radios to hear the mournful voice of Neville Chamberlain telling them that Britain was at war with Germany.

The Prime Minister’s broadcast at 11.15am on the BBC Home Service lasted only around five minutes as he gave the news that a British ultimatum demanding the withdrawal of Germany’s invasion forces from Poland had been rejected.

It was the second time in a generation that this country had taken up arms against Germany, after emerging victorious but disillusioned in 1918 from the terrible four-year attrition of the Great War.

The build-up to a new world conflict had been escalating since September 1938, when Adolf Hitler was pressing his demands to annex Czechoslovakia’s German-speaking Sudetenland border regions and incorporate them into the Third Reich.

With Britain and France desperate to keep the peace, Chamberlain made a radio broadcast on September 27, 1938 which showed his apparent indifference to the fate of the Czechs.

He said: ‘How horrible, fantastic, incredible it is that we should be digging trenches and trying on gas masks here because of a quarrel in a faraway country between people of whom we know nothing.’

They were words that would return to haunt him.

Three days later, on September 30, the infamous Munich Agreement was signed. Without consulting the Czechs, Britain and France agreed to the Germans taking over the Sudetenland. The Czechs had no option but to comply.

Chamberlain returned to a hero’s welcome in Britain, waving his piece of paper bearing Hitler’s signature. The Prime Minister declared that he had achieved ‘peace for our time … peace with honour’.

But in March 1939, Hitler took over the remainder of Czechoslovakia and on September 1 his armies steamrollered into Poland.

Where this historical recap is leading, of course, is to the current situation in Afghanistan – a much more ‘faraway’ country to us than Czechoslovakia.

The global geopolitical circumstances in the 1930s were different from those in 2021. But the consequences for Czechoslovakia and Afghanistan of being abandoned to their fate by more powerful nations were similarly grim.

After Munich, the Czechs suffered almost seven years of German occupation followed by more than 40 years under the heel of a Soviet-backed communist regime.

Now Afghanistan has fallen victim to possibly even worse barbarism. The shameful and shambolic Allied withdrawal means it is rapidly descending from a nominally free and fair state into another long night of medieval Taliban rule.

The question that will once again be exercising minds in high places is whether it is worth nations such as Britain and America ever becoming involved militarily in countries that are not directly threatening them.

In the case of Czechoslovakia in 1938, it is arguable that there was a strategic interest for Britain, because Hitler might have been halted on his road to European conquest if we had threatened him with war. However, there was no will in this country for armed intervention and it is highly unlikely that it would have stopped the Nazi dictator.

As for Afghanistan, it has been argued that once the Allies ejected the Taliban following the 9/11 terrorist attacks in September 2001, their job was done.  Instead, the decision was taken to stay and attempt nation-building. But that was doomed because the Taliban never went away – they just took to the hills, launched a guerilla war and waited.

The sell-out of Czechoslovakia in 1938, followed by the invasion of Poland in 1939, led to world war. It’s hard to see the abandonment of Afghanistan having such consequences. But, as happened after Chamberlain declared ‘peace for our time’ 83 years ago, the world has suddenly become a much more dangerous place.

The Afghan debacle has made a mockery of the famous prediction in 1989 by American political scientist Francis Fukuyama that, with the Cold War triumph of Western capitalism and liberal democracy, we had reached ‘the end of history’.

Fukuyama has recently stepped down from his post at Stanford University in California. But surely even he must now acknowledge that, far from history standing still, it is constantly moving in unpredictable patterns. And, as the ignominious retreat from Afghanistan starkly shows, it can turn round to bite us.