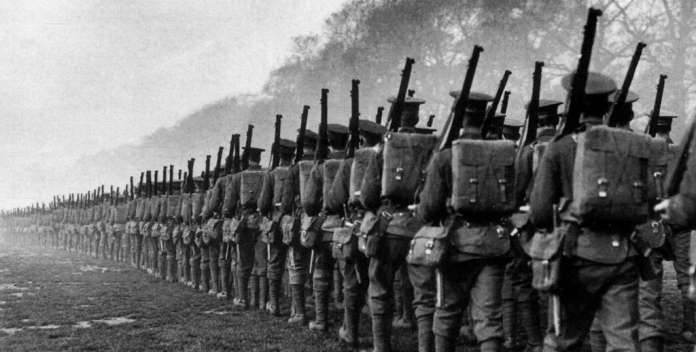 (This sermon was preached in the Parish Church of the Ascension, Oughtibridge today, Remembrance Sunday)

It is a very moving moment in this Remembrance service when the names of the fallen are read out. From the names on our War Memorial we can be absolutely sure of one thing and fairly sure of one another.

All those people from our three villages who died in World Wars I and II were, bar one valiant lady, men – we know that from their names – and we can be fairly sure that they were young men, for it was overwhelmingly young men who fought in the frontline of those wars.

Some of them would have been men in their twenties and perhaps early thirties, who had wives and children of their own. Probably, most of them were not much older than our youngest son who is due to turn 18 next summer. So behind the names on our War Memorial is the profound grief – unimaginable unless you have been through it – in some cases of the wives and children but in most cases of the mothers and fathers of these young men.

Those parents would have known what the man in our story from John’s Gospel (chapter 4 verses 46 to 54) was going through when he came to Jesus because his son was at the point of death.

Jesus’s immediate response to this distraught father who had begged him to come from Cana to Capernaum to heal his son is very striking: ‘Unless you see signs and wonders you will not believe’. The ‘you’ here is plural so Jesus is not just addressing the man but everybody else within earshot.

Jesus is issuing a rebuke. He’s telling them off: ‘Unless you see me performing a supernatural act, you won’t believe that I am what I am, the divine Son of God. You are performance-driven believers. If I perform for you, you will believe. If I don’t, you won’t.’

But this desperate father was different. First of all, he loved his son. He wasn’t wanting a stunt, he was wanting his son to be saved from death. In reply to Jesus’s general rebuke, he said: ‘Sir, come down before my son dies.’

And then he took Jesus at his word before his son was healed. ‘Go; your son will live,’ Jesus said to him and the man believed the word that Jesus spoke to him and went his way.

This man trusted Jesus before he had the supernatural healing that he so desperately wanted and found that by time he got home his son was as right as rain.

He asked his butler, for he was a member of the nobility, a wealthy man; ‘When did the boy get better?’ ‘Oh, it was yesterday about 1pm.’

And the father knew that that was the hour when Jesus had said to him: ‘Your son will live.’

We need to learn two things from this amazing story in John’s Gospel. The first thing is about Jesus, the second thing is about the nature of saving faith.

About Jesus, we learn that he has power over life and death. The boy was about to die, but Jesus allowed him to live. Because he is the divine Son of the one true and almighty God, the glorious supernatural creator and ruler of the universe, Jesus has the power to give life to people who would be otherwise be lost to death. He only has to say the word.

After our moment to die comes, which it will, Jesus only has to speak the word and he can restore us to life.

That is because, as God’s one and only Son, the Lord Jesus is the divine life-giver: ‘Go; your son will live.’

Secondly, we learn about the nature of saving faith. It is about taking Jesus at his word. It is an obvious thing to say that none of us here this morning has ever seen Jesus perform a miracle. Some people did see Jesus doing divine deeds and hear him speaking divine words. They wrote down what they saw and heard in the Bible so that we can learn about Jesus. But none of us here 2000 years later has ever seen Jesus or seen him performing a miracle.

But we do have his word, the good news he speaks to us through the Bible: ‘Believe in me and you can be right with God. All the wrong things you think and say and do, which ruin your relationship with God, can be forgiven and you can have life with God for ever. I have the power to raise you to life again after you die and you can be a renewed, restored, healed person with all the evil and the ruinous spiritual and moral disorder taken out you.’

Take Jesus at his word and we will live.

Share
Facebook
Twitter
WhatsApp
Email
Previous articleLeslie Loftis: New ways of spending a penny. Houston’s bid to enforce transgendered men on women’s loos goes down the pan
Next articleReader’s Comment of the Day: Perhaps these pampered students would pay back their Rhodes scholarships