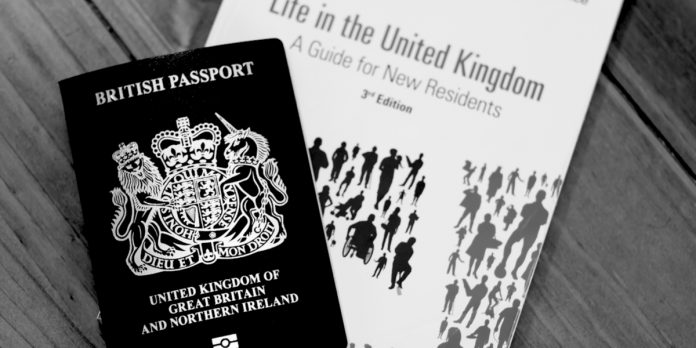 PEERS are demanding an urgent review of the Life in the UK test which foreign nationals seeking British citizenship must pass.

Applicants sit the 45-minute exam after studying an official booklet outlining Britain’s history, society and constitution. To succeed, they must answer 75 per cent of 24 multiple choice questions correctly.

A report by the Justice and Home Affairs Committee of the House of Lords says some questions are ‘trivial’, ‘outdated’ and even offensive, such as asking what to do after spilling beer on someone in the pub. Other allegedly contentious areas include whether the British Empire was ‘a force for good in the world’ and if Britain stood alone against Hitler.

I can reveal that Boris Johnson’s Downing Street team has already produced a new version of the exam, featuring questions more in keeping with today’s Britain, as these leaked extracts show …

What was the most significant event of the 19th century?

a) Keeping chimneys clean by sending children up them;

b) Boris Johnson’s great-grandfather being born in Turkey.

What should you do if you spill beer on someone in a pub?

b) Prepare to receive a fist in your face;

c) Squeeze the beer out of their clothes and back into your glass because these days it’s too dear to waste.

Who was Winston Churchill?

a) A drunken old war criminal;

b) A nodding dog in an insurance advert;

c) A prime minister who wasn’t a patch on Boris Johnson.

How long can a person legally stay glued to a British road?

a) Until a motorist is arrested for trying to get them to move;

c) Until they’ve been interviewed sympathetically by the Guardian;

b) Until a police officer brings them a cup of coffee and a cream bun and says all roads for 20 miles around are totally gridlocked so they may as well go home.

After invading Britain in AD43, the Romans brought significant improvements. Which was the most important?

b) Establishing thermal baths in Bath, so people could have a good wash;

Which of these statements best describes the White Cliffs of Dover?

a) The natural wall-like symbol of Britain’s proud history as an island nation;

b) The inspiration for a much-loved wartime song;

c) A handy aiming point for dinghies crossing the Channel.

How long do laws made by the UK Parliament last?

a) Until repealed by a subsequent Parliament;

b) Until some nameless Johnny Foreigner judge decides he knows better.

What was the coronavirus pandemic?

a) The greatest threat to mankind since the Black Death, defeated only by the courageous, timely actions of Boris Johnson;

b) The greatest threat to mankind since the Black Death, defeated only by the courageous, timely actions of Boris Johnson.

What was the main reason the British Empire was a force for good in the world?

a) It gave us curry;

b) It provided comprehensible names for places around the world instead of some native gibberish;

c) It allowed lots of Scots to emigrate.

If you see a statue being toppled in Britain, what should you do?

a) Call the police;

b) Watch it doesn’t fall on you and join a howling mob dumping it in a harbour.

How much of Britain’s energy is supplied each year by renewables?

a) Enough to keep a one-bar electric fire running for ten minutes;

Why was the Habeas Corpus Act of 1679 important?

a) It ensured that no one could be imprisoned illegally;

b) It was the first Latin phrase the five-year-old Boris Johnson translated.

Which of these is the biggest myth in Scotland?

a) The Loch Ness Monster;

b) A clamour for independence.

What is the meaning of Net Zero?

a) Britain’s fishing industry has been run down so much that trawlers no longer have nets;

b) The carbon neutral paradise being achieved by Boris Johnson.

Why did Britain stand alone against Hitler in 1940?

a) He wanted us to join a united Europe;

b) To stop us getting him mixed up with Charlie Chaplin;

c) To ensure Dad’s Army would be made 28 years later.

Which of these is a masterpiece of British fictional writing?

a) Nineteen Eighty-Four by George Orwell;

b) Statement to Durham Constabulary about alleged illegal beer drinking during lockdown by Keir Starmer.

Which historic event should all true Britons celebrate each year in June?

a) The Duke of Wellington’s defeat of Napoleon at Waterloo;

b) The D-Day invasion of Normandy;

NOTE: All questions must be answered. Exam papers will be personally scrutinised by the PM. Unsuccessful applicants will immediately be put on deportation flights to Rwanda, but their planes will be dramatically halted on the runway by human rights injunctions and they will stay in Britain permanently.