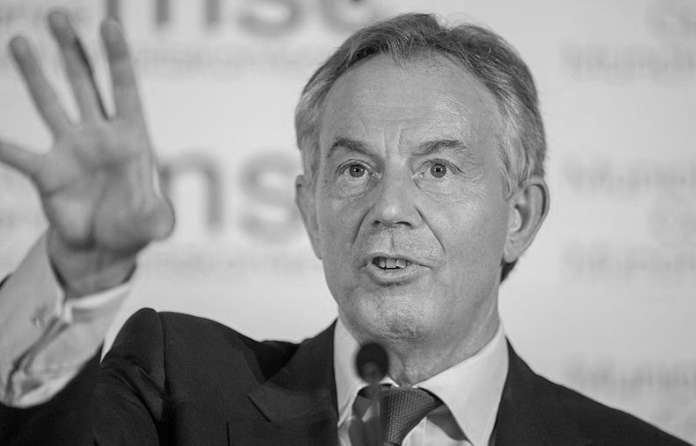 The news that Tony Blair is considering re-entering British politics will have come as a welcome relief to those who have missed his contribution these last 9 years. But to the other 99.99 per cent of the population, it may have come as a shock to think that after so long away he still has not managed to cure himself of his delusion that anyone is in the least bit interested in what he has to say.

What does Tony have in mind, you might ask? In an exclusive scoop, I have managed to get my hands on a copy of the speech he hopes to deliver at the inaugural conference of Global Britain – the nation’s newest party – early next year. The event is set to be held at Farnham Village Hall (seats 80, 100 standing), against the backdrop Global Britain: New Hope in a New Centre for a New Future.

The speech was, as ever, penned by Alastair Campbell:

I had intended to be taking it easy. At my time of life. Cherie keeps telling me that it’s time I put my feet up. Take a rest. Relax. Mind you, she was telling me that two days after I walked through the door of Downing Street all those years ago. (Should hopefully get laugh – AC)

But although I’ve been away, I can tell you I’ve not been idle. In fact, you could say I’ve been on something of a journey. Consulting. Speeches. Trips to Kazakhstan.

Bringing peace to the Middle East.

Bringing hope to millions through my faith foundation.

Some journey, I can tell you.

But why give that all up? Why throw all that in and return to politics? I can tell you in just three words actually: Because … I … care. (Do make sure you do that quivery voice thing that you’re so good at here, Tone – AC)

I care about politics.

I care about Britain.

I care about you.

Now I know that when I say “sadly I’ve had to come back,” many will say “amen” to that (might get a laugh, depending on your timing – AC).

But I can honestly say I took them because I had to.

Big challenges. Hard choices. I’ve never shrunk from them. And I’m not going to shrink from this challenge. Even if it is unpopular.

You see when I left British politics a decade ago, I left thinking the country was fixed. That it was cured of its old ways and would never try to go back.

The forces of conservatism never died. Didn’t go away. Didn’t accept the fate I consigned them to in the dustbin of history.

No. They merely regrouped. And now they’re back.

Like some sort of monster in a movie that just won’t be killed. Like Arnie in The Terminator. They just keep coming back.

Just look at the state of British politics today.

Look to the left and what do we find? An ultra-left Labour Party, taking us back to the 60s. Nothing like the Party I created (I’ll let you take credit again but remember you owe me – AC).

Look to the right and what do we find? The hard right. Brexit Tories. Willing to destroy this country by taking us out of the European Union where we rightfully belong.

And that’s the tragedy we now have in British politics since I walked away.

Friends, I’m almost ashamed to say those words “since I walked away”. Sometimes, when I’m struggling to sleep at night, I wonder what would have happened had I stayed on. Would we be in the mess we’re in now? Well, we certainly wouldn’t be looking down the barrel of the Brexit gun, that’s for sure (Will make sure that our people in the audience applaud wildly at this point – AC).

But what do we now have? Two sides. The hard left. And the hard right. A one party state.

No choice. No future. No … (pause for effect to make the audience wonder what might come next, – AC) … no hope.

I remember that when I left British politics, I left Britain a better place.

Crime down. Education up. Poverty down. Healthcare up. For the many, not the few.

Friends, I never thought I’d hear myself say it, but we need to turn the clock back. Urgently. We need to turn the clock back to the time when we stood at the dawn of the new millennium, and I set out how, as a nation, we could renew British strength and confidence for the 21st century. And how we could make it a century of progressive politics after one dominated by Conservatives.

But we’ve lost our way. And so the challenge is to turn back. Backwards not forwards.

This is why I have created this party. Global Britain (I’ll let you take the credit for this too, but you owe me big time – AC)

The future is people.

A party that can imagine all the people, sharing all the world … (I know you’re partial to a bit of Lennon, so I stuck it in for you Tone – AC)