NewsPaperthe art of publishing
HomeNewsRob Slane: The Trump ‘dossier’ shows how the media launder the news
107

Rob Slane: The Trump ‘dossier’ shows how the media launder the news 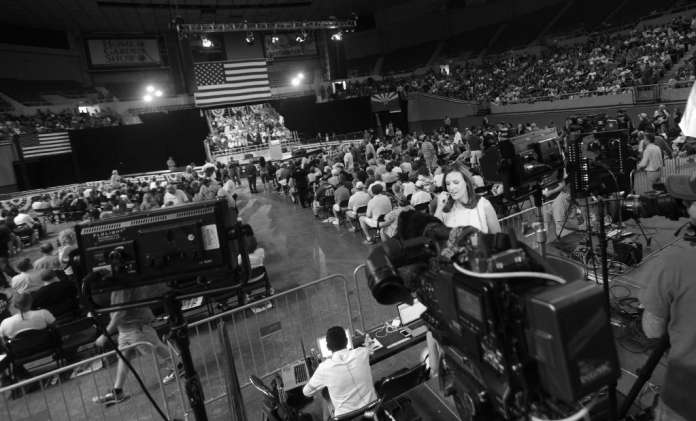 There are generally reckoned to be three stages involved in the process of money laundering. The first is the introduction of money into the financial system. This is known as placement. The second is the attempt to conceal the illegal nature of the funds by carrying out various transactions. This is known as layering. And then thirdly, the launderer makes “legitimate” purchases with the funds they have placed and layered through the system. This is called integration.

Put another way, stage one gets the money into the system, stage two is intended to obfuscate and create confusion, and stage three is designed to look like a perfectly a normal transaction, so that the dirty money comes out looking clean.

What now seems to pass for news, especially during and since the US election on November 8th last year, follows an eerily similar pattern:

Placement – Firstly, an unverified, unsourced story is put out in one or a number of the big media outlets. I say unsourced, but this is not exactly what they do. Often they say something like, “according to a source who remained nameless,” or “anonymous officials say”. So not exactly a source, and certainly not credible, but it does serve the purpose of giving the impression of being true.

Layering – Secondly, other outlets then regurgitate the story, reporting on that original unverified, unsourced story as if it were true in such ways as to confuse and hide the problems with the original piece. Unless you have all day every day to follow these stories back to their origins – and most of us don’t – it becomes almost impossible to work out how the original story came about, much less whether it actually had any credibility.

Integration – Finally, whilst some are still trying to understand where the original story came from, and are attempting to debunk that, the media move onto another outlandish story, but as they do so they sneak into them the assertions made in the original unverified material as if they were absolutely proven. In other words, regardless of the illegitimacy of the original piece and the assertions it made, it has now become “clean”, passing into the generally accepted narrative, even though it might have been a complete pack of lies.

The recent 35-page “Trump dossier” is a classic case in point. The original document was concocted by a former British Intelligence operative, working for a private organisation called Orbis Business Intelligence Ltd. The fact that it was done on behalf of “anti-Trump Republicans, and later by Democrats” ought to set alarm bells ringing from the outset. The dossier was passed into the hands of various news organisations, though initially none were prepared to print it because its claims were so outlandish that for once they erred on the side of caution. At some point after this, it found its way into the hands of the infamous John McCain, who then passed it onto the FBI. And there it stayed put throughout the last few weeks, ready to be unleashed at the optimum time.

Certain US Intelligence operatives then informed CNN that they now believed the document to be credible, and CNN proceeded to announce this news to the world (although they didn’t reveal the contents). Their announcement was then the cue for Buzzfeed to release the document in full, but even then they did so with the disclaimer that there is “serious reason to doubt the allegation”. Didn’t stop them publishing this uncorroborated, unverified document containing allegations of the worst kind though!

The dossier itself was evidently a fake. Many excellent analysts (for example here and here) have thoroughly debunked it, just as many did the equally asinine 25-page Intelligence Community Assessment released on January 6th, which came with a disclaimer that, “Judgments are not intended to imply that we have proof that shows something to be a fact” (see the ex-CIA analyst, Philip Giraldi on The American Conservative).

That ought to have been the end of the story, other than Buzzfeed compensating Mr Trump and offering a deep apology. But no, having gone through the placement stage of getting an unverified, unsourced and frankly amateurish piece of work into the news system, the mainstream media are now onto the layering stage. Consider this from the BBC:

“The significance of these allegations is that, if true, the president-elect of the United States would be vulnerable to blackmail by the Russians … I understand the CIA believes it is credible that the Kremlin has such kompromat – or compromising material – on the next US commander in chief. At the same time a joint taskforce, which includes the CIA and the FBI, has been investigating allegations that the Russians may have sent money to Mr Trump’s organisation or his election campaign.”

That first statement is of course nonsense. How can you blackmail someone with information that the whole world has just been told about? But see what this does? Instead of pursuing the real story here, which is how these lurid and outlandish allegations came to be released, and why now rather than a few months back, and instead of a proper journalistic effort to investigate the credibility of the former British Intelligence officer who allegedly produced the dossier, the author of the BBC piece, Paul Wood, has already given them credibility by telling us what would happen if they are true.

In other words, he – and this is how the media now seems to work – has given credibility to an unverified and unsourced account from one man who we know nothing about, and so the spurious information, which had been placed into the system, has now successfully been layered, with the average reader now so utterly befuddled that they have no way of knowing what is and isn’t true.

Another example comes from the New York Times, which wrote of the dossier:

“The consequences have been incalculable and will play out long past Inauguration Day.”

Again, rather than questioning the credibility of the document, and how such an unverified and slanderous report went public, they ever so subtly begin to give it and its allegations credibility.

And so the dossier, like other claims before, will no doubt pass onto the integration stage. When the next set of allegations comes out, they will come with the implicit assumption that at least some of the claims in the “Trump dossier” were true. And any investigations into the origins of this whole dodgy dossier and this whole sordid episode will be left to those analysts that are read by a few thousand people, and who the media derides as “conspiracy theorists”.

That, basically, is how the media now seems to work. It gets made up or unverified stories into the news system (placement), then befuddles us and confuses us rather than investigating the real story (layering), before finally those unverified and unsourced stories quietly become the accepted narrative of the day (integration). The news is now clean. It has been laundered. Let’s move on and see what other dirty news we can get into the system and “make clean”.

Share
Facebook
Twitter
WhatsApp
Email
Previous articlePaul T Horgan: The NHS was born in crisis
Next articleBelinda Brown: For the sake of boys we must value fathers