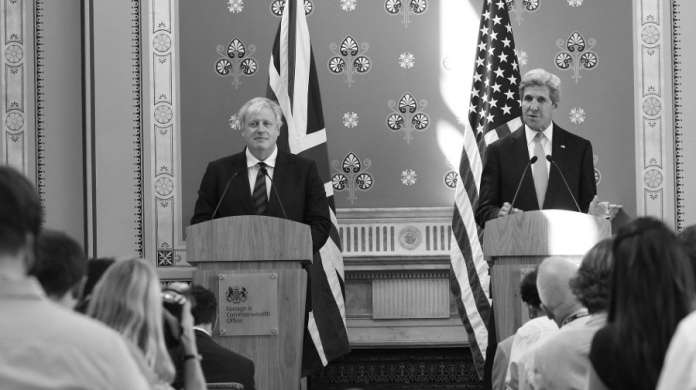 Well that didn’t take long. Like a “Great Supine, Protoplasmic, Invertebrate Jelly”, Britain’s new Foreign Secretary has fallen into line with US foreign policy with remarkable speed. This despite the fact that the position he now apparently supports is fundamentally at odds with the position he held prior to assuming his new position. That position is with regard to Syria, but before I come to the July 2016 Mr Johnson, let me first remind readers what the December 2015 Mr Johnson said:

“We need someone to provide the boots on the ground; and given that we are not going to be providing British ground forces – and the French and the Americans are just as reluctant – we cannot afford to be picky about our allies. We have the estimated 70,000 of the Free Syrian Army (and many other groups and grouplets); but those numbers may be exaggerated, and they may include some jihadists who are not ideologically very different from al-Qaida. Who else is there? The answer is obvious. There is Assad, and his army; and the recent signs are that they are making some progress. Thanks at least partly to Russian airstrikes, it looks as if the regime is taking back large parts of Homs. Al-Qaida-affiliated militants are withdrawing from some districts of the city. Is that a bad thing? I don’t think so.”

Of course the problem with that position, at least as far as the US is concerned, is that it ticks all the wrong boxes. It implies that the “moderate rebels” might not be quite so moderate after all. It makes the assertion that the Syrian army and Russian airstrikes have been having success against the likes of Daesh (so-called Islamic State). And it implies that Bashar al-Assad is key to defeating them.

And so Mr Johnson had to change his mind. In a statement before his meeting with Mr Kerry, Mr Johnson said:

“I will be making clear my view that the suffering of the Syrian people will not end while Assad remains in power. The international community, including Russia, must be united on this.”

That’s his view you see. Always held it he has. Well from the beginning of this week anyway. I know not what methods they use on their MPs at Tory Central Office Room 101, but they are clearly very effective (the transformation of the former conservative William Hague into a sopping wet liberal being perhaps their most stunning success).

The problem with all this is that the December 2015 Mr Johnson was quite right. Apart from that silly nonsense about the 70,000 members of the largely mythical Free Syrian Army, all his assertions were perfectly true. There never were more than a handful of “moderate rebels”. For evidence that this is so, witness the US Government’s recent rather pathetic attempts to practically beg the Russians not to strike Jabhat al-Nusra in case their “moderate” affiliates get hurt. And those moderate affiliates? They include Ahrar al-Sham and Jaish al-Islam, and if you harbour any delusions that these chaps are moderates in any shape way or form, you can divest yourself of the notion by simply Googling images of them and of Daesh, and then playing a fine game of spot the difference.

Why has the US administration been begging the Russians to do this? Because their goal has always been to topple the Syrian Government using Islamic jihadists to do it. For anyone who doubts this, there is abundant evidence out there, but I’ll give you just three points.

Firstly, General Wesley Clark revealed that back in 2001, the Pentagon had drawn up a list of countries that they intended to attack. Those countries were Iraq, Syria, Lebanon, Libya, Somalia, Sudan and, “finishing off, Iran.” You may recognise some of the countries on that list as having been the subject of attack or regime change.

Secondly, a WikiLeaks cable, “Influencing the SARG [Syrian government] in the End of 2006”, shows that in 2006, five years before the so-called “Arab Spring” protests in Syria, it was the policy of the US Government to bring about regime change in Syria. The author of the cable, William Roebuck, who was chargé d’affaires at the US embassy in Damascus at that time, wrote of the “potential threat to the regime from the increasing presence of transiting Islamist extremists,” and went on to speak of the “signals that the US Government can send that will improve the likelihood of such opportunities arising.” In other words, even then they were looking for ways to destabilise the country and overthrow the Syrian Government, using Islamist proxies. It is worth remembering that at that time, despite its many faults, Syria was a relatively peaceful and prosperous country where people of different religions coexisted and minority groups were protected.

Thirdly, I strongly urge doubters to watch the recent testimony of the Virginia Senator, Richard Black. He recently visited Syria to find out for himself what had happened, and what was happening. The accounts he heard over and over again were that initially peaceful protests – which were actually never aimed at toppling the Government – were quickly infiltrated by hardline Salafists carrying jihadist flags and weaponry that they simply could not have got hold of in Syria. In other words, they were paid mercenaries – the transiting Islamist extremists mentioned by William Roebuck – and they received their weapons from elsewhere – Benghazi in Libya primarily.

Back to Mr Johnson. Aside from his capitulation, there are a couple of questions he ought to be made to answer. He is now clearly on board with the US mantra that “Assad must go”, a mantra that has been their objective from 2001 – a decade before they first stirred up this conflict. The first question is this: What are you going to put in his place, Boris? Anyone who knows anything about this situation knows that Mr Assad’s toppling would see not a land flowing with milk, honey and democracy, but a land running with blood, sharia law, and the black flag of jihadists over Damascus. Sure, the US would then launch a full scale war to pose as the saviours of the situation they themselves deliberately created, but is this really what Mr Johnson wants? Assad or Islamists. There’s no third option.

But even more fundamental to this is a question that goes to the heart of our foreign policy. Imagine that Mr Assad came out with the statement that Theresa May must go. Not such a fanciful question since her mandate to govern has essentially been derived from a few hundred MPs in her own party, and it is highly doubtful that she commands anywhere near as much support from the population she governs as Mr Assad does from his. But if he said it, after we’d finished laughing, we’d probably ask the question, “What on earth does it have to do with you?”

So what’s it got to do with you, Mr Johnson? I was under the impression that you had just been appointed as the Foreign Secretary of the United Kingdom of Great Britain and Northern Ireland, and I’m not sure why you think the role should include telling other countries who should and shouldn’t be their leader.

The great irony here is that Mr Johnson has just campaigned successfully for Britain to pull out of the EU in order to regain her independence and sovereignty. That’s a fine thing. But you cannot believe in the principle of sovereignty for one nation and then discard it for others. Not unless you want to go around holding two mutually exclusive ideas in your head at the same time. Gives you quite a headache if you ever try to justify it to yourself.

Just as this country recently voted to have other countries butt out of our affairs, it really is time that we applied this principle of sovereignty to ourselves in relation to other countries. The history of the last couple of decades, where the US Government has sought to take out countries and governments deemed to be uncooperative and uncompliant, has witnessed gross violations of sovereignty time and time again. It has also devastated country after country, ruining the lives of countless people. Mr Johnson’s about face is just more of the same. He needs – and we as a country badly need – to rediscover the principle of state sovereignty, which we have recklessly abandoned.