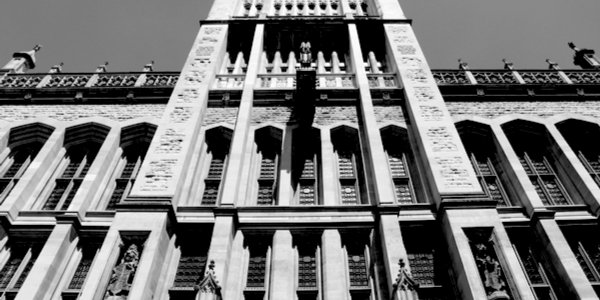 Guess what! You couldn’t make it up – except you could. The student panel which will advise the new university watchdog on free speech has appointed the delightful Mr Ben Hunt to join it.

If you don’t know who I am talking about, this is the free-minded chap from the King’s College London’s students’ union who campaigned to have former Archbishop of Canterbury Lord Carey’s picture erased from his alma mater’s wall of fame. Otherwise known as the Strand Gallery, here enlarged photos of the university’s most famous and revered alumni adorn the building’s Strand flank.

We reported on this not-so-enlightened young man on TCW just over a year ago. He was already notorious for his taste for censorship. At the height of the gay marriage debate in 2010, with his fellow LGBT student campaigners he had demanded the removal of Lord Carey for opposing this policy.

Ben Hunt condemned Carey’s views as ‘outdated, hurtful and offensive’, never minding that the university at which he had chosen to study was founded as a Christian institution, that Carey had graduated there in 1962 as a Bachelor of Divinity, and that it was acting on his Christian beliefs that he had tabled an amendment to the Marriage (Same Sex Couples) Bill in the House of Lords.

The university stood firm and by its enlightened free speech principles: ‘Lord Carey’s views are his own and offered as part of an open debate,’ a spokesman explained.

But Ben Hunt’s campaign to remove Lord Carey’s image did not stop.

By 2013, a new and more accommodating KCL principal, Ed Byrne, invited the students’ union to submit an alternative list of alumni to refresh the Strand Gallery. How thoughtful of him. Ben Hunt, still studying we must surmise, declared dictatorially that ‘the scheme will mean the removal of Lord Carey, and the inclusion of minorities in the discussions for new alumni’. Byrne agreed, at least indirectly, to students’ demands.

But two years later the allegedly homophobic ex-Archbishop was still there, traumatising students. LGBT activists were getting impatient and Ben Hunt was back knocking on Byrne’s door. Carey’s image was repeatedly defaced by graffiti.

This was 2016. A King’s spokesman stated that while there were no current plans to remove any figure, including Lord Carey, ‘our proposed redevelopment of The Strand campus is likely to require a review of the display of our alumni’. How convenient. And in due course the defaced Lord Carey disappeared. Nothing to do with the campaigners, of course.

‘Archbishop removed from wall five years after success of LGBT campaign,’ crowed Roar, the King’s students’ union newspaper. Professional student Ben Hunt, by now president of the union (a satisfactory sinecure for a bolshie student campaigner, wouldn’t you say?) said how proud he felt that the university had finally acted.

So now the not-so-young but permanent student (it seems) has been appointed to the Office for Students (will he get paid for that too?) the new and unnecessary quango set up by the naive Jo Johnson to crack down on universities that fail to safeguard free speech.

Oh, how you should be careful what you wish for. More likely it will be cracking down on those institutions that have the temerity to defend free speech.