Saturday’s vaccine protest – what the MSM won’t tell you 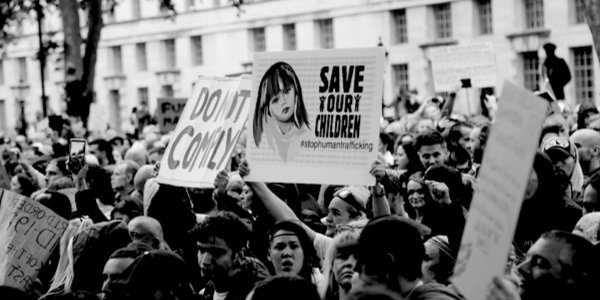 IT WAS all going so well. Thousands and thousands of indignant and outraged protesters marching to the fabulous Hope and Anchor Community Church drummers, red and white crosses on their t-shirts, behind a banner held by, among others, Laurence Fox and Martin Daubney of the Reclaim Party, saying ‘No to medical mandates, vaccine passports and medical fascism’. Attentive to gaps in the snaking procession heading from Hyde Park Corner to Clapham Common, hidden marshals kept the crowds of concerned families and individuals moving steadily together, stalked by more than a dozen police vans crammed with officers possibly disappointed at how pacific the disquieted demonstrators were.

People I spoke to, holding aloft messages saying ‘No to Vaccine Passports’ and ‘Healthy children don’t need a Covid vaccine’, were particularly concerned by the way the government were choosing to overrule parental authority and inject teenagers regardless of the consequences. Uncertain of whether the government were malign or misguided, many saw this as yet another example of the authorities seeking to coerce and control our behaviour, and were shocked at just how far the government is prepared to go to enforce its will. Some demonstrators felt at a loss as to what to do, but were buoyed up by coming together with thousands of like-minded folk, all determined to put an end to tyranny.

As people streamed across Clapham Common, the rallying point, to the pulse of Primal Scream’s Come Together, a message of peace and love rang out, and in the sunshine, those who were not lolling on the grass, joined the arms-aloft revellers swaying to Chic’s Good Times. As the sun set, some of the leading lights of the opposition to the UK’s coronavirus coercion plan took to the stage to reflect on the days of protest behind and ahead of us. Fi from A Stand in the Park praised the attendees. ‘They want to break us. They want to divide us, keep us separated, but we choose to stand strong together.’ Nacho from Stand Up X welcomed all the ‘freedom fighters who will not give up and will not be defeated’. ‘But,’ he continued, ‘the war is far from over. It was never going to be easy, but we are worthy of the challenge.’

But just as Jo Rogers from Lawyers For Liberty began her speech telling how she had been inspired to full-time resistance to the coronavirus measures when she saw police cracking heads on a peaceful protest exactly one year before, dozens of heavily armoured officers, some armed with truncheons, surrounded the lorry broadcasting the event, interrupting the speaker and forcing the show to end. Surging forward to confront the forces of law and order, the wave of discontented freedom-lovers teetered but fortunately did not break over the cavalier cops intent on showing they meant business. As a police liaison officer had told a friend of mine: ‘This event will end.’

There was no official explanation from the police – the organisers had agreed that there would be speeches and then 20 minutes more music and they would then leave.

It seems that arbitrarily (just after 6pm) the police had decided that this entirely peaceful event should now end, before the speeches had finished. It was a provocative show of strength – and they had just added six police vans, so they were ready to swamp the protest if it had turned nasty as a result.

I caught up with a somewhat disappointed Louise from Save Our Rights, who had been helping coordinate and promote the march, and had been due to speak after Jo. She had wanted to tell people ‘You don’t fight the system – you create what you want to have. You create the new reality. We created a joyous, fun-filled event here. We marched through the streets of London, we brought the message to so many people. But then we got here and we had freedom. And how do you get it? You live free.’

Videos of the march we had to show you and did for a short while included short interviews with Martin Daubenay of Reclaim, Alan Miller of Together, both of which YouTube has since seen fit to remove from our YouTube channel https://www.youtube.com/channel/UCSGQoKpTFC0pjEecM-VsOsg this morning. We will make these available elsewhere when we can. Laurence Fox, Dr Claire Craig, and Louise from Save our Rights have so far survived YouTube’s censors.