NewsPaperthe art of publishing
HomeNewsSavagery and shame: The fall of Singapore, February 1942
151

Savagery and shame: The fall of Singapore, February 1942 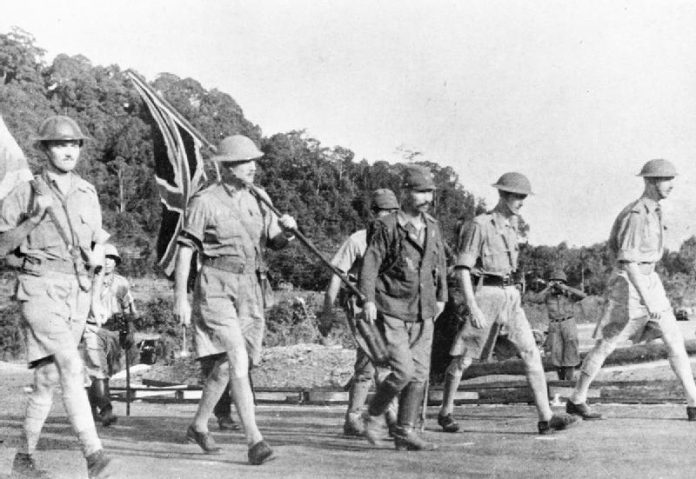 IT was one of the most shocking and humiliating images of the Second World War – British Army officers carrying a Union Jack and a white flag on their way to surrender Singapore to the Japanese.

This was the scene 80 years ago today on February 15, 1942, as the colonial Malayan island, held by Britain since 1819, fell to the onslaught of the warriors of the Rising Sun.

It followed a savage two-month campaign in which, despite being heavily outnumbered, the Japanese swept 600 miles down the Malay peninsula to capture Singapore, whose naval base was the vital pivot of our Far Eastern empire.

General Arthur Percival, commanding a force of around 80,000 Empire troops – British, Australian, Indian and Canadian – had been ordered by Prime Minister Winston Churchill to fight to the last man against the invaders.

But as the Japanese forces, numbering only 30,000, overran the island, the 54-year-old veteran of the Great War took the agonising decision to capitulate in an attempt to save lives.

On the evening of January 15, 1942, Percival and his entourage trudged to the island’s bombed-out Ford automobile factory, where he signed a document of unconditional surrender under the gaze of General Tomoyuki Yamashita, whose victory saw him dubbed ‘the Tiger of Malaya’.

The Japanese had landed in northern Malaya on December 8, 1941, simultaneously with their devastating carrier-borne aerial attack on the US Pacific fleet at Pearl Harbor in Hawaii.

After initial clashes, the Empire forces, without tanks, were soon in full retreat down the peninsula, being pushed southwards towards Singapore island.

The Japanese tactics took Percival and his officers completely by surprise. The attackers steamrollered swiftly through jungle and swamp that had been thought impenetrable, taking few military prisoners and slaughtering civilians. In places, they even advanced using bicycles.

The British had no answer to the relentless assault and were caught out again and again by Japanese pincer movements.

At sea, there was further disaster. On December 10, 1941, Japanese torpedo planes sank the battleship Prince of Wales and the cruiser Repulse, which Churchill had hurriedly dispatched to the Far East before war was declared to help defend Malaya. Prince of Wales lost 330 men, with 1,285 saved. The death toll on Repulse was 515, with 796 survivors.

As the Japanese advanced, the British blew up the 1,000-yard causeway connecting Singapore to the Malayan mainland over the Johore Strait.

But on February 8, some 23,000 enemy troops began crossing the narrow stretch of water in barges and assault boats. Despite resistance, they broke through to spread out over the island, aided by bombers and artillery.

In later years, a myth developed that a battery of powerful 15in guns on the island were fixed to fire out to sea because only a Japanese naval attack was anticipated. In fact, the huge artillery pieces were well able to traverse and fire over the land, and were used against the invaders.

However, they made little difference because they were supplied with armour-piercing shells for use against warships, whereas high-explosive rounds were needed to inflict damage on infantry.

Despite some gallant stands by the defenders, the situation rapidly deteriorated, with food, fuel and ammunition running low and water supplies threatened. The Japanese too were severely short of ammunition, but in an effective psychological ploy, General Yamashita sent messages to the British that resistance was futile.

On the morning of February 15, Percival received a telegram from his superior, General Archibald Wavell, who had left Singapore five days earlier, urging him to keep fighting as long as his troops were physically able. But he gave Percival permission to cease resistance when it was impossible to carry on.

Percival held a conference with his senior officers and they decided there were two choices: Stage a counter-attack to secure water and supplies, or surrender. Unaware of the growing weakness of the Japanese, the fateful decision was made and Singapore fell.

Churchill was staggered when the news reached him in London. He had ordered – and expected – a blood-filled, inspirational, glorious last stand. The Prime Minister called the military collapse ‘the greatest disaster and largest capitulation in British history’.

Eighty thousand Allied troops were marched into captivity to face years of hell at the hands of the Japanese. More than half never returned home. Thousands of civilians, especially Chinese, were murdered.

Apart from the human tragedy, the fall of Singapore marked the beginning of the end of the British Empire in the Far East and elsewhere. The idea that the white man was supreme was shattered by the stunning victory of an Asiatic race.

Who was to blame for the debacle? It’s a question so complex and controversial that even 80 years on it is fiercely debated, and certainly too wide-ranging to examine in this brief summary.

Some factors, though, are readily apparent. There was a complacent British attitude towards the Japanese. Singapore was thought impregnable and it was assumed Japan would attempt a seaborne attack because the jungle would be impassable. Some Empire troops were poorly trained and few had any knowledge of fighting in jungle terrain.

There was a failure to reinforce the defences of the northern landward coast of Singapore, where the Japanese broke through with their amphibious assault. Intelligence about the enemy was poor. The top brass woefully underestimated the skill and tenacity of the Japanese soldiers and the tactical and strategic competence of their commanders.  Percival was an uninspiring leader, not a fighting general, and there were serious blunders of command and communication.

A basic problem – perhaps the deciding factor – was that Malaya had been deprived of tanks, aircraft, warships and equipment because, with Western Europe under the Nazi jackboot and Russia fighting for its life, the campaign against Hitler took priority.

While the ordinary soldiers were taken from Singapore to slave labour in prisoner-of-war camps, Percival was kept prisoner in Manchuria alongside other important captives. They included US General Jonathan Wainwright, who had been forced by the Japanese to surrender the Philippines in May 1942.

In August 1945, as the war came to a close, both were freed by American forces and received special attention from General Douglas MacArthur, the US Far East commander. In March 1942, MacArthur had been ordered by President Roosevelt to quit the Philippines as they were overrun by Japan, leaving behind thousands of his troops – so he too knew the bitter taste of defeat and humiliation.

With this in mind, he invited Percival and Wainwright to stand behind him on September 2, 1945, as he sat at a table to take the unconditional surrender of the Japanese on the deck of the battleship Missouri in Tokyo Bay, formally ending the Second World War. MacArthur used several pens to sign the surrender document, then handed one each to Percival and Wainwright.

Percival returned to Britain in 1945 and made his report to his superiors on the loss of Singapore. He claimed the main reasons were defensive unpreparedness and underestimates of Japanese strength and military effectiveness. His conclusions were not well-received, possibly because they reflected badly on the political decision-makers in Whitehall and perhaps Churchill himself.

Whatever the reasons, Percival was indelibly tainted by the capitulation and retired from the Army in 1946 – the same year his nemesis in Singapore, General Yamashita, was hanged as a war criminal for atrocities committed in the Philippines.

Share
Facebook
Twitter
WhatsApp
Email
Previous articleWanted urgently: A leader who is good and true
Next articleWhy would Putin invade when Project Panic is working so well?