Selfless Kate proves herself worthy of our respect 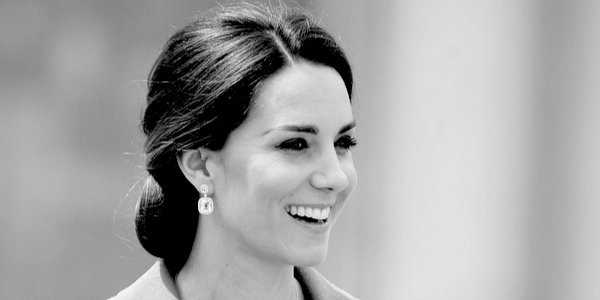 WHEN Harry and Meghan dramatically departed to start a new life in Canada, they left behind several unpleasant bones for the rest of us to pick over, among them a debate about whether they had been driven out principally because of racism within the British media. The Conservative Woman argued strongly against this notion.

As an offshoot of this confected racism row, a school of thought developed which claimed that the Duchess of Cambridge received nothing but positive headlines while Meghan, the outsider, was always criticised. Among the many comparisons were how the press treated their individual pregnancies and private jet usage.

Even if it is true that there has been a bias towards Kate Middleton, as she was, there are plenty of good reasons why this should be so.

Since marrying into the royal family nine years ago, the glamorous Duchess has always worked hard, showing a level of old-fashioned selflessness that goes with the job. As well as having three children, she represents the Queen in everything she does, and supports a select number of charities, providing an enormous boost to them simply with her presence. She has taken on many patronages that demonstrate her dedication to children’s causes, an area she has sought to make her own. These include Place2Be, for which she launched Children’s Mental Health Week yesterday, encouraging young people to ‘share their worries and ask for help’ in this ‘scary world’.

Recently she unveiled ‘5 Big Questions‘, a month-long landmark survey which she and the Royal Foundation, of which she is part, hope will help to improve the life chances of every child in the country. She has received both criticism and praise for this initiative, which is being conducted by Ipsos Mori. But there is no question that it highlights her interest in using her position to focus on the needs of young children and their families.

Judging by the way she carries herself, she seems to have understood instinctively what the responsibility of being a royal wife involves, and she has shown great commitment to it. Everybody knows that however glamorous her ‘job’ may appear to be, it is relentless, very often dull, requiring great self discipline – and possibly isolating, too. Despite this, she gets on with it in a solid and dependable way. She has clearly studied how to deal with the demands of the role and, one suspects, will have accepted the advice of, and learnt from, her ‘elders and betters’, the Queen and the Princess Royal. In the times when Kate has been shielded from view – first during her long courtship with Prince William, and secondly when they spent a few years as newlyweds on Anglesey – she will have benefited from observing and learning the expectations and pitfalls of her future role. It has stood her in good stead and it is no surprise that now, as a senior royal, she inspires Diana-style affection on tours and at events all over the world.

However, like Meghan, Kate’s relationship with the press has not always been straightforward, and she has certainly borne the brunt of negative headlines. When she was a royal girlfriend, some newspapers questioned her integrity (remember ‘Waity Katie’?) and the misdemeanours of her extended family, in particular her uncle, Gary Goldsmith, were dredged up with predictable frequency. There was plenty of criticism of and snobbery about her middle-class parents, whose business Party Pieces was widely mocked despite its financial success. At no time was there any complaint about the media, no statement via Prince William’s office, instead a dignified silence which seemed to accept the realities and the difficulties of the role.

Yet none of these barbs can have been easy for her and they came when she was only in her early twenties, before she agreed to marry  William. By contrast, when Meghan Markle appeared on the scene a couple of years ago as a mature and experienced woman she was treated with nothing but respect by the press. The irony of Kate staying put and Meghan fleeing is, therefore, glaring. Meghan enjoyed a hugely friendly and welcoming committee yet, evidently, this was not enough for her.

In recent months, there have been unsubstantiated rumours – none reported in the mainstream media – of difficulties between the Cambridges. Who can know the truth? Which couple does not after seven years have some tricky patches? In spite of this backdrop, the Duchess continues to show the steadfast dedication to public life that has made her popular. She has not let anything prevent her from doing her duty.

Unarguably, the role in which the Duchess of Cambridge has really thrived is that of being a mother. Her critics will, of course, suggest that privilege brings immediate access to help and expensive schools, but Kate has risen above these inevitable slurs by demonstrating her affection for and commitment to her three children. Unless occupied on royal duties, she – security in tow – collects them from school, and she recently made headlines after she cancelled an official engagement event at the eleventh hour, apparently because of a lack of childcare. There is something admirable, and wonderfully normal, about this.

On a practical level, the Duchess has provided heirs enough to secure the line of succession, and the Queen’s huge delight in this is clearly evident in the two happy photographs she had taken of herself shouldered by her direct heirs, the Prince of Wales, the Duke of Cambridge and the young Prince George. It is the most recent one, taken at Christmas, which is said to have made Prince Harry feel his role was becoming obsolete.

It is true that Meghan Markle sacrificed a career when she married into the royal family while Kate Middleton did not. It is also true that Kate may be a less forthright, and more compliant, character than Ms Markle. But being bland and restrained is exactly what being a member of the royal family is all about. A remarkable fact about the Queen is that we know nothing of her opinions about any substantial issue. The same is true of the Duchess of Cambridge and this will almost certainly always be so.

For as long as she remains a member of the royal family, the British monarchy is safe.