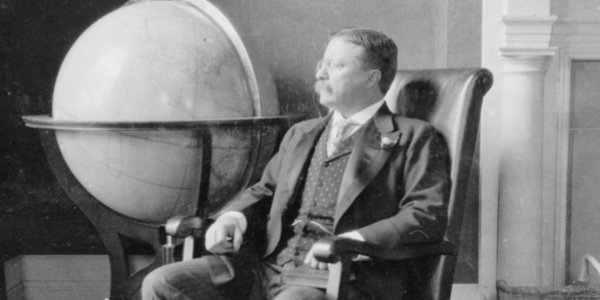 This is the second in our series of the best conservative speeches from the last century to the present day.

Theodore Roosevelt was the American Republican statesman and writer who served as the 26th President of the United States from 1901 to 1909. He was, and still is, the youngest American President. He was both a ‘conserver’ and a progressive, and a man who lived up to his robustly and determinedly masculine ‘cowboy’ image.

If ever proof of this were needed, it was the speech he delivered straight after a failed assassination attempt on him, remarkable for the fact he gave it at all. More remarkable speech-wise was his use of this dramatic opportunity to impress on his country the solemnity and earnestness of his cause.

However an even greater speech in terms of its thought, values and simply words, is the one he gave at the Sorbonne in 1910 on the subject of individual citizenship. These lines from it have indeed resonated over time, because he spoke a fundamental truth, and spoke it with poetry:

‘It is not the critic who counts; not the man who points out how the strong man stumbles, or where the doer of deeds could have done them better. The credit belongs to the man who is actually in the arena, whose face is marred by dust and sweat and blood; who strives valiantly; who errs, who comes short again and again, because there is no effort without error and shortcoming; but who does actually strive to do the deeds; who knows great enthusiasms, the great devotions; who spends himself in a worthy cause; who at the best knows in the end the triumph of high achievement, and who at the worst, if he fails, at least fails while daring greatly, so that his place shall never be with those cold and timid souls who neither know victory nor defeat.’

You can read the speech in full here.

This theme of duty of citizenship which he deemed so integral to democracy goes back a much earlier speech he gave in Buffalo in 1883. In the muddle that is today’s confused British values agenda, it worth reminding ourselves of Roosevelt’s words on what he believed to be the correct attitude of the citizen in civic life:

‘It ought to be axiomatic in this country that every man must devote a reasonable share of his time to doing his duty in the political life of the community. No man has a right to shirk his political duties under whatever plea of pleasure or business; and while such shirking may be pardoned in those of small means it is entirely unpardonable in those among whom it is most common – in the people whose circumstances give them freedom in the struggle for life.

‘Freedom is not a gift that tarries long in the hands of cowards: nor yet does it tarry long in the hands of the sluggard and the idler, in the hands of the man so much absorbed in the pursuit of pleasure or in the pursuit of gain, or so much wrapped up in his own easy home life as to be unable to take his part in the rough struggle with his fellow men for political supremacy. If freedom is worth having, if the right of self-government is a valuable right, then the one and the other must be retained exactly as our forefathers acquired them, by labor, and especially by labor in organization, that is in combination with our fellows who have the same interests and the same principles.’

There is no thought without language. These words above explain what life, liberty and the pursuit of happiness really mean.