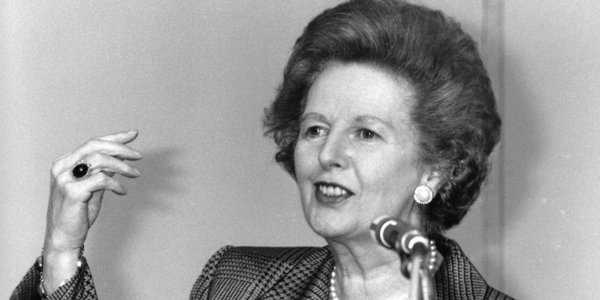 This is the fifth in our series of the best conservative speeches from the last century to the present day.

Like Churchill, Margaret Thatcher was not a born communicator. She too had to work on it. She learnt to lower her vocal pitch and she worked on her timing. Like him, she understood that the language of truth is simple.

As with any great speaker it was the sheer force of her personality that counted – courageous or foolhardy, it won her the conflict with Argentina over the Falklands and the battle at home against the miners. Modernity passed her by as she won three elections in a row by rejecting the Leftist politics of consensus, by educating both the Conservative Party and the voters in her values.

She set her own traditional and moral tone from the moment she entered Downing Street with words from St Francis of Assisi:

Her power lay in her cast-iron conservative principles and her certainty that socialism was wrong: ‘I never had any doubt that socialism was a harmful creed nor that the surest bulwarks against it were individuals prepared to shoulder responsibility, strong families, religious faith and a local community with a deep sense of civic values. This was the background against which I grew up, and my political opinions flowed from it.’

Time and again it informed her speeches in Parliament, at party conferences and to the world. It is hard to choose the greatest. Her 1980 Conservative Party Conference speech where she explains her mission is to change ‘the national attitude of mind’ (no less) stands out. It was here that she said, to roars of approval, ‘The lady’s not for turning’.

But I have to choose the one that was simply remarkable for being made at all, just twelve hours after the bombing at the Brighton party conference which was intended to kill her and left colleagues dead and injured. ‘Shocked but composed and determined’, she went ahead.

You can listen to it here:

or read it here.

As a testament to her fortitude, as an attack on those who would destroy democracy, it stands as her greatest speech – and one of the greatest conservative speeches ever.

Share
Facebook
Twitter
WhatsApp
Email
Previous articleDriven crazy by the D-word
Next articleSleeping with the enemy – the police, the tree-huggers and a gross abuse of power