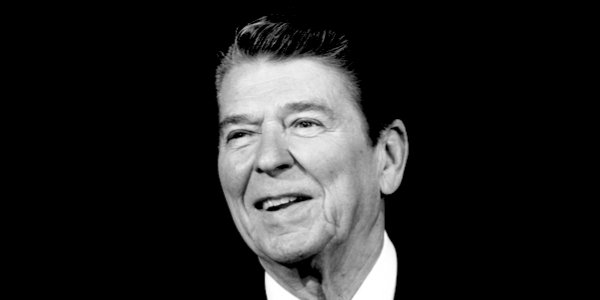 This is the sixth in our series of the best conservative speeches from the last century to the present day.

Ronald Wilson Reagan, the bit-part actor from Hollywood who came to be dubbed The Great Communicator in recognition of his oratorical skills, served as the 40th President of the United States from 1981 to 1989.

He shot to national political prominence with a speech he made in 1964 in support of Barry Goldwater’s foundering presidential campaign. A Time for Choosing launched Reagan’s political career, though Goldwater lost by one of the biggest margins in history.

It set out his uncompromising political stance and ideology. It did not lack for metaphor, and the message was all the more powerful for it.

‘The Founding Fathers knew a government can’t control the economy without controlling people. And they knew when a government sets out to do that, it must use force and coercion to achieve its purpose. So we have come to a time for choosing.

‘You and I are told we must choose between a left or right, but I suggest there is no such thing as a left or right. There is only an up or down. Up to man’s age-old dream – the maximum of individual freedom consistent with law and order – or down to the ant heap of totalitarianism.’

As one his biographers later explained, ‘Ronald Reagan was transformed into a superb actor when he took on the roles of governor of California, presidential candidate and President of the US. Then, as never in his movies, he became authoritative, authentic, irresistible to eye and ear.’

His next great performance came at the Republican National Convention in 1976, when Gerald Ford took the unusual step of inviting him, the losing nominee, to the podium to speak. Reagan, in one of the greatest ad libs ever, stole his rival’s thunder and made the delegates regret their choice. You can see why here.

His own inauguration he made memorable for the words: ‘In the present crisis, government is not the solution to our problem; government is the problem.’

Reagan initially suffered at the bad-mannered hands of the Brits – just as Donald Trump suffers now. Many on the Left chose to sneer, deride and even refuse to meet him. Harold Wilson as prime minister declined to see the former governor of California and soon-to-be President of the US. Mrs Thatcher greeted him, however, with Winston Churchill at her side: that is ‘little Winston’, as his grandfather called him.

She was the first world leader to visit Reagan, in Washington, after he became President, sealing their special relationship thus: ‘Your problems will be our problems . . . and when you look for friends we will be there.’

For all of Reagan’s eight years at the White House, Mrs Thatcher was at Number 10. Together they refashioned the political landscape of the western world, rejuvenating the conservative philosophy. They stood in steadfast opposition to the prevailing socialist and collectivist philosophy they’d inherited, and of course to Soviet aggression.

Some think that it was at the Bergen-Belsen concentration camp in 1985 that Ronald Reagan delivered the supreme speech of his presidency.

which you can also read here.

Yet the end of the Cold War would not have come to pass without Reagan and Thatcher’s resolute leadership on behalf of the anti-communist nations. This is why I have to choose above all Reagan’s 1987 speech in Berlin, demanding: ‘Mr Gorbachev, tear down this wall!’ It was very far from ad lib. Like Churchill’s greatest speeches it had huge time and energy expended on it, of which the main author has since written.

It is astonishing to realise that Ronald Reagan and John F Kennedy were members of the same generation and that a mere six years separated their births. Both men went to Berlin. Kennedy to tell the world that he was proud to call himself a Berliner (or that infamous jelly doughnut, depending on your translator) in the face of Soviet military threats; Reagan, by contrast, to tug at a faded, fraying Iron Curtain and to challenge Mikhail Gorbachev to tear down that wall, which you can see here.

I have no doubt as to who was the more honourable man and the greater speaker.