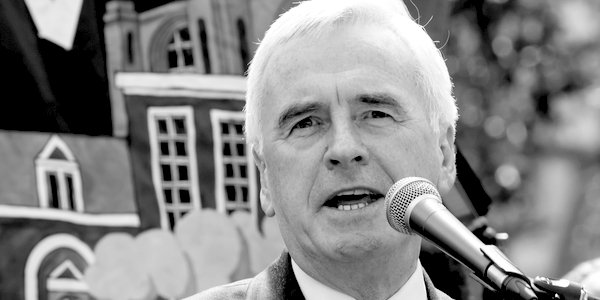 John McDonnell and Jeremy Corbyn are masters of doublethink. They promote peace and disarmament, except when war and murder are practised by the IRA, Iran or Palestinian thugs.

It is in this context that McDonnell’s proposals for popular share ownership should be considered. Of course, the Conservatives got there first with the great privatisations of the 1980s, but that was the ‘wrong’ kind of share ownership, according to the comrades. It was undeniably popular in both senses.

Instead, McDonnell states that every company with more than 250 employees should give 10 per cent of the company’s shares to the employees. Except the shares would never be given to the employees. There’s doublethink at work here.

Traditionally, when someone is given something, they own it and they are able to dispose of it however they see fit. In the normal world, some employees receiving company shares would simply sell them and spend the money on whatever they want, such the latest iteration of the Sony PlayStation to give to their children for Christmas.

But this is Marxism, where giving and not giving are one and the same. Marxists do not trust individuals, which is why Marxists, when in power, go out of their way to murder anyone who shows signs of individualism, or encourage them to leave the country. The shares are not going to be given to the employee. Instead they are to be taken by a state-mandated committee. The committee will distribute up to £500 of any share dividend to each employee. The technical term for this state-appropriated cash is a ‘bribe’. The state committee will keep the rest and pass it back to McDonnell’s treasury. This is a back-door corporation tax. Sorry, kids, no PlayStation from Santa . . .

The shares themselves represent voting rights on the direction of the company. The state committee, we can but hope, will ballot the employees on how it should vote. Or perhaps there will be a show of hands at a meeting. Marxists are adept at taking control of committees, by packing them with fellow travellers, or holding a succession of meetings at unsociable hours, or making them drag on until only the true believers remain to cast their votes after ordinary mortals have become too exhausted to continue. The low turnouts at union ballots are an indicator of this. Union leaders such as Len McCluskey have been elected and propositions for strike action have been passed by a small proportion of those qualified to vote.

The main concern should be that the principle would have been established that the state can and will appropriate shares in any company for reasons of ideology. The size of the company and the percentage could all be varied once the state has its jackboot firmly in the door. At present the idea is that the percentage of shares ‘owned’ by employees would start at 1 per cent in the first year, being increased by 1 per cent every year. But there is no guarantee that this increase would stop after ten years or that the increase would be only 1 per cent a year. The current figure is a firm with more than 250 employees, but that could be reduced. There are no safeguards apart from John McDonnell’s personal promise. He is the man whose ideologically-motivated actions to wreck the Greater London Council’s budget in the mid-1980s were seen as too extreme even by political soulmate Ken Livingstone, who sacked him.

It’s a classic bait-and-switch. The mark is baited by an attractive prospect so they will sign on the dotted line or, in this case, put their cross in the right box (well, ‘left’ box). Once the mark has been hooked, the switch takes place to whatever the baiter wanted. Yes, some people will vote for a greater say in the running of the company that employs them, but the switch will be that this state-mandated say will always be in the hands of a state committee. A cross for Labour will be a cross we will all have to bear.

This is not so much Marxism-by-the-back-door as Marxism-kicking-down-your-front-door-and-taking-the-silverware. Make sure you have prepared your suitcase. You don’t need doublethink to do it.