NewsPaperthe art of publishing
HomeNewsSharia law at Speakers’ Corner as Christian critic of Muslims is removed...
1 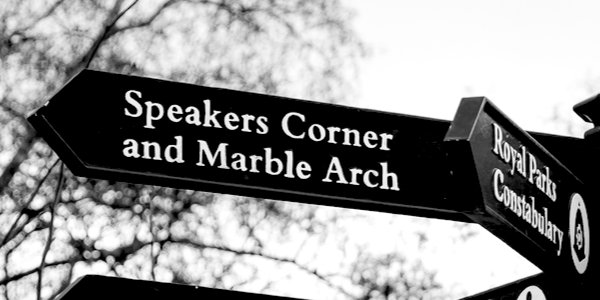 A BBC article describes it as ‘the home of free speech.’ The history of the place stretches back to an Act of Parliament in 1872 which sets aside this part of Hyde Park for public speaking.

The list of those known to have spoken there includes Karl Marx, Vladimir Lenin, George Orwell, George Bernard Shaw, Winston Churchill, Billy Graham, Lord Soper, and Tony Benn. Anyone can turn up unannounced and speak on almost any topic they like, though they may well have to cope with heckling.

Speaker’s Corner has long been a favourite location for street preachers. The BBC article notes that ‘at least half the speakers are preachers’, but also comments that in recent years ‘at least as many of the preachers are Muslim as Christian’.

I have been there for a Sunday afternoon and seen how the place is now dominated by Muslims, but with some brave Christians holding forth.

Video footage will show that it is a highly combative environment with accusations and insults being thrown all over the place, and where strength of voice can be almost as important as strength of argument.

Nevertheless, when I went, I was impressed with the high quality of debate between Christians and Muslims that goes on there. You need to be very well-informed to be able to hold your own in the discussions.

One of the bravest of the Christian preachers is Hatun Tash. I have seen her in action and she is incredibly well-informed on Islamic apologetics and an expert in engaging in the cut-and-thrust debate that occurs there.

In spite of being a relatively short woman, she commands a strong presence and is not intimidated by crowds of mostly men who heckle her and surround her.

Hatun was physically assaulted at Speakers’ Corner in July. In a YouTube discussion with David Wood, she revealed that in August, police warned her that they believe some Muslims intend to kill her and that therefore it is dangerous for her to go to Speakers’ Corner.

But Hatun is not intimidated. She wants Muslims to hear what she has to say. She believes Muslims are making threats in order to get the police to stop her from preaching because she is so effective. She has seen many Muslims convert to Christianity through her remarkable ministry.

On Sunday September 13, Hatun was escorted out of Speakers’ Corner by police for her own safety. You can watch the full video footage here. She was told that if she returned there she would be arrested.

This raises many questions about the home of free speech. It appears the police believe it is no longer safe for Christians to critique Islam there. The police were prepared to step in and remove Hatun and prevent her from sharing the gospel there. Where next for free speech in this world-famous location?

There is no doubt that Hatun was being provocative. That is her style. To be quite honest, if you are not provocative at Speakers’ Corner, then no one will bother listening to you.

Those who go there expect provocative things to be said and done. That is the nature of the place. Muslims are routinely provocative in their criticism of Christianity at Speakers’ Corner, as is their right.

With the help of others, Hatun has taken 26 different Arabic Qur’ans to Speakers’ Corner and explained that they are all different. This point is very disturbing to Muslims, who have been taught that the Qur’an is eternal and unchangeable and perfectly preserved.

Muslim leaders were so alarmed by this display that you can see them in the video calling other Muslims to come away because they didn’t want them to hear or see this material, against which they had no answer.

Textual criticism of the Qur’an is now a rapidly developing field of study and the Islamic world is struggling to know how to respond to evidence of multiple different Qur’ans. A leading Muslim apologist shocked the Islamic world when he recently admitted that there are real issues, and stated that ‘the standard narrative has holes in it’.

To remind Muslims of this issue, Hatun was using the visual aid of a large Qur’an with holes drilled through it. Provocative to be sure, but not outside the bounds of free speech – and certainly not at Speakers’ Corner.

Holes in any other book would have been seen as fair game. Hatun has seen at least one Muslim convert to Christianity following a conversation provoked by this visual aid.

She also had copies of the cartoons of Muhammad, printed by the French satirical magazine Charlie Hebdo, which resulted in a Muslim terrorist attack in 2015 that left 12 dead, including several of the magazine’s journalists.

Millions, including 40 world leaders, marched across Paris in displays of solidarity at the time. The trial of the suspected terrorists began in Paris this month. Hatun used the cartoons to show how dangerous Muhammad’s teaching is. Once again, cartoons are clearly within the bounds of free speech.

At Speakers’ Corner, as sunset approached, a Muslim snatched Hatun’s holey Qur’an from her and ran off with it. Two of her Christian friends were punched trying to recover it. Shortly after this, the police intervened.

The police action effectively enforced sharia law at Speakers’ Corner. They acted to protect Islam from criticism. Ostensibly they were merely acting to protect a brave but vulnerable woman – but their action also served to silence her.

It should have been those making threats who were removed, not Hatun. The result was that a Christian preacher was silenced by police in the home of free speech.

Ever since the violence and threats surrounding the publication of The Satanic Verses in 1989, when a fatwa was issued against author Salman Rushdie, there has been a measure of self-censorship in our society when it comes to criticism of Islam.

This time, the censorship was enforced. Muslims at Speakers’ Corner are effectively imposing a ‘heckler’s veto’ – threats of violence to silence arguments they can’t deal with.

Muslims there now know that if they get angry enough and start threatening a Christian preacher, then the police will step in and remove the preacher. When threats are rewarded with censure of the person being threatened, this can only serve to encourage more threats.

Share
Facebook
Twitter
WhatsApp
Email
Previous articleCatholics should trust Trump, not ‘azzacatholic’ Biden
Next articleAs the Swiss roll over to the EU, don’t sell our soul to Brussels