Should May resign? Yes! Now! say our readers

If there were ever any doubt as to our readers’ judgment on Theresa May’s prime ministership, there is no longer. You voted overwhelmingly for her to resign now in the best interests of the country. 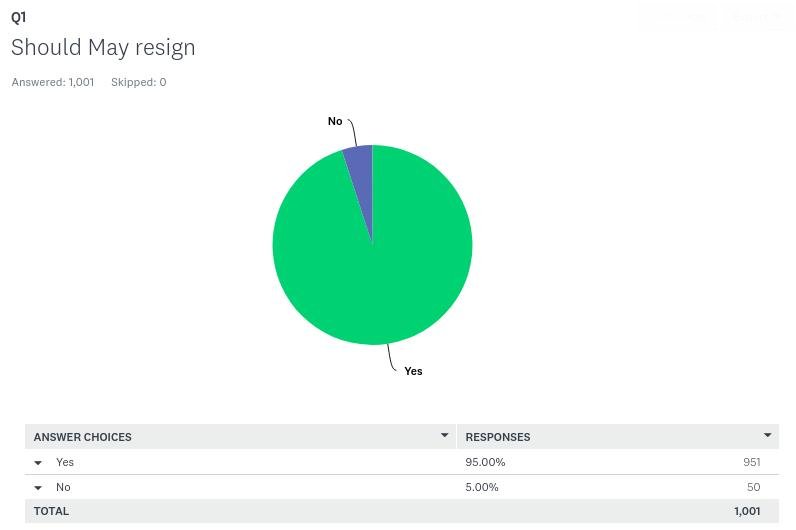 Of the 5 per cent who said ‘Stay’, the only defence given – if you could call it that – is that she is not the only problem:

I only wish removing Mrs May were some sort of panacea, but the problems run far deeper.

As Peter Hitchens said: ‘If the Conservative Party were your refrigerator, all your food would go bad. If it were your car or bicycle, you would be stranded by the side of the road. If it were your accountant, you would be bankrupt. If it were your lawyer, you would be in prison. If any consumer good, service or profession so consistently and predictably disappointed or failed in its ostensible main purpose, people would turn their backs on it. It would be overtaken, replaced and driven out of business by a better competitor.’

The whole thing is rotten. Controlled by hedge fund money and a bizarre fusion of authoritarian libertarians, who are permanently wedded to the economics of Margaret Thatcher but care nothing for culture, for faith, for family or for nationality, and will use the long arm of the state to crush those who dissent.

Changing Mrs May will simply result in some new City stooge who thinks the only worthwhile objective for a nation is to grow its GDP.

Overall, however, the message is that Mrs May is unique in her incompetence. And not just for her catastrophic failure to handle Brexit (whether down to political fudge or direct duplicity):

One of the criticisms made of Gordon Brown’s time as prime minister was that he had spent years plotting to get the top post but once he achieved power he appeared to lack any plans as to what to do with it. However, when forced by events to make decisions Brown could do so, as he showed during the crisis affecting the world’s financial system.

If Theresa May had been prime minister then and, by some miracle, had remained in power ever since, she would still be trying to decide what to do about Northern Rock, the Royal Bank of Scotland and all the other banks that had run into trouble.

Much as the Tory Party has lost its way, readers singled out Mrs May as being a person of no integrity or credibility. Many feel she has lied:

Whatever one might think of Anna Soubry at least she has been upfront.

By yesterday morning the chorus of ‘She should go, now’, ‘Of course she should go’, ‘ Give it up, dear. For all our sakes’ was reaching fever pitch.

No wonder. In a move that you’d have thought Mrs May and Ollie Robbins would have learnt to predict by now, Michel Barnier poured cold water on her latest ‘backstop’ wheeze. It had been successful in one thing only – perhaps exactly what was intended – stopping David Davis from resigning. That is why it is hard not to agree with this comment:

It is increasingly difficult to believe that we are where we are through sheer ineptitude rather than deliberate strategy. However, it matters not because either way she now cannot deliver on her manifesto promise over Brexit which means all those who trusted her on that have been badly let down. She won’t go but she clearly can’t stay unless the complete destruction of the Conservative Party is part of the plan so she will have to be pushed. For God’s sake and that of the country will somebody in the Party please get on and just do it!

She may be able to take the humiliation, but the country can’t. She should no longer be allowed to delude herself. As well as being the death of her party she’ll be the death of the country.