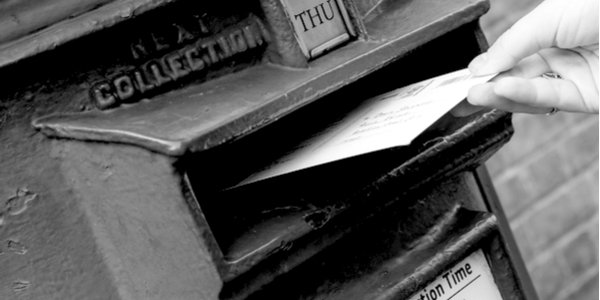 The postal system has been rubbish recently. Ever since they announced Brexit! This round robin letter has only just come through from my Left-wing friends . . .

Well, what a year it’s been for the Humblebrags. We came through it all – despite Brexit.

Daisy, our youngest, won a prize for her essay on tearing down the seats of privilege. She’s now left Roedean and is headed for Oxford, where she’ll be studying Philosophy, Politics and Economics. Did you know that the PPE course is known as ‘the fast track to Davos’? No, neither did we! Pure coincidence. Daisy just thought it sounded fun.

Elitists? Us? Au contraire! It ain’t that long ago that Les H’umblebrags were getting off the boat at Hastings with barely ten francs to rub together. Luckily, our ancestor Monsieur Bayeux had the presence of mind to start a tapestry business. Through sheer hard work he got in at the start of a new media boom as wall-mounted woven pictures went viral. Actually, though, he made his real money with a property database. Yes, we’ve lived comfortably off the earnings of that Domesday Book ever since. But, as my lovely niece Imogen said at Christmas: ‘Don’t be ashamed of your houses, Auntie. That’s what the Alt Right wants you to think. Living well is the best revenge against the bloody Tories.’ Such wise words for an eight-year-old. I felt so humbled. And proud enough to include it in this round robin for mass distribution.

I’m so looking forward to the day when Daisy appears on Any Questions and answers one of the racism-tainted questions with the classic statement answer: ‘When my ancestors first came to this country . . .’ The fact that it was in 1066 is neither here nor there.

Talking of disruptive media, our son Jeremy wrote a joke for the Newsjack programme on Radio 4. Or rather, his computer app did. I’m so, so proud. It was entirely his own work, apart from a few little tweaks from some marketing experts at dad’s firm and a bit of coding from the Indian outsourcers.

The app, the Comedy Bot, automatically writes jokes for BBC satire shows. It mixes the variables of the day’s news with the staples of BBC satire: World War 2, America and tabloid newspapers. As BBC script editors chant before each script meeting: ‘In the name of the Fuhrer, the Trump and the Daily Mail’.

April saw Jeremy take his ComBot on to Dragons’ Den. This opening monologue blew the judges away. ‘Any Americans in here tonight? That Donald Trump’s a bit racist isn’t he? Imagine if he phoned up Nigel Farage and put on a voice like Darth Vader!!! Hur hur. And imagine if Nigel Farage talked back to him – in a voice like Hitler!!! The Daily Mail would go mental [INSERT CANNED LAUGHTER].’

Peter Jones said it was like Marcus Brigstocke at his edgiest. Hitler! The Daily Mail! Darth Vader! It’s all so brilliant and innovative.

Jeremy is learning so much at the BBC. He’s already got the ear of the Director of Cosy Content, who gave him this advice: ‘If the scariest thing in your life is a mid-market newspaper bought by 3 per cent of the population, you’re not getting out much. And that’s how we like our audience to be.’

Talking of Auntie Beeb, our oldest Poppy has got her feet under the desks there. Following in her mum’s footsteps, I hear you say! Well, OK, I did pull a few strings.

Poppy is currently the Product Placement Executive on BBC documentaries. Every time you see a lingering shot of the lead investigator’s MacBook on a documentary, that’s Poppy’s work. The best thing is it’s all paid in cash to keep it off the books.

Finally, one of my clients is up for a GRAFTA award. Oh come on, don’t pretend you’ve never heard of them. The Political Showbiz awards?

The nominations for Best Supplanting Actor include some pretty stiff opposition. Whisper it, but Theresa May is a strong contender for Misdirecting Brexit. Then there’s Philip Hammond and Nick Clegg to worry about too. But all the same, I’m pretty confident my client will win and I’ve been busy drafting his speech. (For confidentiality reasons I can’t name him. If you hear the phrase: ‘I wasn’t expecting this, but I’ll say a few words off the top of my head’ – that’s my client!

A bit of insider gossip here: The category Best Projectionist includes such masters of psychological projection as Owen Jones, Paul Mason and James O’Brien. But this year, it’ll be a woman. I can’t say who but here’s a hint. If you’re booking an after-dinner celebrity speaker, I’d get Cathy Newman now if I were you. Her price is about to go up.

So, what you’re saying is that Cathy Newman is my client? Not arf!

Happy New Year. But not for the leavers. Let’s hope Brexit is proved to be a disaster and the country goes into recession. I did say this would happen, didn’t I? IMHO.