NewsPaperthe art of publishing
HomeNewsSnooker, the last sport of gentlemen?
91

Snooker, the last sport of gentlemen? 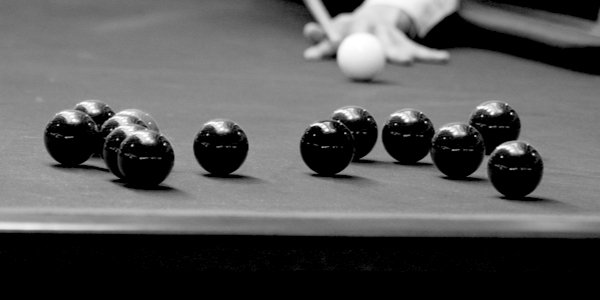 HALFWAY through this year’s snooker world championships something struck me – that in contrast to the virtue-signalling circus that has become the Premier League, pundits and presenters at Sheffield’s Crucible Theatre were making no mention of war, injustice or death. For a while I found myself transported back to old normal England.

The last time I watched the majority of the tournament I was 18 years old and participating, of all things, in a clinical trial for a company called Phase One. In between eating one of the mandatory five meals a day, luxuriating in long hot baths, and providing the occasional urine and blood sample to help monitor the absorption rate of a painkiller for arthritis (or so I was told), I spent the bulk of my two-week stay on the unit holed up in my comfortable room watching snooker, a relaxing mini-break for which I received £2,000.

Fast forward to 2022, and it is now acceptable practice to forcibly conduct national-scale clinical trials on a bullied populace, who are not only not paid for their services, but must themselves actually pay the State to participate, using the currency of dignity, independence, injury, and in many cases death. Snooker however has largely, and mercifully, remained much the same.

This is in stark contrast to Premier League football, in which it seems almost every match must be tainted with either a minute’s silence pre-kick-off, or a sustained round of applause mid-game to commemorate the death of a local adolescent cancer victim, an ex-player, a youth recruitment officer for the club, or more recently the death of Cristiano Ronaldo’s son at birth. Cristiano and partner Georgina’s loss notwithstanding, need every single football-related death (other than those players victims of the jab, of course) require tribute paid?

In addition to the League’s newfound obsession with the Reaper’s handiwork we have the infantile taking of the knee to combat racism – a ludicrous display of wokery that over the course of this season has morphed sneakily from being a show of solidarity with the Black Lives Matter campaign to one commentators now say encompasses social injustice of ALL kinds. Ironically, Crystal Palace’s Ivory Coast national Wilfried Zaha is one of the only players who refuses to comply, calling it degrading.

Then of course we have Match of the Day’s in-house GP Dr Gary Lineker and his esteemed colleague, Professor of Immunology Alan Shearer, embarrassingly vocal pro-Covid-narrative fanatics unafraid self-righteously to voice other of their moral allegiances live on air. Lineker in particular appears to enjoy ruining a show with his sombre death announcements, or occasional mentions of the war in Ukraine.

The BBC’s snooker coverage on the other hand is refreshingly focused for the official propagandist tannoy system of the state, in the sense that it covers snooker, and snooker only. Yes they are attempting to sauce up the sport with Madison Square Garden boxing-style competitor introductions, and siren presenters such as Seema Jaswal, but pundits Virgo, Parrott, Taylor, Davis, Doherty, Hendry et al sensibly concern themselves only with the game, not the many guises of death. For now at least, and aside from the odd conspicuous face mask among the audience, the viewing experience can be reminiscent of more honest times.

While their Premier League counterparts theatrically fling themselves to the ground at every opportunity in an attempt to con the referee, snooker’s elite sportingly admit fouls themselves. With schoolmarmish female referees such as Bulgarian Desislava Bozhilova, and stern-faced Belarusian Tatiana Woollaston overseeing proceedings, who could blame them?

The paradox is that unlike the decorous game of snooker, the Premier League’s jejune suite of virtue-signalling techniques, from taking the knee, to the laying of wreaths, to the wearing of black armbands (what next, halftime prayers? Pallbearers carrying out match balls in a yellow and blue coffin?) in no way reflect the behavioural reality of the government who, for example, designated a measly pre-existing wall in Westminster as the nation’s memorial to the victims of Covid-19, upon which the public may graffiti their grief. Hardly a tribute commensurate with the much bungled, most devastating period in the nation’s history, is it? What sort of unsightly monument may we expect to mark the next national crisis – a pedestrian subway inside which the public may mournfully urinate, and drop crisp packets in memory of the deceased?

This, of course, alongside the government’s vaccine injury scheme that refuses to pay out, and the fact that NHS staff have now returned to paying to park at their own places of work. Heroes indeed. The only knees ministers take are behind closed doors as they collapse laughing at how easily our morals are manipulated.

At present snooker is about as British as post-pandemic Britain gets. The everyday-man masters of this historically gentlemanly sport may be mostly overweight, and look like they’d be more at home at a Beefeater restaurant, yet compared to the mannequin-physiqued, metrosexual automatons of English football they are leagues ahead when it comes to conducting themselves with a polite dignity – once a trademark British quality, apparently. It’s only the unpredictable Ronnie O’Sullivan who occasionally sullies the Crucible atmosphere when he takes it upon himself to scold anyone in his line of vision who dares twitch a limb, and he doesn’t half make a fool of himself when he does so, so civilised are virtually all other competitors. (Last night O’Sullivan won the title to equal Stephen Hendry’s record seven.)

They say that snooker is chess with balls. The sport certainly appears to have a good deal of the latter when it comes to sticking to what it knows best. For the time being at least.