NewsPaperthe art of publishing
HomeCulture WarsSo this is what feminist brainwashing has brought us to … women screaming...
0 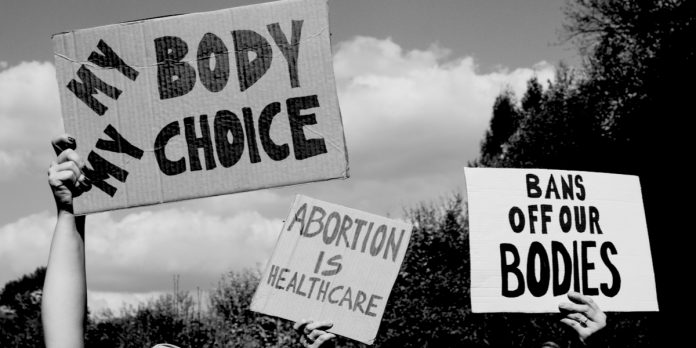 I’VE been pondering the public reaction to the US Supreme Court ruling on the Roe v Wade abortion issue and what it tells us about our civilisation.

The judges who defended the country’s constitution by overturning one of the worst examples of judicial overreach in US history and returning abortion decisions ‘to the people and their elected representatives’ find themselves subject to physical and verbal threats, character defamation and racial slurs from Leftist intellectuals and elected representatives alike.

Young women were predominant in heeding Alexandria Ocasio-Cortez’s bullhorn call ‘into the streets’  to defend the rights of all ‘birthing people’ to abortion. This ‘defence’ entailed riot, wanton attacking of public property, and baying for blood.

One of the most obvious symptoms of a society in decay is a lack of respect for law and order and a rise in public tolerance of perversion. The grotesque frenzy of howling, twerking, tattooed bodies screaming for death is shameful to behold – emblematic of a people fallen so far that one wonders how there can be any redemption.

Most of the hyper-enraged, fulminating protesters are very young, though not all. The puppet mistresses, Maxine Waters and Nancy Pelosi, are well beyond any worries about unwanted conception – yet they use this legal corrective to stir up hate and encourage the mob.

Elizabeth Warren, she of the ersatz Native American heritage and a law professor in another life,  called on the federal government to set up Planned Parenthood abortion ‘tents’ on federal land in Republican-led states. A more incendiary act is difficult to imagine. Dismissing the Supreme Court as ‘illegitimate’, she wants it ‘packed’ with ‘liberal’ appointees.

We are in strange days when people who previously could not define what a woman is, or even utter the word in public, elevate ‘women’s rights to abortion’ as the most important freedom in the land.

A government that has, and is still, committed to mass assault by forced inoculation now would have us believe that it cares about individual rights, privacy, and bodily autonomy.

These protesters screaming, ‘my body, my choice’ are the same people who would have you forcibly Covid-jabbed. Now they are urging ‘womb-havers’ to take part in a sex strike – to withhold sex from penises’. The contradictions are plain to see.

This is mass insanity and it poses a grave threat, not just to the unborn, but to all others judged a burden to our collectivist needs. Make no mistake, those whose existence offends our elitist masters, be they the elderly, the infirm, or the non-compliant, will suffer the wrath of the ‘progressives’ – scapegoated and eradicated– to suit the plans of the New World Order.

The tin gods of Davos and the billionaires who finance them, including Bill Gates, David Rockefeller Jr and George Soros, must be delighted by the legions of the untermensch eager to sacrifice their fertility, achieving their dark eugenicist aims for them.

History tells us that the sacrifice of the individual for the ‘good of the many’ is a pillar of totalitarianism, a tool for elitists to determine who lives and who dies.

These protesters are the product of brainwashing by educationalists, the media and politicians who would trample on our freedoms and moral values to the point where we accept that annihilation by abortion is a reasonable, indeed laudable, pursuit.

Ancient tribes were prone to sacrificing their children, often in times of extreme social or environmental disruption. The Carthaginians and Phoenicians in Sicily, Sardinia, and Malta made offerings to satiate their gods.

Dr Josephine Quinn, of Oxford University’s Faculty of Classics, writing in the journal Antiquity, theorises ‘perhaps it was out of … a sense that the good the sacrifice could bring the family or community as a whole outweighed the life of the child’.

The Incas murdered children to appease their particular gods, but importantly, DNA analysis shows that those slain were not the offspring of the ruling elites. The logic of power throughout millennia is consistent – why sacrifice your own progeny when a proxy of a lesser social class could serve your purpose?

In Ancient Greece, babies who were unhealthy, deformed, the wrong sex, or simply ‘inconvenient’ were often killed at birth or ‘exposed’ – left out in the open to die. Aristotle counselled: ‘Let there be a law that no deformed child shall live.’

Christianity explicitly rejects abortion and infanticide. The Epistle of Barnabas says: ‘Thou shalt not kill a child by abortion, neither shalt thou slay it when born.’

Despite the clear prohibition, the Irish historian William E H Lecky records that during and after the Middle Ages, both acts took place on a gigantic scale and were considered ‘a very venial offence’.

Before the Second World War in nominally Christian Germany, doctors and nurses ‘euthanised’ thousands of babies and children with physical or mental defects, putting so-called ‘useless eaters’ to death to ‘purify’ the nation’s bloodlines.

The Nazis murdered some 1.5million children, mostly Jewish. In the concentration camps, children were used for medical experimentation, most notably by Dr Josef Mengele. His ‘work,’ together with that of other convicted Nazi doctors, prompted the 1947 Nuremberg Code – the ethical medical research principles so sorely abused with impunity these past two years.

The most extreme example of modern planned child destruction took place under the Chinese Communist Party’s ‘one -child policy’ (1980 to 2016), estimated to have caused some 400million abortions and infanticides.

Chen Guangcheng, the Chinese political activist who escaped to the US, recounts in The Barefoot Lawyer, that during the policy’s ‘most coercive phase’, women with one child were inserted with a stainless steel tamper-resistant IUD, parents with two or more children were sterilised, and all ‘unauthorised pregnancies’ were aborted or babies killed at birth. The bloodletting was endorsed by the United Nations.

Today in China, Tibetan and Ugyhur women face rape, forced abortion and sterilisation. There are reports of a trade in human organs. The world watches and wrings its hands.

In India, the abortion of female children, identified by scanning technology, continues apace, as does female infanticide. Both practices are common in North Korea and throughout Afghanistan, ranked the worst place in the world to be female. The silence from the democratic, liberal West is loud.

In America, the Land of the Free, driven by nihilistic self-loathing, privileged and poor, black and white screech for more and easier abortion.

Abortion is, of course, big business for Planned Parenthood and a source of raw product for Big Pharma and research bodies, including the US National Institute of Health. All mRNA Covid ‘vaccine’ developments use human embryonic tissue.

The sad thing is that contraception in the US is widely available, cheap – sometimes even free – and mostly dependable. There are, it must be acknowledged, tragic circumstances where abortion is the most humane response to a non-viable pregnancy, and instances where the mother’s life is at risk. No one would argue against it in these cases.

However, the current protests have little to do with these traumas – we see a privileged generation devoid of compassion, lacking responsibility and seemingly incapable of forming an independent opinion. Blind to the true value of human life, none realise they are pawns in a much darker agenda.