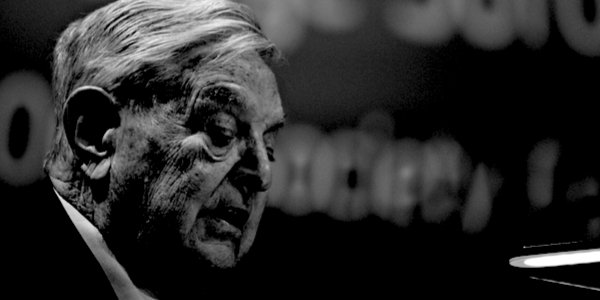 IN THE first two parts of this discussion of George Soros’s book first published in 1995, Soros on Soros: Staying Ahead of the Curve, we have seen that he is a disturbed and amoral man given to indulging his messianic fantasies with his billions.

A distortion of truth, further opaque ideas of open society and a malignant opinion of Zionism are some of the more intriguing elements found the third part of the book.

Contradiction, by now a recognisable component of Soros’s personality and philosophy, is again conspicuous. Soros reiterates his admiration for Karl Popper’s ideas, especially changeability without violence and the rights of minorities. But by this stage in the book it’s glaringly obvious that Soros, through his Open Society Foundations (OSF), has caused more havoc and destruction than the peaceful transitions which he originally sought to achieve.

Like Popper, Soros believes the world to be inherently imperfect. He writes that proving any understanding of the world and of ourselves as imperfect is an elusive pursuit – a nonsensical sentence and an example of his garbled thinking. Despite his grandiose vision of himself he admits to a belief in his own fallibility. Soros’s philosophy of the world offers a synopsis of his neurotic and negative nature. Just as disturbing is his notion that the idea of truth needs to be divided into three categories – true, false and reflective.

This odd concept, which Soros calls ‘reflexivity’, postulates that this third way of truth is uncertain yet still has meaning and plays a noticeable role in financial markets. How this is supposed to work is never properly explained. Soros is trying hard to make sense of the human condition, but to manipulate the understanding of truth in pursuit of this is a strange direction to take. How can there be a third understanding of truth? Either there is truth or there is a lie. A third categorisation of truth can only lead to delusion, discord and misunderstanding.

Rather than admitting his open society ‘philosophy’ is unworkable and unpopular, Soros claims his genius is misunderstood and that is why, according to him, the West has stupidly, and to its detriment, refused to embrace his ideology – providing yet another example of his megalomania.

Besides Soros’s incomprehensible musings on open society and reflexivity there is much in this part of the book that is still fascinating. Soros acknowledges that setting up OSF has unleashed conspiracy theories around him as an all-powerful Jew. Like Soros, I find this a disturbing development and on this I find myself in agreement with him. Soros is not ‘in the shadows’ as some of his anti-Semitic detractors like to accuse him of being. He is an intensely private man who prefers to distance himself from the world as part of a protective mechanism. No matter how destructive OSF and Soros are, anti-Semitic slurs against both are hateful and grossly unfair. As to his influence over the Democratic Party in the USA, which his critics claim has increased over the years, it is of public concern. Last year Soros donated more than £10million to the party. Criticising him does not make you an anti-Semite, but conspiracy theories about him based on anti-Semitic tropes are.

It is perfectly legitimate to criticise Soros, but the moment that criticism contains any derogatory references to Soros being Jewish or employs tropes such as Jews controlling the world, it strays into anti-Semitic territory. But critiques based on falsehood or misinformation, such as Donald Trump’s mistaken accusation that Soros funded the migrant caravan, should not be perceived as anti-Semitic if there is no negative inference to Soros’s Jewish identity. As Melanie Phillips points out, Iran and Hezbollah, not Soros, financed the migrant caravan.

Soros says that his experiences of being a Jew facing probable death during World War Two influenced his ideas. His hatred for nationalism, mainly in the form of socialism and fascism, shapes his concept of open society and is meant to avoid these twin evils. This explains why he is so passionate about dismantling nation-states and why OSF causes such havoc through its funding of Left-wing causes, from drug legalisation, euthanasia and abortion to open borders. Soros might object to the charge that he is funding ‘open borders’, but the practical application and consequences of OSF projects on migration result in exactly that. Instead of being the catalyst driving countries towards open society, these have instead created resentment, fuelled nationalism and made the lives of millions more miserable than they needed to be.

Migration is part of human history and experience. It works well when it happens gradually. But millions of migrants fleeing to Europe in such a short space of time creates a cultural and societal earthquake. And some of these migrants come from systemic anti-Semitic cultures. It is no coincidence that anti-Semitism has spiked in European countries which have had an influx of migrants from Islamist regimes.

Although Viktor Orban’s government has let anti-Semitic rhetoric flourish against Soros, most Jews in Hungary feel far more comfortable being openly Jewish there than they do in France or Britain, where they are subjected to horrific anti-Semitic abuse from the Left and Islamists. Despite the faux castigations and screeches of outrage from the Western European Left and elite that Orban is endangering Hungarian Jews, the evidence is to the contrary and serves to ‘out’ these protesters as the hypocrites they really are.

It is deeply ironic that through its funding of open borders OSF has contributed to the spike in anti-Semitism in Europe. Most of the threat to Jews comes from the Left and Islamism, but flourishing normalisation of anti-Semitism has also emboldened the far Right in their hatred of Jews. Surely Soros should have foreseen this? How utterly irresponsible it is of him to endanger Jewish lives like this. OSF, and Soros, need to accept their share of the blame for their role in making Europe unsafe yet again for Jews.

Soros’s obsession with dismantling sovereignty drives his political dogma and so it’s unsurprising to read that he was opposed to the establishment of a Jewish state. And Israel is a nation-state par excellence, with a strong sense of nationalism and strong borders needed for protection against its hostile neighbours. Soros wrote in his book that Israel’s new peace partners were Hamas. This lack of understanding of the geo-politics of this region would be laughable it was not for the fact that OSF has continued to have such a negative impact on Israel. OSF funds virulently anti-Israel organisations which incite terrorist attacks on Israeli citizens, propagates the anti-Semitic lie that Israel is an apartheid state and attempts to isolate, destabilise and ultimately destroy the Jewish State. If these OSF-funded organisations are left unchecked to continue along their anti-Semitic pathways, the lives of millions of Jews, both in Israel and the diaspora, could be in peril.

Soros says he is a proud Jew. But he actively works against Jewish interests. Anyone else would be described as an anti-Semite in this context. Yet he sees himself as the ultimate humanitarian, something that the Financial Times celebrated when they inexplicably made him Person of the Year.

His book shows that he is flawed and pathological. His neurotic mother and authoritarian father inflicted on him a grandiose self-image along with crippling self-doubt. In conclusion I found his philosophical ramblings disappointingly impenetrable and his megalomania concerning. Soros’s original motivations for establishing OSF are commendable but these foundations, made in his image are, for all their humanitarian intent, destructive and harmful to us all.