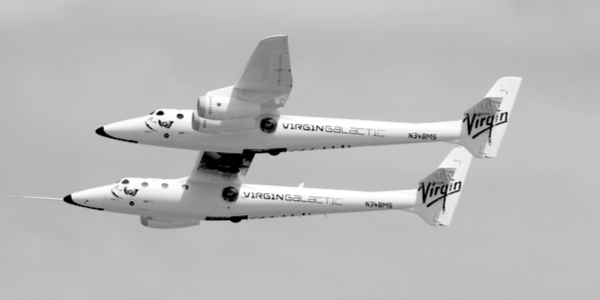 AS I watched the successful flight of Richard Branson’s passenger rocket ship on Sunday, memories came flooding back of how, as wide-eyed children, my pals and I would dream of blasting off into space.

I well remember the Soviets starting it all for us in 1957 by launching their bleep-bleeping satellite Sputnik 1 to the amazement of the world and us earthbound kids. We’d been brought up on Dan Dare and Journey into Space, and now comic strips and radio dramas were at last becoming reality.

We then became accustomed to USSR and USA experimental flights with various mice, dogs, chimpanzees and monkeys, some of which did not survive, poor things.

However, nothing could compare with the astonishing achievement of April 12, 1961, when the Soviet cosmonaut Yuri Gagarin became the first man in space.

The 27-year-old Russian test pilot made a single orbit of the Earth in his Vostok 1 capsule before parachuting out of it an hour and 48 minutes later at 23,000ft and landing safely near Saratov on the River Volga. It had been a risky ride, but Man was reaching for the stars! At the age of ten, my friends and I were agog.

In school, all talk was of Gagarin, and our enterprising teacher thought the flight would make an interesting project for our class. So, more in hope than expectation, he wrote to the Soviet authorities asking for some literature.

He struck gold. Soon after – to the envy of other pupils – we were deluged with scores of booklets, maps and charts in English detailing the whole mission in easy-to-understand terms.  I remember the excitement as the teacher gave us the blue-covered dossiers.

As far as I know, it wasn’t propaganda (a word none of us kids knew anyhow), just straightforward information with lots of photographs, diagrams and illustrations. We spent weeks afterwards copying pictures of Gagarin’s spaceship, writing essays about his flight and pretending to be him.

The triumph of Vostok 1 was lift-off, of course, for the frantic space race between the Soviets and the United States. Just 23 days later, the rattled Americans sent astronaut Alan Shepard up in a rocket called Freedom 7 – and henceforth poured billions of dollars into beating their Red rivals.

By 1969, the Americans had overtaken the Soviets and launched Apollo 11 on a manned mission to the Moon. Eight years on from Gagarin, my enthusiasm for space adventure was as strong as ever and the prospect of a Moon landing was awesome.

I had a summer job at a local factory that year, which meant rising at 5am for the early shift. However, I stayed up late on July 20 to watch the grainy television coverage of the lunar landing. Like millions worldwide, I was elated when we finally heard Neil Armstrong’s crackly voice saying: ‘Houston. Tranquility Base here. The Eagle has landed.’

It was hard to sleep. And at 5.30am, as I left for work, the Moon was still visible in the dawn sky. I looked up at it and thought: ‘My God, men are actually on the Moon.’ It was a wondrous, almost unreal, feeling, cherished as a milestone memory.

Amid the euphoria over Armstrong’s giant leap for mankind, there were fantastic predictions that within a few short years, rocket flights would become accessible to all and we’d be taking weekend breaks on orbiting space stations, or holidaying on the Moon instead of jetting off to Benidorm. More lunar missions came and went, so much so that they became routine – apart from the drama of Apollo 13.

But the age of the semi-detached suburban spaceman was not to be. With its astronomical costs, space flight remained the preserve of the expert few, affordable only by governments and carried out in the name of science and exploration rather than recreation.

However, in the past decade we have seen the advent of ambitious business billionaires such as Branson, who reckon they can make out-of-this-world travel easier and cheaper, and take on paying passengers.

On Sunday, the Virgin entrepreneur and five others made a sub-orbital flight in his VSS Unity rocket – built by his Virgin Galactic company – reaching the edge of space at 55 miles high before returning safely to a New Mexico airstrip.

Branson has now taken a lead in the mini space race with Amazon tycoon Jeff Bezos, who builds rockets via his Blue Origin company. Next Tuesday, Bezos plans to launch his New Shepard craft – named in honour of the US astronaut – taking him and five fellow travellers some 62 miles above Earth.

Although these are not orbital flights, and there is even a technical dispute about whether Branson’s rocket actually reaches space, it’s exciting stuff. You get a mind-boggling view of our planet and experience weightlessness for several minutes.

Yet things come down to earth with a bump when it gets to the cost … you need pockets as deep as a Martian crater to afford a flight. Virgin Galactic has apparently already taken 600 bookings at a whopping £250,000 each.

New Shepard fares are so far unknown, but presumably will be similar. We’re not talking economy class here – in June, a single seat on Bezos’s rocket ship was auctioned off to an anonymous bidder for 28million dollars.

Meanwhile, Tesla billionaire Elon Musk’s SpaceX Corporation will be flying four passengers to the International Space Station next year at a cost of 55million dollars a head.

So, like one of those new-fangled reusable rockets, things have come full circle – and space flight for the financially-challenged masses is sadly as far away as ever. It’ll remain a rich man’s plaything.

No matter. We ageing latter-day Dan Dares may never be able to afford a cosmic journey. But, having followed the stardust trail of the heroic Gagarin, Armstrong and other pioneer rocketeers all those years ago, we can still gaze up at the heavens and let our dreams take flight.