Spare the iPad and save the child 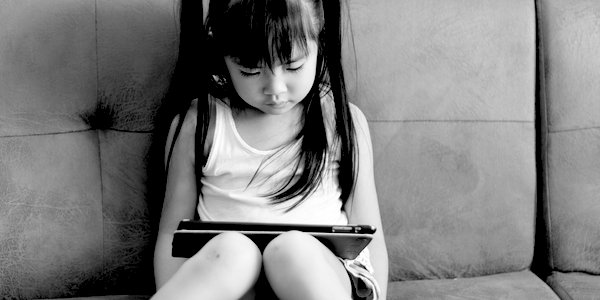 ust before the unhappy scene in Tess of the D’Urbervilles where the eponymous heroine’s horse Prince loses his life in a tangle with the morning mail cart, there is a poignant conversation between Tess and her young brother Abraham. Keen to move the subject off whether the Durbeyfields now ‘bain’t’ or are ‘gentlefolk’, Tess agrees that the stars in the night sky are indeed like worlds and are also ‘like the apples on our stubbard-tree. Most of them splendid and sound – a few blighted’. When the little boy presses his sister as to which kind they live on, she replies simply ‘a blighted one’.

There’s something about the apple. There it is causing bother in the Garden of Eden, as if there weren’t the odd reptile to deal with, there it is testing the crossbow skills of Mr Tell as his son concentrates on sitting still, there it is all juicy and poisonous in fairy tales with the usual evil stepmothers, and there it is yet again falling on somebody’s head as he’s sitting under a tree minding his own business and not expecting to have to start doing a load of equations. Whether it’s the narrative of a major world religion, central European folklore, or myths about scientific epiphany, this fruit has certainly embedded itself in our consciousness. A few of the clichés suggest something positive – ‘an apple a day keeps the doctor away’ – and some are more negative, such as the ‘bad apple’. Either way there is a sense of the power of the symbol – the load the apple carries for good and evil. But the inclination of some celebrities and global corporations to name their offspring and brands after it suggests they prefer to ignore the symbolism of temptation, evil and downright trouble.

This week brought news of a headache for the American IT giant Apple. A couple of major shareholders have requested that the company carry out research to find out how much harm its products such as the iPhone are doing to young people. The call comes after mounting concern about the effect of the smartphone on the mental health of teenagers and children. The activist investors, who control some $2bn Apple shares, have sent an open letter urging a response from Silicon Valley’s major player about the widespread phone addiction that psychologists are warning may herald a future public health crisis. Research by American academic Jean Twenge for her latest book iGen has alarming data on suicide risk. A recent study in the UK involving 1,500 parents found that children own their first mobile phone by seven, followed by a tablet at the age of eight and a smartphone at the age of ten. In the understatement favoured by the young, that is not OK.

Those of us who are optimists do believe that change for good is possible. It might take a few years but public attitudes can be shifted on what is and is not socially acceptable. Remember how it used to be the norm to be able to roll around from one side of a car to the other and seatbelts were seen only as accessories for motoring pedants? Remember how otherwise conscientious and respectable parents would think nothing of passing an afternoon in a 1970s summer beer garden and then driving the family home? Or how we used to get to the office and find people each side of us had lit up? Those were the days. It’s all changed, though, on the grounds of public health and common sense. Most people are probably persuaded that these changes are a good thing.

Things have to change now with this little gadget. We need to get smart with it all right. This was made clear in a warning a few days ago from the Children’s Commissioner for England Anne Longfield, who said that pre-teens were ill-equipped for the ‘avalanche of pressure’ by social media as they head into secondary school. She added that for many children the social media world dominates their social life. They crave ‘likes’ and comments as a way of validating their identity. What a nightmare. Who’d be wanting to send their little one off to Big School nowadays nowadays?

The writing is on the wall, if not on the screen. They can’t do it alone, but headteachers have a crucial role to play here. It has never been more incumbent upon them as leaders in both the primary and secondary sector to win the hearts and minds of parents (even the ‘hard to reach’ can be reached sometimes). As the New Year unfolds, it would be great to think that schools are planning week after week to bring in guest speakers (as happens about alcohol and drugs abuse) and put information out there in newsletters for parents about this other life-sucking addiction. They could be massively influential in changing the mindset, binning the notion that tech is always clever, always ‘smart’, when it plainly isn’t. Children are hurting and we need to do something about it. It needs to be seen as perverse and unacceptable to hand a child an electronic device, just as it would to supply a cigarette. It needs to be seen as dysfunctional and stupid for a family all to be heads down with their smartphones over a meal, just as it would for them all to be in the suffocating fug of a smoke-filled car with the windows up. If the young are going to have any kind of apple in their lives, let it not be their world. Otherwise their lives will be blighted in ways that ours weren’t.

Oh, and a New Year memo to other leaders and opinion-formers. Any chance of those on all benches of the House of Commons getting their heads up from their incessant tweeting and phone checking? You know, lead by example?